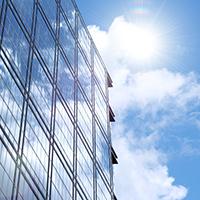 In response to ongoing global discussion about climate change and its impact on the natural environment, CBRE has committed to minimizing that impact for our company, clients and communities.

Buildings are widely viewed as a significant contributor to carbon emissions, and as the world’s largest manager of commercial buildings CBRE has both a responsibility and an opportunity to influence the way buildings are built, sourced, managed, occupied and sold.

This ability to drive sustainable real estate practices is a fundamental principal of our environmental leadership.

From Refill to Recharge: How Electric Vehicles are Changing City Infrastructure

Talk of electric vehicle proliferation has been occurring for years across the U.S. and around the globe, but the future of the auto industry is no longer merely on the horizon. Given the recent announcements from major car manufacturers planning to reduce the number of gasoline-fueled models and increase the amount of electric vehicle options, it seems that the industry’s future has arrived.

Flipping the Ship: A New Life for Decommissioned Vessels

The saying, “One man’s trash is another man’s treasure,” rings true, particularly when it comes to old ships that have been abandoned or fallen into disuse. Around the world, out-of-service vessels are being repurposed and transformed into thriving restaurants, hotels, museums and other waterfront attractions.

Sure, saving aging ships from the scrap yard eliminates seaside eyesores, but it’s also good for the environment. Derelict, rusted-out hunks of steel floating in oceans can be hazardous, wreaking havoc on marine life and coastal habitats, ultimately disrupting the ecosystem and posing threats to natural resources.

Whether created to save humans, animals or the environment, recent infrastructure developments from around the globe highlight how builders and architects are making environmentally friendly design a priority.

While corporate gardens are perhaps an unconventional office perk, the potential benefits are obvious enough—fresh air, exercise, team building and, of course, food (for company employees and their communities).

In light of the U.S.’s recent decision to withdraw from the Paris Agreement, some are wondering what kind of impact, if any, it will have on businesses and developers who have already pledged to keep their assets carbon-neutral.

As part of a new interview series, Green Conversations, we will be exploring the role of green initiatives in real estate.

After placing second last year, the Chicago market claimed the top spot with 66% of its space qualified as green certified according to the fourth annual Green Building Adoption Index study by CBRE and Maastricht University. San Francisco slipped to second, while Atlanta, Houston and Minneapolis again claimed spots in the top 5 in the 2017 report.

Since first advising the bank on the acquisition of the tower for a record $700 million in 2014, CBRE have provided project and change management at the tower to deliver the most highly certified building in Hong Kong.

CBRE is one of more than 250 businesses to have taken the pledge across a range of key industry sectors, representing a total of 260,000 employees.