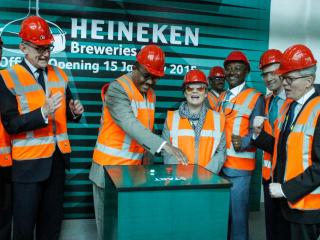 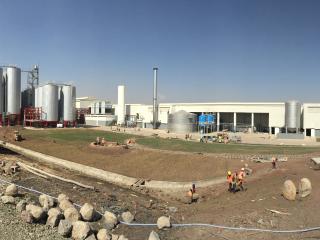 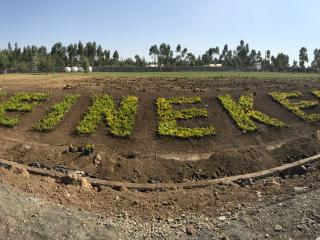 Amsterdam, January 19, 2015 /3BL Media/ – HEINEKEN officially inaugurated its new brewery at a greenfield site in Kilinto on the outskirts of Addis Ababa yesterday.  In a ceremony attended by 300 guests including His Excellency the Prime Minister Hailemariam Desalegn, Mrs Charlene de Carvalho - Heineken and hosted by Jean-François van Boxmeer, Chairman of the Executive Board and CEO of HEINEKEN, the state of the art brewery was unveiled. Guests were invited to tour the site and to hear opening addresses from the Prime Minister, Mr. Van Boxmeer and Johan Doyer, Managing Director of HEINEKEN Ethiopia.

With a total capacity of 1.5m hectolitres, the Kilinto brewery is already producing the recently launched Walia® beer together with Bedele® and Harar® beer brands. It is planned that the site will also brew other brands including the flagship Heineken® beer.

Employing around 280 people, drawn from the local workforce, the new facility complements the already established Bedele and Harar breweries; which were acquired from the Ethiopian government in 2011. The EUR110mln new brewery is part of a total EUR310mln investment in the country by HEINEKEN since 2011.

With this enhanced production footprint, HEINEKEN Ethiopia will be well placed to further develop its portfolio of high quality beers that will meet growing demand in the country.

Speaking at the opening, Jean-François van Boxmeer commented: “Our inauguration marks the latest chapter in our Africa story which began over 100 years ago. Today, we are a proud partner for growth in the region, investing ahead of the curve, and with a long-term ambition to create sustainable businesses. This is certainly the case in Ethiopia, which is progressively unlocking its natural potential for its people, and bringing prosperity to both the cities and agricultural regions. Through our local barley sourcing project, we can be certain that the positive effects of our investment here spread well beyond the brewery gates. The CREATE project that we announced in 2013, where the partners share the goals of improving the income of smallholder barley farmers and improving access to markets, will help us to increase our local sourcing of malt barley.”

His Excellency the Prime Minister Hailemariam Desalegn commented “HEINEKEN’s investment underscores the belief and confidence that the foreign investment community has in our country as a credible and safe investment destination. I also want to acknowledge HEINEKEN’s commitment to address key social issues such responsible consumption messages, clean water availability and sustainable local sourcing; as well as health and safety issues in and around its breweries.”

Johan Doyer, Managing Director of HEINEKEN Ethiopia, added: “This new facility, which more than doubles our potential output, will enable us to satisfy rising demand for local and international brands. In 2014, we launched our Walia® beer brand and its success has shown that the beer category in Ethiopia has huge potential. This modern, flexible and efficient brewery will help us meet that demand and to bring new and exciting products to market. Importantly, we have recruited local talent and will build the skills and capability of a committed workforce.

With the opening of this brewery, HEINEKEN Ethiopia has now reached a key milestone.
Our next challenge is to prepare for the production of our flagship Heineken® beer which will provide a super-premium choice for our consumers and trade customers.”

Notes to editors:
The new HEINEKEN Brewery is located in Kilinto, Addis Ababa Municipality. It is Ethiopia’s biggest brewery and will produce up to 1.5 million hectolitres of Walia®, Harar®, and Bedele® and will shortly produce the Heineken® beer brand.

What does “Partner for growth” in Africa mean to us?

2.         Investing in people, creating jobs and building skills for the future

HEINEKEN has a long history with Africa. Already in 1900 HEINEKEN was exporting beer to various African countries (Ghana, Nigeria, Liberia and Sierra Leone). In 1923 we established our first brewery in the DRC. Africa is a major part of our overall business: it provides 14.5% of our revenue/ 14.1% of our beer volumes. And the continent is really moving fast.  We are investing massively in Africa: over EUR2.5bln since 2007, including over EUR300mln in Ethiopia the last four years. In Africa, HEINEKEN supports 1.1 mln direct and indirect jobs.

For many years we expanded our business across the continent and in 2011 we made the acquisition of Harar and Bedele Breweries Ethiopia. In 2012 we commenced the construction of a new Greenfield brewery, which we have announced as fully operational in January 2015. We have also signed two Public Private Partnerships; the CREATE project to provide locally sourced malting barley, and a water access project to provide clean water to 50,000 people in Harar.

The Ethiopian beer market is growing. The market practically doubled over the last 5 years and the per capita consumption is still relatively low compared to other East African markets. The main drivers for growth are a growing population, urbanisation and rising incomes. HEINEKEN’s key brands are Bedele Special, Bedele Regular, Harar, Hakim Stout and Sofi Malt.

HEINEKEN has committed to sourcing at least 60% of all its raw ingredients needed for production in Africa from within the African continent by 2020. In Ethiopia HEINEKEN entered a Public Private Partnership, CREATE, in 2013, aimed at improving both quality and quantity of barley grown in Ethiopia as well as improved access to markets for farmers. This has already enabled HEINEKEN to support local smallholder farmers to supply our breweries and drive this desired increase in local sourcing.  After only two years in operation, our programme is already supporting c6,000 farmers, and by 2017, it is our plan to be supporting c20,000 farmers and their families, producing some 20.000 MT of malted barley.

HEINEKEN is a proud, independent global brewer, committed to surprise and excite consumers with its brands and products everywhere. The brand that bears the founder's family name - Heineken® - is available in almost every country on the globe and is the world's most valuable international premium beer brand. The Company's aim is to be a leading brewer in each of the markets in which it operates and to have the world's most valuable brand portfolio. HEINEKEN wants to win in all markets with Heineken® and with a full brand portfolio in markets of choice. The Company is present in over 70 countries and operates more than 165 breweries. HEINEKEN is Europe's largest brewer and the world's second largest by consolidated volume. HEINEKEN is committed to the responsible marketing and consumption of its more than 250 international premium, regional, local and specialty beers and ciders. These include Heineken®, Affligem, Amstel, Anchor, Biere Larue, Bintang, Birra Moretti, Cruzcampo, Desperados, Dos Equis, Foster's, Newcastle Brown Ale, Ochota, Primus, Sagres, Sol, Star, Strongbow, Tecate, Tiger and Zywiec. Our leading joint venture brands include Cristal and Kingfisher. The number of people employed is over 81,000. Heineken N.V. and Heineken Holding N.V. shares are listed on the NYSE Euronext in Amsterdam. Prices for the ordinary shares may be accessed on Bloomberg under the symbols HEIA NA and HEIO NA and on the Reuter Equities 2000 Service under HEIN.AS and HEIO.AS. HEINEKEN has two sponsored level 1 American Depositary Receipt (ADR) programmes: Heineken N.V. (OTCQX: HEINY) and Heineken Holding N.V. (OTCQX: HKHHY).
Most recent information is available on HEINEKEN's website: www.theHEINEKENcompany.com and follow us via @HEINEKENCorp

Growing Together: Real Stories of Local Sourcing in Africa