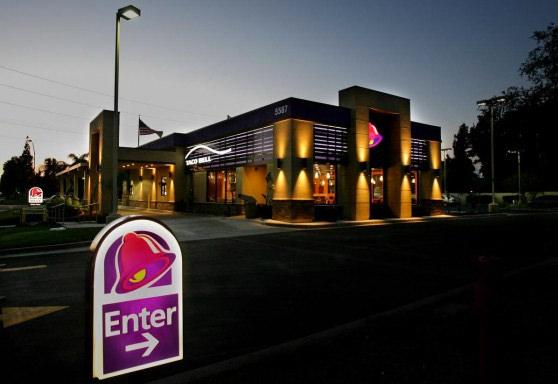 Taco Bell's focus on reducing its footprint can be seen all the way in sunny Southern California.

Taco Bell is focused on exploring ways to use its scale for good, and reduce its environmental footprint. This exploration has ignited a fire in the brand to become a leader in sustainability in ways that are both good business and the communities we operate in.

In sunny Southern California, franchisee Grover Moss, brought these savings to life in his own restaurants. Just recently, Moss reopened one of his Taco Bell restaurants in Riverside, California with a whole new look. Thanks to solar panel-powered lighting, his restaurant now shines every night with a new purple splash.

Moss, an early Taco Bell operator since 1967, and owner of 11 franchise restaurants loves how the tiled panels behind the “Bell” shimmer, and the parking lot lights shine with low-voltage lighting. But he doesn’t just love the redesigned look. Moss said he thinks he’ll achieve a return on investment (ROI) much faster because of the redesign. “I hope to achieve 50 percent or better savings on this store than the old store,” Moss said, and get a return on investment within a few years – a rebuild (with solar panels) in the LA area can cost much more than the traditional remodel.

As part of the remodel, this restaurant features great new modern fixtures including a new food preparation and storage area, counters, furniture, lighting and reflective glass. What’s great about the solar panels on the restaurant is they will soak up the rays AND provide shade for customers and the building in the drive-thru.

The Riverside restaurant and Moss were also featured recently in the Press Enterprise for the new look. To read the article, click here.

Through Taco Bell‘s participation in Yum!‘s green building roadmap called Blueline, the brand plans to build 100% of all new company stores as LEED certifiable by the end of this year.

To learn more about Yum! and its brands Green Building efforts visit, http://yumcsr.com/environment/green-building.asp.

KFC Philippines To Have 54 Solar-Powered Stores by Q1 2023

How I Got Here: Aaron Powell