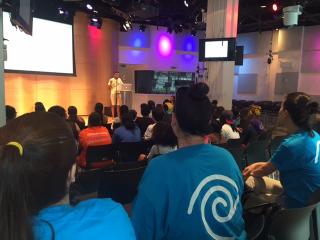 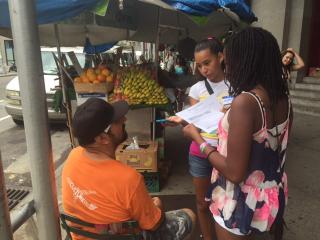 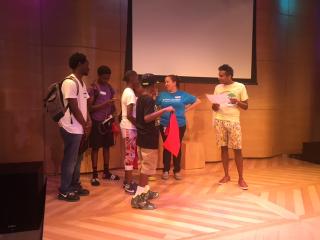 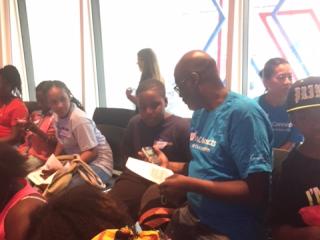 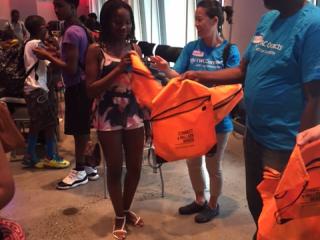 In a unique partnership with New York Public Radio (WNYC)’s Radio Rookies program, and in support of our Connect a Million Minds commitment, Time Warner Cable employee volunteers helped introduce middle school students to the field of radio journalism. Through regular workshops, this Peabody Award-winning program gives young people the tools and training they need to tell stories on air about themselves and their communities. Rookies’ stories present the wide range of issues that America’s youth face today: from the challenges of immigrating to the United States, to coping with a life-threatening disease, to navigating gender and sexuality stereotypes.

In a three-week program this summer, forty public school students from Manhattan and Brooklyn learned about the science, technology, engineering, and math (STEM) principles behind producing and airing radio journalism, while also fine tuning their interviewing, writing, and critical thinking skills. On July 21st, groups of students put their new skills to work, as they teamed up with TWC employees, across marketing, technical operations, sales, and customer care departments, and hit the streets on a sound-bite scavenger hunt. The Radio Rookies were tasked with finding and interviewing New Yorkers who had met President Obama, gone skydiving, written books, and more (a.k.a. vox pop—interviewing the public). But before heading out, the students heard from Sean Rameswaram, a NYPR Studio 360 producer, who introduced the group to podcasts. After sharing an example from his own podcast, sideshow, he played an audio reel of the students’ own work from the previous day’s workshop.

This was an especially rewarding volunteer opportunity for the TWC employees in attendance, as they successfully encouraged the Radio Rookies to break out of their comfort zones, speak clearly and professionally in their interviews, and most importantly, have a great time. Many of the volunteers had chosen to participate in this event because of their personal interest in radio and broadcasting, and were able to share their own passion and knowledge with the students on their teams. The outcome of this event truly shows the power and influence of employee engagement with our partner organizations, as it has left a lasting impression on both the Radio Rookies and TWC employees.

This workshop is just one component of the Radio Rookies program, which, overall, reaches hundreds of youth across NYC each year. During the program’s extended, 6-9 month workshops, participants script and produce full-length audio documentaries that are aired during NPR's Morning Edition and All Things Considered programs, to more than 8 million listeners annually. TWC supports Radio Rookies workshops across New York City, in predominantly under-resourced neighborhoods, training young people in the technological and engineering related aspects of digital audio production and journalism. Many Rookies participants have pursued careers in journalism, communications, and media, ensuring that they will bring their diverse voices to these industries.

Not only does the Radio Rookies program align with TWC’s commitment to promoting STEM learning and emersion for middle school students, but it also provides the students with transferrable skills that put them on a path to success in both academia and a variety of future careers. Perhaps the most outstanding aspect of this program is that these new STEM skills have allowed the students to further connect with and tell the often unheard or misrepresented stories of their communities, and become positive role models and leaders among their peers.

Imagination Explored Around the World During the Earth Day Cardboard Challenge