Feb 5, 2018 8:00 AM ET
Campaign: Sustainable Solutions for Our People, Our Projects, and Our Planet 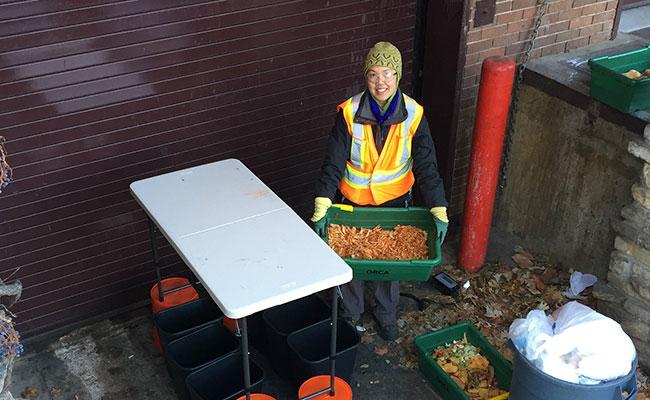 “Lobster heads—edible or not?” I asked my colleague Melissa as we opened a bag of trash from a commercial waste audit.

As we picked through the smorgasbord of vegetable peels, leftover pasta, and seafood parts, she replied, “Well, the meaty parts are the tail and the claws. There isn’t much else in the body and head.”

“Yeah, but there are bits inside that you can eat,” I added. “My relatives [originally from Southern China and Vietnam] all eat lobster that way.”

The verdict? The lobster heads went in the edible meat and seafood bucket.

This is only one of many conversations that Melissa and I had over the past couple years as food waste characterization studies became increasingly common. Food waste has become an increasingly important topic for government, businesses, and communities, with an estimated 1 billion tons wasted each year worldwide. In 2015 the U.S. Environmental Protection Agency announced a 50-percent national reduction goal to be achieved by 2030. To track progress towards that goal, we need detailed data on food waste.

Until recently, the norm for waste composition studies in the United States was to characterize food waste at a broad level. Food waste was grouped with organic material or separated as its own category. Some studies further separated packaged food or food that is backyard compostable. However, these studies did not capture details such as the type of food or edibility.

In 2016 the NRDC conducted the first study of its kind in the United States to collect detailed food waste data from the residential and commercial sectors. NRDC engaged Tetra Tech to help develop a methodology and implement the data collection program. As the project manager, I was tasked with scientifically dumpster diving to collect representative samples of trash and consistently sorting food waste into detailed categories (e.g. inedible parts, fruits and vegetables, meat, baked goods) across three American cities.

While separating food by type was fairly straightforward, defining edibility was a challenge. Given the vast cultural diversity in the United States, what is edible for some people may not be edible for others. We had to make some calls—like deciding potato peels are edible but watermelon peels are not—and developed a detailed category list for our field staff to ensure each of our samples was sorted in a similar fashion.

We were able to maintain consistency for the NRDC project, which is just one of the growing number of data sets on food waste composition being published. However, the definitions of what is edible and what types of food belong in which category are subjective—and not necessarily consistent among different studies. The scope of such studies and assumptions may also differ, as each study has different objectives or a different regional context. So far, to customize the results for clients, each food waste composition study completed has been slightly different. However, when you start compiling or working among data sets, you could literally end up comparing apples to oranges if you are not careful.

To help ensure researchers are comparing apples to apples, the Food Loss and Waste Protocol, a multi-stakeholder partnership of global leaders working on food loss and waste, developed a Food Loss and Waste Accounting and Reporting Standard (FLW Standard). The FLW Standard is a voluntary standard that companies, governments, cities, and others can adopt to better measure and track food waste. It also provides definitions, such as the difference between food and inedible parts, and a standardized reporting framework so data can be correctly interpreted and compared. The FLW Standard also offers flexibility based on cultural context, offering examples such as “chicken feet are consumed in some food supply chains but not others.”

If more organizations working on food waste measurement adopt the FLW Standard and publish their data using its reporting framework, then more data will be accessible and available to track progress towards United Nations Sustainable Development Goal 12.3 to reduce food waste worldwide.