Cultural Changemakers Have a Powerful Role in Promoting Climate Action

Dec 1, 2022 11:00 AM ET
Campaign: Changing the Game: The Sports and Entertainment Sector Embraces the SDGs 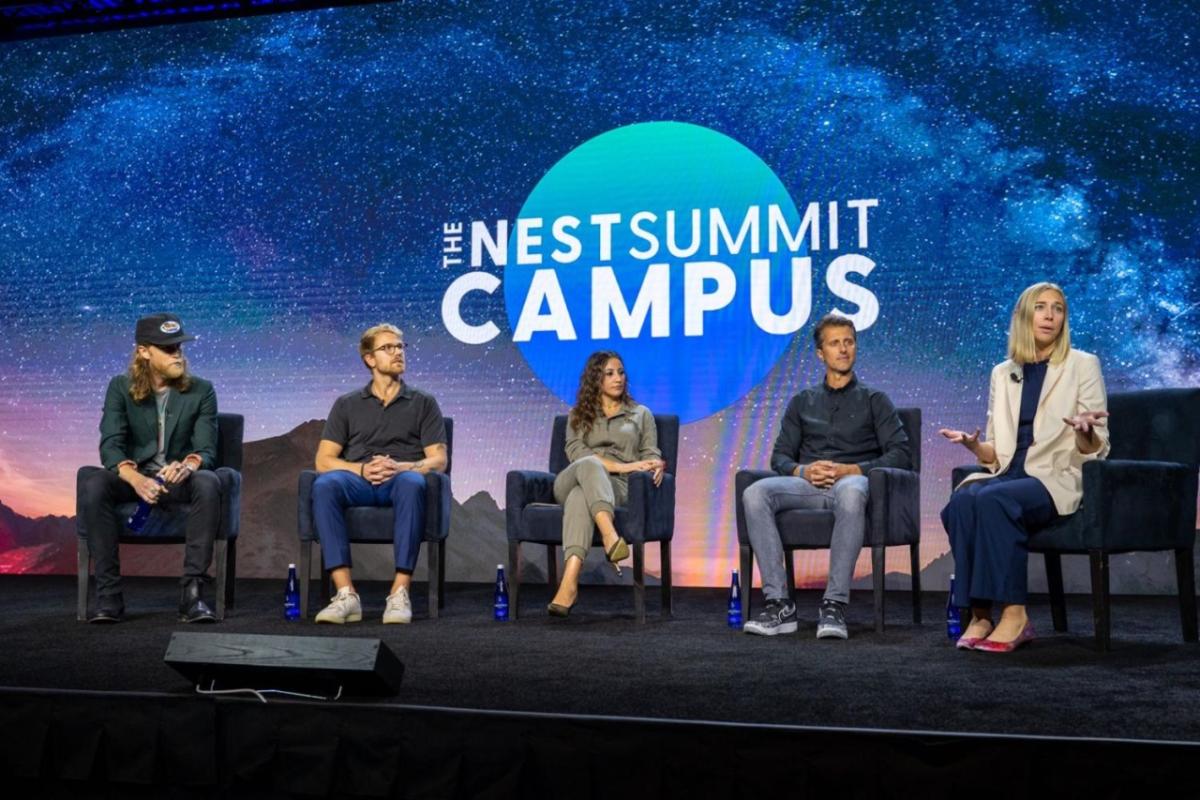 Photo: Panelists talk at the Nest Summit Campus NYC Climate Week event earlier this fall. The panelists, from left to right, are: Westley Schultz, co-founder of and lead vocalist for The Lumineers; Colin Wilson, retired player for the NHL's Nashville Predators and Colorado Avalanche; Sofi Armenakian, Head of Sustainability for the Atlanta Hawks and State Farm Arena; Erik Distler, VP of Sustainability at AEG; and Cassie Lee, CEO of Sound Future

With popular bands embarking on months-long tours and sports teams traversing to away games dozens of times each season, sustainability may not first come to mind when thinking about the events and entertainment industry. But leaders in the sector — from athletes and musicians to executives — are hoping to reshape that narrative through awareness-building campaigns and climate action initiatives.

A panel of experts took center stage at the NEST Summit Campus during New York’s Climate Week this fall to discuss the role of cultural changemakers, and the broader entertainment industry, in promoting climate action and environmental sustainability. Cassie Lee, CEO of Sound Future, a nonprofit deploying environmental solutions for the live event industry, said the gathering power of events “should do good and can do good.”

Events have the potential to be unrivaled social agents and cultural connectors that inspire feelings of camaraderie and a push for positive change. “In this industry, we have the opportunity and responsibility to bring people along, make sustainability inspiring, and make it a little more engaging than what you find in the news on a daily basis,” said Erik Distler, vice president of sustainability at AEG, the world’s leading sports and live entertainment company.

As the host of more than 160 million people across 22,000 live events last year, AEG’s international reach presents an opportunity to bring its fans along the company's journey toward making a more positive impact on the planet.

Sofi Armenakian also sees the power of fan engagement firsthand in her role as the head of sustainability for the NBA’s Atlanta Hawks and State Farm Arena. In April, the Hawks’ home at State Farm Arena became the world’s first sports and entertainment venue to earn zero-waste certification. In less than two years, the arena went from diverting just 10 percent of all waste from landfills to diverting a minimum 90 percent of all waste from the roughly 175 events it hosts annually.

Armenakian credits partnerships as the key to driving sustainability success. “We all know there’s a real crisis. We all know we need to take action,” Armenakian said. “In order to take action and make the needle go in the right direction, we really need to partner up and collaborate and truly meet people where they are.”

Fan engagement and collaboration among industry stakeholders is also key to the Sports for Climate Action Framework — which challenges industry stakeholders to leverage sports as a "unifying tool to drive climate awareness" among the public. Launched in 2018 by industry leaders together with the United Nations, the Framework now includes over 100 signatories, including AEG sports teams like the Los Angeles Kings and Los Angeles Galaxy as well as leagues like the World Surf League, National Basketball Association, and Formula E.

On the live entertainment front, The Lumineers — a Grammy-nominated band co-founded by vocalist Wesley Schultz — are among those leading the way in this space, headlining one of the world’s first “climate-positive” tours in 2020.

The Lumineers’ 2022 Brightside World Tour replicated this climate success and featured a stop at Atlanta’s State Farm Arena in August. The band and arena partnered to offer fans who recycled the chance for seat upgrades, autographs, and other prizes. Schultz joined the panel in New York and said that although tours are “inefficient by nature,” there are ways to meaningfully lessen impact — for example by offsetting a tour’s carbon footprint, eliminating single-use plastic bottles and powering down the buses during shows.

While music stars like Schultz and sports athletes like former NHL player Colin Wilson, who also spoke on the panel, have powerful roles to play in changing the conversation, Distler of AEG said, it's also important to celebrate the “true sustainability leaders” — the back-of-house efforts and staff who sort through waste bins, replace halogen lighting with more efficient LEDs, and make these incremental changes at venues possible.

For its part, AEG has moved to reduce waste at venues and was among the first entertainment companies to adopt a science-based emissions reduction target in 2016, to then more aggressively revise the target in 2019 in accordance with updated guidance on global warming and more stringent emissions standards. The company continues to report on its public-facing targets and sustainability program to communicate progress to stakeholders and fans, and also to discuss challenges, issues needing addressed, and what hasn’t been solved, Distler said at Climate Week. Transparency, accountability, and focusing on progress over perfection is important to AEG, he added.

Overall, the journey toward sustainability in the sports and entertainment sector — which began with stadium recycling bins and evolved to zero-waste commitments and net-zero emissions trajectories — is far from over. But leaders are moving the needle with ambitious targets, holistic programs and by inviting the fans to join the experience.

“We were on a journey to become zero-waste, but now it’s a forever journey,” Armenakian said. “There is no finish line.”