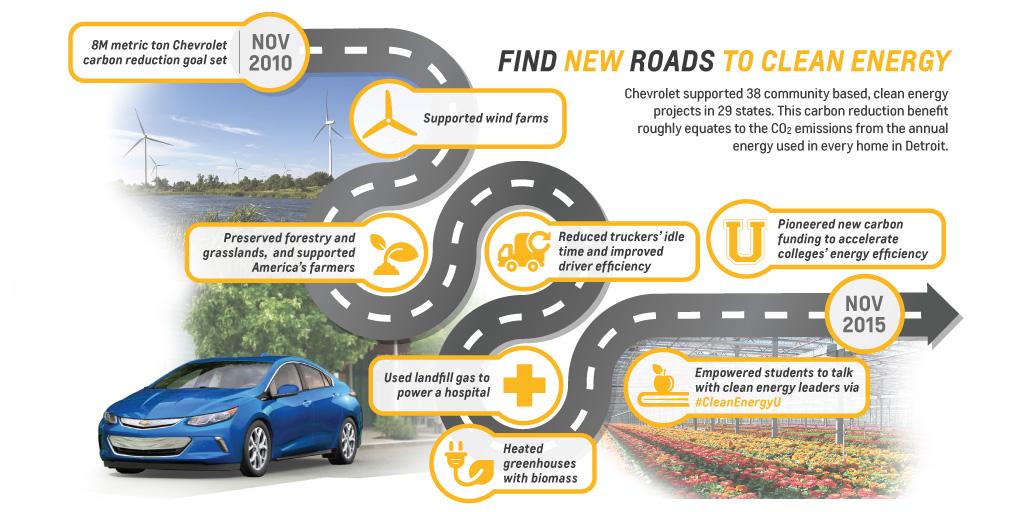 DETROIT, November 18, 2015 /3BL Media/ – Chevrolet over the last five years has prevented 8 million metric tons of carbon dioxide from entering the earth’s atmosphere, roughly equivalent to the CO2  emissions from the annual energy used in every home in Detroit.

The brand’s voluntary goal of engaging communities across America encompassed 38 projects, a $40 million investment, and led to creation of a self-sustaining clean-energy conversation with college students via #CleanEnergyU.

“Chevrolet launched this carbon-reduction initiative in 2010 when we debuted the Volt to demonstrate our commitment to a clean energy future,” said Alan Batey, General Motors North America president and Global Chevrolet brand chief. “Since then, our Volt customers have driven 700 million electric miles and renewable energy is powering nearly a tenth of our company’s U.S. energy consumption.

“This initiative helped us to fuel the clean-energy movement with our customers to inspire more change.”

The brand collaborated with hundreds of climate stakeholders and supported carbon-reducing projects in 29 states that have a positive impact on people, from helping a landfill heat a hospital with methane gas to helping truckers avoid idling their engines at rest stops.

The brand retired all the carbon credits to benefit the climate instead of using them to offset emissions of its vehicles or operations.

“I don’t think I will see again in my professional lifetime the kind of leadership – the sheer scale, the investment, commitments, diversity of team – that Chevrolet pioneered with its carbon-reduction initiative,” said Bob Sheppard, corporate sustainability consultant and advisor to the Chevrolet program.

This pathway enables other companies to support colleges’ continued investments in clean energy. The effort earned an EPA Climate Leadership Award for Innovative Partnerships and received the Top Project of the Year Award in the Environmental Leader Product and Project Awards in 2015. The carbon-reduction initiative also helped Chevrolet debut on Interbrand’s Best Global Green Brands report.

“What’s truly remarkable here is the legacy that Chevrolet has created,” said Second Nature President Tim Carter. “Chevrolet started something that will serve the greater good far more broadly as dozens of new campuses come together with us here at Second Nature to engage new purchasers and expand this campus energy efficiency market exponentially. It’s much easier for other companies and campuses to follow their lead now: The hard work has been done.”

Chevrolet partnered with several organizations throughout the initiative, such as Bonneville Environmental Foundation; Climate Neutral Business Network; Verified Carbon Standard; DNV GL; the American College and University Presidents' Climate Commitment managed by Second Nature; the U.S. Green Building Council; and the Association for the Advancement of Sustainability in Higher Education.

Editor’s note: GM Sustainability Director David Tulauskas will participate in a #CleanEnergyU conversation with student clean-energy leaders on Nov. 18 at 2 p.m. EST. Tulauskas will discuss why the Chevrolet carbon-reduction initiative was strategic for the company, campuses and broader climate goals. Follow the chat or send a tweet.

Founded in 1911 in Detroit, Chevrolet is now one of the world's largest car brands, doing business in more than 115 countries and selling around 4.8 million cars and trucks a year. Chevrolet provides customers with fuel-efficient vehicles that feature engaging performance, design that makes the heart beat, passive and active safety features and easy-to-use technology, all at a value. More information on Chevrolet models can be found at www.chevrolet.com.