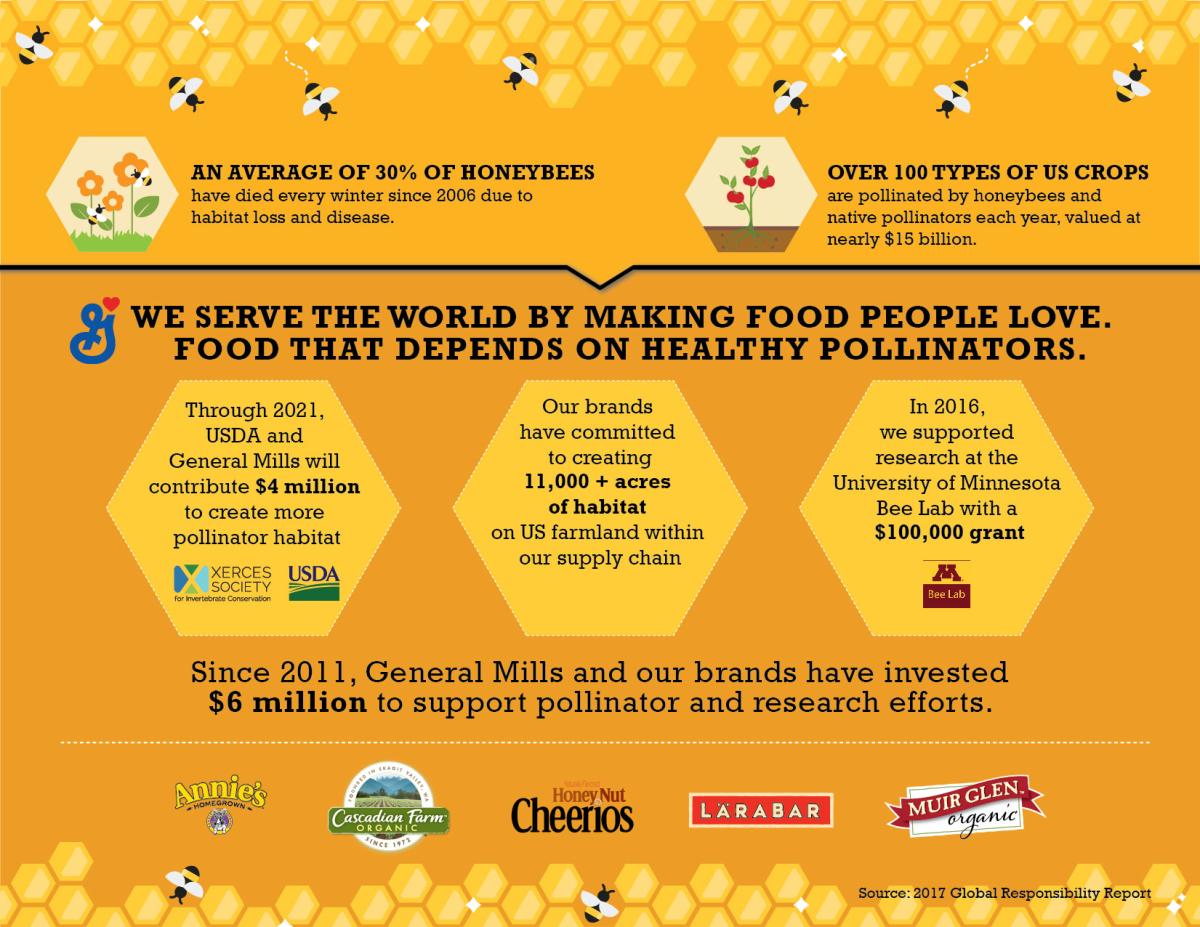 We serve the world by making food people love. Food that depends on healthy pollinators.

Since 2011, General Mills and our brands have invested $6 million to support pollinator and research efforts.

Bees Help Grow Over 35 Percent of Our Food Crops. Meet the Woman Trying to Save Them.

One June day in 2014, Beth Robertson-Martin found herself standing on a dirt road dividing two California tomato fields. On one side sat a farm that was nothing more than a 300-acre carpet of dried-out dirt. "It looked like a scene from Mad Max," she remembers. "Everything was dead." On the other side was a 6-foot-tall hedgerow, a tangle of white-blossomed milkweed, sunflowers and elderberry bushes that General Mills had planted alongside the tomatoes to create a habitat for bees, butterflies and other pollinators.

Pollinator Habitats Are Declining Worldwide, But Business Can Help

Bees are necessary to pollinate plants, including crops we use for food, but bee populations are in decline worldwide. For well over a decade, colony collapse disorder (CCD) has shaken the agricultural sector and challenged scientists. This mysterious phenomenon occurs when the majority of adult worker bees in a colony disappear, leaving the queen behind.

At General Mills, we love bees. Not just Buzz Bee, the famed Honey Nut Cheerios mascot, but all bees. Here’s why:

Simply put, without bees, we wouldn’t have enough food to feed the world’s growing population.

From the Field: New Meadow Blooms at Cascadian Farm

​Nestled in the foothills of the breathtaking North Cascades mountain range in western Washington’s Upper Skagit Valley, Cascadian Farm is now even more beautiful with the addition of a showy new meadow.

Going All In for the Bees in France

While we’ve had a long-standing connection to the Xerces Society in the U.S., the General Mills partnership with the French Observatory of Apidology (OFA) in Southern France has taken flight over the last couple years, with more than $200,000 in grants to the organization to help it make an impact across Europe.

The Bee Lab Takes On a Big Threat to Bees

People know how to protect themselves from disease, but what about bees? Varroa mites are one of the most significant threats to honey bee health today.

The Xerces Society is on the forefront of protecting pollinators in the U.S. and we’re proud to partner with them. In this episode, you’ll hear about their mission from Eric Lee-Mäder, who co-directs the Xerces Society’s pollinator conservation program. And you’ll find out how you can help, too.

How an Almond Orchard Solved Its Need for Bees

More than 80 percent of the almonds sold worldwide are grown in California. The state also is home to one of the best examples that we know for creating habitat for honey bees and other native pollinators needed for bountiful almond production.