While the World Was Sleeping, ScottsMiracle-Gro Associates Brad and Sam Were Running 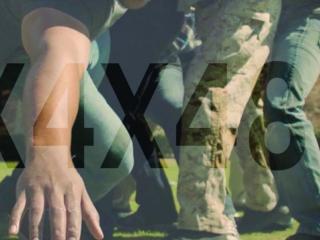 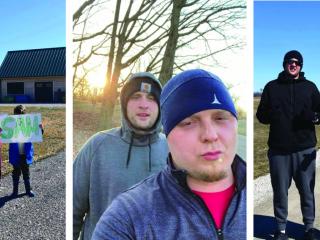 It happened quietly, over the weekend, with only a few people watching. In a way, that’s kind of the way they wanted it.

A four-mile run then a four-hour break.

Then a four-mile run and another four-hour break. Four miles, four hours… all running, no walking. Middle of the night, early in the morning. Didn’t matter. Time for another four.

The four-milers happened a total of 12 times for a total of 48 miles over a 48-hour period at and around ScottsMiracle-Gro headquarters in Marysville, Ohio.

Most of us can’t imagine running that many miles in such a short amount of time, but Brad and Sam had additional motivation on their minds and in their hearts.

It was coming up on the three-year anniversary of the tragic suicide of Brad’s brother-in-law. When running the 4 x 4 x 48 challenge, people are encouraged to run for a cause and raise money for an issue that means a lot to them. Considering that anniversary, Brad and Sam chose Save A Warrior in an effort to honor Brad’s brother-in-law, to raise money and awareness related to rising veteran suicide numbers and to help where they could. Sam’s mom has had some mental health struggles, so the cause hit home with him, too.

Brad and Sam connected with their operations manager and also our Scotts Veterans Network to let them know about the cause and their plan to support veterans. Brad and Sam got the green light to move forward with the challenge. Next came the hard part (besides the running): raising money to support the cause.

By design, Brad and Sam generated the majority of the support for their first 4 x 4 x 48 challenge on their own. The run itself and the Save A Warrior cause were personal to them, so they said to each other, let’s do this organically and see what we can do on our own. They created a fundraiser on Facebook, they accepted cash donations and they started to get some momentum going. The Scotts Veterans Network sent a check to Save A Warrior on behalf of Brad and Sam, and the news of what they were doing started to spread. Once the challenge began and Brad and Sam started posting selfies after each four miles, people were inspired, and they were donating to the cause.

During the run, Brad and Sam had some supporters encouraging them along the way. Brad’s brother-in-law’s parents walked one of the legs with them as they ran, and Sam’s dad came to root on the runners. The love didn’t stop there. Scotts associates showed up to cheer them on, too. Their managers bought lunch for everyone that weekend, and some associates even ran a lap with them.

Brad and Sam definitely felt the love from their own families and their work family.

When all of the miles were finished and all of the energy was drained from their tired legs, Brad and Sam raised nearly $6,000 for Save A Warrior. Just as they pushed themselves to their limits, they organically generated those donations to help veterans in need.

A story like this truly defines what it means to GroMoreGood. Though they could hardly walk after finishing those last four miles, Brad and Sam are already thinking about next year. The plan is to go big and generate even more support for the cause. A huge thanks goes out to Brad and Sam for the incredible work they did to help Save A Warrior and to exemplify the spirit of GroMoreGood.

Meet more of our associates who are making a difference.

ScottsMiracle-Gro: Celebrate Spring by Getting Outside