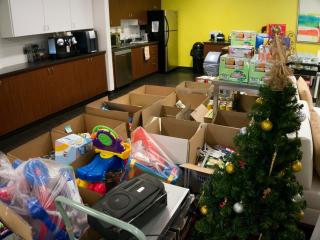 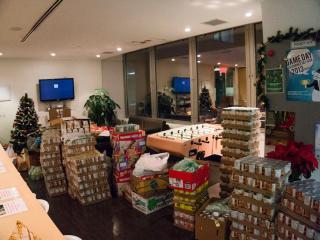 The 2013 Spirit of Giving campaign will be remembered as the year the cafeteria was occupied by skids of canned soup and countless boxes of lots of other non-perishable goods and toys. What was pegged as the 14th floor versus 15th floor competition between Vigilant Global employees essentially became a classic Vigilant showdown between founding partners.

The 15th floor was significantly outnumbered but was in the lead up until the moment some employees from the 14th took a trip upstairs and saw for themselves how the 15th floor had them beat. That was only a few hours before the donation deadline. A few phone calls later, and a generous donation led to the 14th floor’s eleventh hour shopping spree. It was down to wire but the 14th managed to outdo the 15th.

Vigilant Global employees came through for needy Montreal families this holiday season with well over $4000 worth of food, diapers, toiletries, and toys. Not a bad total for 100 employees with a 10-day timeframe.

The items will be distributed among seven local non-profit organizations such as Share the Warmth, NDG Food Depot, and Dans la Rue, who cater to the city’s less fortunate.

Risk vs. Reward: In the Markets and on the Water

Recognizing Those in Our Industry Who Give Back

The Power of an Education