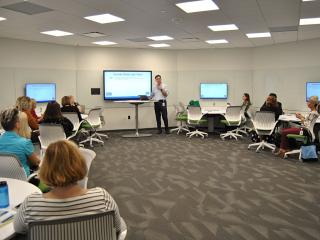 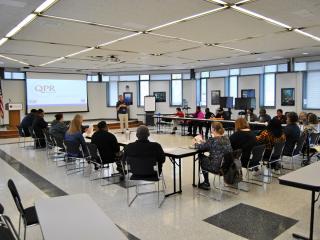 Similar to CPR, QPR is designed to support an emergency response to someone in crisis and to save lives.

While homicide garners much media attention both locally and nationally, suicide is more pervasive.

According to recently published data from the Centers for Disease Control and Prevention (CDC), suicide rates are on the increase, and more than half of people who die by suicide do not have a known mental health condition.

“The rate of suicide death in Louisville is far too high,” said Dr. Val Slayton, regional vice president for Health Services at Humana. “One of the top goals of the Louisville Health Advisory Board is to make Louisville a “Zero Suicide” city. Each of us encounters friends and family members struggling with depression and thinking about ending their lives. QPR training equips people to recognize warning signs of suicide, offer hope, and refer to resources. Early recognition of suicide warning signs can be key to saving a life.”

QPR training was offered for free in Louisville. No specialized mental health care training or expertise was required for participants. Approximately 40 certified trainers discussed myths about suicide, warning signs, how to talk with someone who may be thinking about suicide, and how to persuade them to seek help.

Organizers had set a goal of establishing a Guinness world record for training the most people in suicide prevention in a single week.

“To our knowledge, no baseline for a record had been set,” said Dr. Slayton. “We accomplished a tremendous amount in Louisville, and we hope other cities will follow in our footsteps.”

Thriving Together in Today’s Multigenerational Workplace