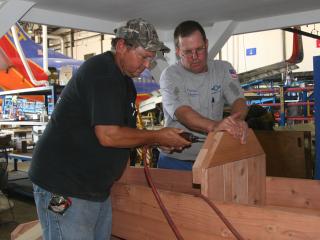 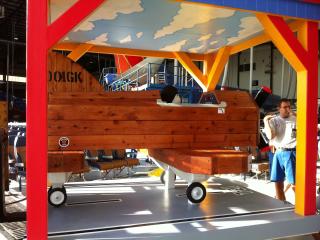 (3BL Media) Dallas, TX - July 31, 2012 - Southwest Airlines’ (NYSE: LUV) Maintenance & Engineering Employees are rolling up their sleeves and using their tools for a worthy cause.  The airline’s Mechanics donated hours off the clock to build an aviation-themed playhouse that will be raffled off at the annual Court Appointed Special Advocates (CASA) Parade of Playhouses at NorthPark Center, benefitting the local Dallas CASA chapter.  Today, Southwest Mechanics put the finishing touches on the playhouse and loaded it onto a truck bound for NorthPark Center. The Parade of Playhouses will be on display at NorthPark Center Aug. 3 through Aug. 19. To participate, mall-goers can purchase a raffle ticket either in person or online at dallascasa.org. Tickets are $5 each or five for $20.

Each year for the past five years, Southwest Mechanics have donated their time to construct a creative, aviation-themed playhouse in an effort to raise funds for CASA, a nonprofit network that supports and promotes court-appointed volunteer advocacy for abused and neglected children so that they can thrive in a safe environment. Southwest Employees consistently seek opportunities to make a positive difference in the communities where they work and live.

ABOUT SOUTHWEST AIRLINES CO.
In its 42nd year of service, Dallas-based Southwest Airlines (NYSE: LUV) continues to differentiate itself from other low-fare carriers by providing a reliable product with exemplary Customer Service.  Including wholly owned subsidiary AirTran Airways, the Company now serves 103 destinations in 41 states, the District of Columbia, the Commonwealth of Puerto Rico, six near-international countries, and employs more than 46,000 People. Visit southwest.com/citizenship to read the Southwest Airlines One Report™ and see how Southwest is doing its part to be a good citizen while underscoring a commitment to the triple bottom line of Performance, People, and Planet.

Southwest Airlines
Southwest Airlines, one of the most honored airlines in the world, is the nation's largest carrier in terms of originating domestic passengers boarded.  Southwest currently operates more than 3,400 flights a day and serves the communities around 74 airports in Southwest’s network of domestic destinations.  To book a flight, visit southwest.com.