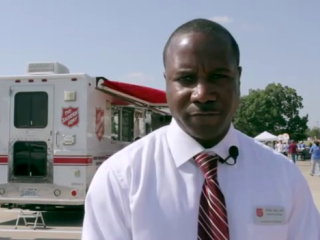 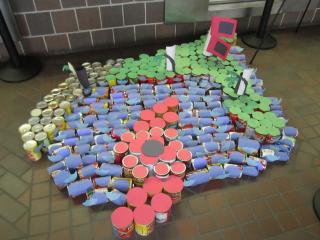 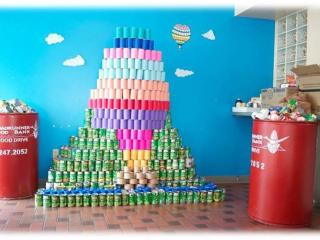 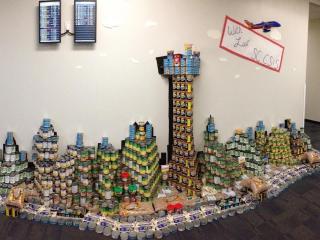 Employees from Southwest Airlines (NYSE: LUV) and its wholly-owned subsidiary AirTran Airways recently helped local communities prepare for disaster by collecting and donating nearly 14,000 pounds of food, which will generate more than 11,000 meals to benefit food banks and other nonprofit charitable organizations across the nation. The giving back didn’t stop there—hundreds of Employees traveled to local food banks to donate the cans collected and volunteered to help sort food, clean, and assist with other needs.  In addition to this donation, Employees created canned food sculptures in nearly 30 Southwest-served airports and competed by location for the chance to win a monetary donation for the local nonprofit organization of their choice.  To read a blog post and view a video of Employees building canned food sculptures, visit the NUTS About Southwest blog.

Here are a few stories where Southwest and AirTran Employees made a positive difference, including the winning location:

In Charleston, South Carolina, Employees rallied together to collect 700 pounds of food for the Low Country Food Bank where they volunteered their time to make a positive difference.  Before donating the cans, Employees created a depiction of the Gulf States to promote hurricane preparedness.

While not on duty delivering our Legendary Customer Service, our San Antonio Customer Support & Services Center collected more than 1,800 pounds of food and delivered the donation to the Randolph Area Christian Assistance Program.  In the name of the Alamo City skyline, Employees built a canned food sculpture of downtown San Antonio.

Southwest Airlines and AirTran Airways are committed to giving back to the communities in which the carrier’s Employees work and live.  In 2011, Southwest Employees volunteered more than 114,000 hours, which is enough time to fly from Baltimore/Washington to Los Angeles 24,516 times.

In its 42nd year of service, Dallas-based Southwest Airlines (NYSE: LUV) continues to differentiate itself from other carriers with exemplary Customer Service delivered by nearly 46,000 Employees to more than 100 million Customers annually.  Southwest is the nation’s largest carrier in terms of originating passengers boarded, and including wholly-owned subsidiary, AirTran Airways, operates the largest fleet of Boeing aircraft in the world to serve 97 destinations in 41 states, the District of Columbia, the Commonwealth of Puerto Rico, and six near-international countries. Southwest is one of the most honored airlines in the world, known for its commitment to the triple bottom line of Performance, People and Planet.  To read about how Southwest is doing its part to be a good corporate citizen, visit southwest.com/citizenship to read the Southwest Airlines One Report™.

From its first flights on June 18, 1971, Southwest Airlines launched an era of unprecedented affordability in air travel quantified by the U.S. Department of Transportation as “The Southwest Effect,” a lowering of fares and increase in passenger traffic wherever the carrier serves.  On every flight, Southwest offers Customers the first two pieces of checked luggage (weight and size limitations apply) and all ticket changes without additional fees. Southwest’s all Boeing fleet consistently offers leather seating and the comfort of full-size cabins, many of which are equipped with satellite-based WiFi connectivity and a new, eco-friendly cabin interior.  With 39 consecutive years of profitability, the People of Southwest operate more than 3,100 flights a day and serve communities around 78 airports in Southwest’s network of domestic destinations.  Southwest Airlines’ frequent flights and low fares are available only at southwest.com.

AirTran Airways, a wholly-owned subsidiary of Southwest Airlines Co., offers coast-to-coast and near-international service with close to 600 flights a day to 54 destinations.  The carrier’s high-quality product includes assigned seating and Business Class. As Southwest continues to integrate AirTran’s People, places, and planes into Southwest Airlines, Customers of both carriers may book flights at airtran.com and exchange earned loyalty points between both AirTran’s A+ Rewards® and Southwest’s Rapid Rewards® for reward travel on either airline.