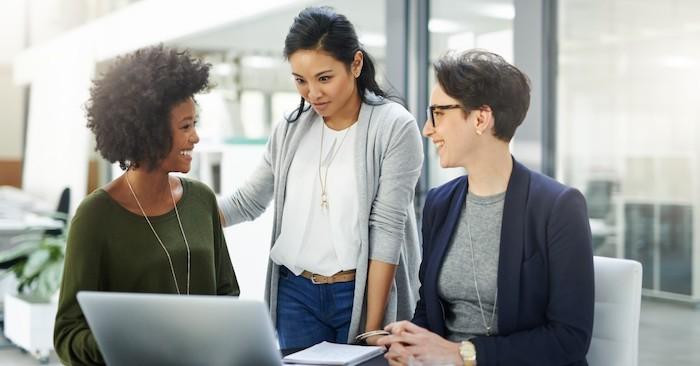 As Canada continues its economic recovery from COVID-19, it is important to support women, who have been disproportionally impacted by the pandemic, as they look to grow, thrive and move past the challenges of the past two years.

The Scotiabank Women Initiative® (SWI) is taking a big step to support women in this recovery. It will deploy $10 billion in capital to women-owned and women-led businesses in Canada, up from its initial $3-billion commitment announced in 2018.

Perspectives spoke with Sloane Muldoon, SWI co-chair and Scotiabank’s Senior Vice President, Retail Performance, about what prompted this increased funding, the importance of fostering a network of support among women entrepreneurs and businesswomen and why she feels it is important to “pay it forward.”

Q: SWI started out with a commitment to deploy $3 billion in capital to women-led and women-owned businesses to help bring down the barriers that women face when seeking funding for their ventures. You just announced that commitment has been upped to $10 billion. What prompted this?

A: We reached that $3-billion mark ahead of our three-year deadline, and we continue to see that there are women entrepreneurs either starting or expanding their business in Canada that need financial support. We see this as an opportunity to increase our commitment to women-led businesses across the country and help them advance. They’re such an essential part of our economy and they are significant employers in our country. And it’s just the right thing to do.

Q: What broader impact do you hope this additional infusion of capital and SWI overall will make? Who do you think this will benefit the most?

A: I hope that we support women right across the country at all stages of their business, whether they’re starting or expanding their businesses. That’s going to contribute to local economies, that’s going to contribute to local employment. And for me, as a senior woman in the organization, it’s an opportunity to pay it forward. To help women who have a passion for entrepreneurship and who, in the past, unfortunately have had difficulty raising capital and getting fair and unbiased access to capital. It’s also been difficult for women in business to connect with one another in an organized fashion because they don’t necessarily have the same time that a male counterpart would have, and they want to connect in different ways. When I attend the Un-Mentorship Boot Camps and the networking sessions, the power is in the connectivity that’s in the room. And some of those connections, we know, have led to relationships and support among women entrepreneurs, and have led to referrals to the Bank for additional business. Many of the customers and us, as the bankers, have stayed in touch. It has helped them to expand their network among like minded women.

Q: A key reason that prompted the launch of SWI was the feedback Gillian Riley, who founded the initiative, received from women commercial banking clients about the obstacles they faced getting capital. What were those challenges, and how has the Bank tried to address them?

A: When Gillian, who is now Tangerine Bank CEO, founded the initiative, she was hearing from women-led ventures of all sizes who were having difficulty acquiring capital and felt like they were not given fair access to capital. Through our research with Dr. Barbara Orser, we realized that there are real unconscious biases related to making financial decisions or capital-lending decisions for women. And that was something that we wanted to, across the organization, attempt to break down. So, we’ve had all of our adjudicators go through unconscious bias training. If it’s a women-led business that’s being declined we have a second set of eyes take a look at the request, just to make sure that we’re making the right business decision and also making it a comfortable experience for women to approach us for capital. We know that a lot of women entrepreneurs prefer to borrow from friends or family as opposed to through a financial institution and we want to change that experience.

Q: How have those challenges that women face evolved over the past three years?

A: The pandemic really created different challenges for women entrepreneurs. Many, as you know, are juggling a work-life-home balance and during the pandemic, whether it was aging parents or children, often the bulk of the workload fell on women. As well, many had to transform their business and take it online or digitize it very quickly. They were looking for support, so that’s how the SWI Digital Hub came to be. Meanwhile, some of the industries where typically more women are represented, such as hospitality, travel, or personal services, were hit harder than other industries. Women entrepreneurs really needed support during the pandemic.

Q: What do you think has been the biggest impact the Scotiabank Women Initiative has made thus far?

A: There’s been a number of key accomplishments. To date we’ve deployed more than $4 billion in capital, we’ve collaborated with more than 15 organizations, such as the StrikeUp Conference for women entrepreneurs, and expanded SWI beyond Canada to help women-led and women-owned businesses in Jamaica and Costa Rica. I find that super exciting. We’ve partnered with The Forum for the Scotiabank Women Initiative Mentor Program, which is the largest mentorship program for women entrepreneurs in the country. We launched the Scotiabank Women Initiative Digital Hub during the pandemic with partners such as Shopify, Pinterest, LinkedIn, and Facebook to help women entrepreneurs face those uncertain times. And recently in Quebec, we launched Women in Auto Accelerator, a mentoring and networking accelerator program for women in the province’s automotive industry. But the biggest impact, I think, is that we’ve engaged more than 13,000 women entrepreneurs coast to coast and that our advisors and our commercial relationship managers have embraced this program. It’s been a real grassroots-led initiative. I think that’s one of the keys to the success of the program.

Q: What do you think needs to be done to support women in the economic recovery, what some call a Shecovery, as we transition out of the pandemic?

A: We need to continue to address those unique and disproportionate economic barriers that women face. Whether you’re an entrepreneur or someone returning to the workforce, we need to make sure that we have all of the support systems available to them to confidently reopen their business and or return to work. And in organizations such as Scotiabank, we need to support women with the type of flexibility they’re looking for as they return to the workforce. Also, we need to make sure that we continue to have inclusive hiring practices and diverse hiring panels. We’re really making an effort to focus on diversity, equity and inclusion overall, but specifically gender imbalances.

Q: Why is it important to you, personally, to be in this role with SWI? What resonates with you the most?

A: For most of my career, I have been customer facing and I love to interact with customers and prospective customers alike. I feel like I have an opportunity to help customers right across the country, realize their financial dreams and their entrepreneurial dreams. What I really like about the Scotiabank Women Initiative, as I mentioned before, is the grassroots energy that we feel coast to coast with our advisors and our relationship managers. Particularly when a customer shares their personal story of how we, as an organization, made a difference in their life and with their business. It’s so rewarding. At a recent event at the Toronto Board of Trade, a woman shared with me some difficult challenges she was going through with her business, having to run it on her own as a single mom. When she said that Scotiabank was the only bank that would take a chance on her, you know, that was really heartwarming. That’s why we do what we do.

Q: What do you hope SWI will be able to accomplish in the coming years?

A: I’m really proud of how we also have the Scotiabank Women Initiative in our Global Wealth Management business line and in Global Banking and Markets, as well as in our International Banking footprint. I think that’s amazing. Erin Griffiths along with Anya Schnoor and their respective teams are doing a great job leading that initiative in GWM, and IB. Loretta Marcoccia and Michelle Khalili have done an amazing job of preparing some senior women for potential board roles through some educational programs. I’m really proud of how the entire Bank has rallied around this initiative. We want to continue to grow. We want to make sure that we become the go-to bank for women and help make a difference.