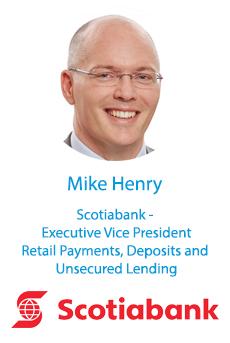 Mike Henry is Executive Vice President, Retail Payments, Deposits and Unsecured Lending. Mike and his team are responsible for designing and delivering financial solutions that drive growth through Scotiabank’s Canadian branch network, call centres and digital channels. Mike is also the co-executive champion of HeForShe at Scotiabank. HeForShe at Scotiabank builds on the HeForShe movement created by UN Women and is part of a global effort to engage men in removing the social and cultural barriers that prevent women from achieving their potential.

Mike holds a Bachelor of Arts degree from the University of Toronto and a Master of Business Administration from the Schulich School of Business.

Mike has served on the Board of Directors for several Scotiabank subsidiaries, is on Visa Canada’s Advisory Board, is on the Board of SCENE LP, has chaired several senior industry committees at the Canadian Bankers Association, and is active in the community supporting not for profit organizations in advisory or board roles.

Mike and his wife Tracey have three children.