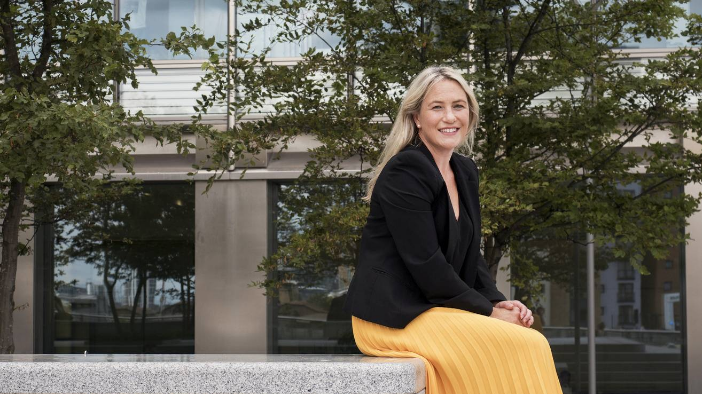 Before joining Barclays, Jo Aitken ran a sports organisation developing ambitious legacy initiatives in east London connected to the 2012 Olympics. In 2015, she took a year out to have a baby. One year turned into three, but Barclays’ Encore! programme – which helps people who have taken a career break to re-enter the workforce – allowed Jo to transition into a dynamic new role, as a Corporate Banking Relationship Director in Technology, Media and Telecoms. She tells us why the programme works.

In many ways, Jo Aitken’s current position at Barclays is a world away from anything she has done before. But it’s clear that her talent for relationship development – which became apparent 12 years ago when she first nurtured client relationships at public body Sport England – is stronger than ever.

During Jo’s three-year career break, she raised her young son, project managed a house renovation and coached friends on their own careers. Jo also maintained a non-executive role as an independent trustee to the London Youth Games Foundation, keeping her experiences fresh and her contacts relevant.

Aware that her perspective on life had shifted during her time away, Jo identified the aspects of her previous jobs she had most relished – strategy, carving out business development opportunities, relationship building and management – and began to think about how she could transfer those skills to another sector.

“Trying to pinpoint which direction to head in was a bit like looking for a needle in a haystack,” says Jo. But then a friend, already working at Barclays, sent her an email about its Encore! programme. One of the bank’s flagship diversity and citizenship programmes, Encore! is specifically aimed at professionals wishing to return to a fulfilling role in the workplace after a career break and is designed to help returnees move forward with confidence. The only stipulation is that applicants must have been out of paid employment for 12 months.

“I had looked at various other returnship programmes in the financial sector but most required previous financial services experience. This programme actually valued diversity of experience and perspective over knowledge of the banking sector, which impressed me,” says Jo. Applicants to the Encore! programme can apply for a number of positions, which are paid for its 10-week duration, after which many are offered a permanent role at Barclays. In addition, it offers participants the opportunity to refresh their skills through leadership and development training, as well as mentorship and networking opportunities.

Jo applied for a London-based relationship role with Barclays Corporate and was delighted to be accepted onto the programme. “There is no doubt that when you take a career break to have a child you lose your confidence about certain things,” she says. “So I was very excited to be part of it.”

Her fellow Encore! participants were a mix of ages and genders, with a wide range of confidence levels. Jo found that the mentorship offered by the scheme’s team of senior managers ensured every individual was nurtured and supported.

Jo’s manager, Lorraine Ruckstuhl, appreciated the fact that she had run an organisation in contrast to rising through a banking graduate training scheme. She could also see that Jo had been in relationship roles before and had dealt with high level executives on a regular basis.

Having successfully completed the programme, Jo is now seven months into her new job as a Corporate Banking Relationship Director in Technology, Media and Telecoms – and loving it. She and her team work with a diverse range of clients, from film production companies to tech start-ups, supporting them in their banking and finance needs and becoming a trusted ally. Jo is in her element, meeting new people on a daily basis and getting to grips with how they function as individuals, how their businesses work and what their strategies are.

“The really lovely thing about a relationship role is that every day poses a new challenge, depending on what your client throws at you,” says Jo. “In my last role, I was expected to know how to do everything already, so the thrill of learning something new was much less frequent. Because this role is entirely new to me, there are lots of thrilling moments.”

Would Jo have changed her career path had she not taken a break and become involved in the Encore! programme? “Possibly, but much more slowly,” she says. “Will I get back to the same level I was previously on the career ladder? I don’t know. But getting to spend those first three years with my son more than makes up for that. It’s just great to feel independent again.”

Barclays in the News: Changing the World