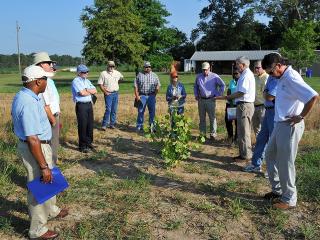 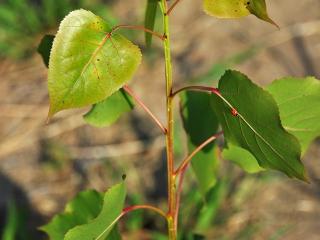 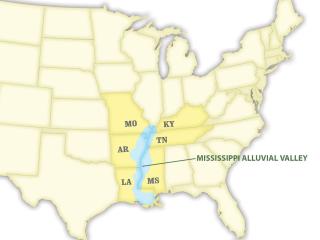 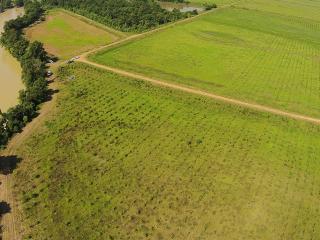 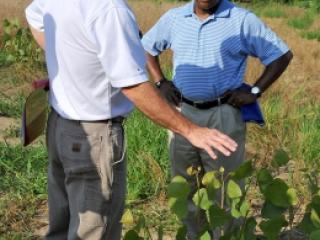 “The plantings were at a point where it was worthwhile to go down and gauge the progress,” Moorman said of his summer trip to three privately owned Mississippi properties. “We walked away with the feeling that our money is being well spent, and it’s an extraordinary project to be part of.”

These properties are part of former woodlands spanning four states in the Mississippi Alluvial Valley that NS is helping to reforest through a partnership with GreenTrees, the country’s top reforestation and carbon capture program.

This winter, GreenTrees will begin its fourth planting season as part of a five-year collaboration with NS to restore 6.04 million native cottonwood and hardwood trees in an ecologically important region the railroad has long served. To date, nearly 70 percent of NS’ trees have been planted. Most, if not all, of the remainder are expected to go in the ground during the 2014-15 planting season – a year ahead of schedule. NS will evaluate whether to make additional investments as GreenTrees secures property rights from additional landowners.

To recoup its GreenTrees investment, NS can sell the carbon credits in the voluntary U.S. carbon-offset market. The credits are verified and registered by the nonprofit American Carbon Registry, and the first 10,000 tons of carbon credits from Trees and Trains were transferred into NS’ account earlier this year.

“It’s a great investment for us both in terms of improving our sustainability profile and in receiving carbon credits as the trees are planted and mature,” Moorman said. “When you think about sustainability as a company, there are two sides of that coin. You do everything you can to reduce your own footprint in terms of waste of all kinds. At the same time, it’s important that you step outside the company to support worthwhile initiatives in the broader community.”

“We wanted to get a representative sense of what the growth pattern is over a period of years,” Wimbush said, noting that fast growing cottonwoods act as “nurse trees” for the slower growing hardwoods by shading and sheltering them as they get established. The trees were in various stages of growth, ranging from 2 to 26 months. The 2-month-old cottonwoods were waist high, while the more durable hardwoods were a foot to 18 inches tall. The 26-month-old cottonwoods had reached 8 to 9 feet tall, while the hardwoods were between knee and waist high.

The NS group also met with members of wildlife organizations, including specialists in bears and migratory neotropical birds. Wildlife numbers declined as forests throughout the Delta region were cleared for agriculture, but as the forests are restored, birds, deer, bears, and other animals are expected to return.

“Trees and Trains is not just about carbon mitigation. It’s also about rebuilding forest habitat,” Wimbush said. “You need trees that produce food for birds as they head north and south, and other animals depend on the forest for cover and sustenance.”

GreenTrees’ goal is to reforest 1 million acres in the Mississippi Alluvial Valley, the United States’ largest watershed and known as North America’s Amazon. Only about 4 million acres of the Delta’s original 25 million acres of woodlands remain, with the rest converted to development and agricultural production. Much of the farmland is now either underused or marginally productive.

NS is GreenTrees’ largest corporate partner. In addition to environmental benefits, NS’ Trees and Trains project provides economic benefits to landowners who can leverage tax credits, conservation grants, and lease payments when they commit their property to GreenTrees. Support from NS and other corporate partners gives GreenTrees added traction in the community, Wimbush said.

“Getting enough people into the process is a great motivator,” he said. “Owners see the results from other farms, and that leads to a surge in willing participants.”

Landowners can generate additional income by harvesting and selling some of the cottonwoods for lumber at 10, 15, and 25 years, a thinning process that creates additional light and space for the hardwoods’ long-term health.

“The real value of a reforestation project like this is in the breadth of its ecological and economic impact,” Wimbush said. “It is an economic project that also has water quality, habitation, and land conservation benefits.”

In short, Trees and Trains represents for NS an ideal combination of conservation and capitalism, he said.

“What we have learned from the GreenTrees model for reforestation is that scale matters in a way that transcends a more limited program,” Wimbush said. “Instead of planting 100 trees here or there, we’re responsible for planting 6 million trees on 10,000 acres in a related ecosystem. We’re creating something of tremendous ecological and economic value.”

GreenTrees developed the Advanced Carbon Restructured Ecosystem program to measure the economic benefits associated with the conservation of an acre of land. Using U.S. Forest Service calculations of the ecological value of a single tree, GreenTrees estimates that the NS trees will generate almost $1 trillion in benefits over 50 years, including  monetary values assigned to the trees’ abilities to release oxygen, absorb CO2, reduce soil erosion, and recycle water.

As NS’ initial commitment with GreenTrees winds down over the next two years, the railroad plans to evaluate future investments while seeking additional ways to enhance its sustainability profile. Through the Norfolk Southern Foundation, the company supports a variety of conservation projects, including those with The Nature Conservancy, the Elizabeth River Project, The American Chestnut Foundation, and The Longleaf Alliance, Inc.

In addition, NS has developed substantial cachet among the environmental community through its conservation efforts of longleaf pines and endangered red-cockaded woodpeckers at the railroad’s Brosnan Forest corporate retreat near Charleston, S.C. In 2008, NS permanently protected most of the property from development through donation of a conservation easement to the Lowcountry Open Land Trust.

Earlier this year, NS received about 225,000 carbon credits for its Brosnan Forest Improved Forest Management program. Proceeds from selling the credits could be used to further enhance management of wildlife and forestry resources at the Forest.

“Part of our sustainability strategy is to encourage activities that mitigate carbon emissions through reforestation, while also taking steps to reduce our energy consumption and greenhouse gas emissions,” Wimbush said. “It’s important for a company of Norfolk Southern’s stature to go beyond what might be required and ordinarily expected.”