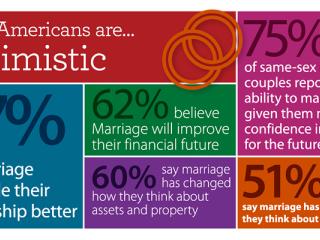 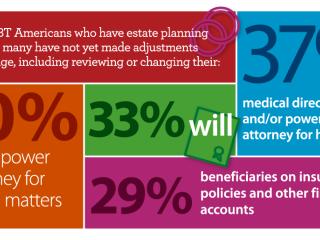 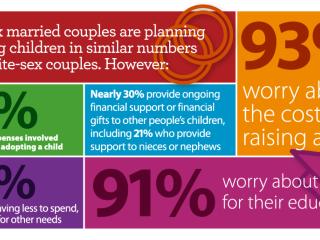 SAN FRANCISCO, July 12, 2016 /3BL Media/ – One year after the federal ruling in favor of marriage equality, same-sex couples report experiencing a positive shift in their overall quality of life. According to a new survey from Wells Fargo & Company (NYSE: WFC) of Lesbian, Gay, Bisexual and Transgender (LGBT) Americans, 75% feel marriage makes them more confident in planning for their future. More than half surveyed (67%) say marriage made their relationship better, and 62% believe it will improve their financial future.

“It’s important for us to really get to know and understand our customers,” said John Lake, LGBT Segment leader, Wells Fargo. ‘This survey allows us access to insights regarding the thoughts, attitudes and behaviors of the LGBT community, creating an opportunity to better inform how we provide tailored products, programs, services and solutions.”

For the third consecutive year, Wells Fargo took an intimate look at LGBT Americans to explore how they think about money. The survey helped demonstrate that they are focusing more seriously on the rights and benefits of marriage (71%) –including how marriage affects finances (54%). While there is a great level of optimism among the community, just one third of those surveyed (32%) report having a full understanding of financial benefits or potential downsides of marriage.

As LGBT Americans plan for their future, they are also considering having children.  Yet, they are carefully weighing the financial implications.

Many Americans in same-sex marriages express a desire to have children. Almost one in five (17%) are planning to have children, including 47% of married millennials. However, finances are a very realistic concern for most:

As for how they will pay for the medical and legal costs associated with conceiving or adopting a child, an overwhelming majority (86%) plan to rely on their own savings.

Getting the house in order

Most same-sex couples say marriage equality has influenced how they think about their finances, including assets and property (60%). Though most are excited about their financial future, 31% admit that sharing money with a spouse is honestly, scary. Furthermore, a majority still maintain at least some of their assets separately, including:

Eighty-one percent of couples reported filing jointly on their most recent tax returns. That said, fewer than half (45%) of participants surveyed are okay with paying a “marriage penalty” (higher-taxes) for the right to file taxes jointly. This is down sharply from last year –before nationwide recognition of same-sex marriages – when nearly two-thirds (62%) felt okay about it.

When it comes to estate planning, more than one in four (29%) married couples have not yet reviewed or changed named beneficiaries on insurance policies and other financial accounts, and many have yet to make adjustments to their:

Although financial considerations like estate planning and filing taxes are relatively consistent for most married couples, certain factors are unique for LGBT Americans.  For instance, on average same-sex married couples report living together in marriage-like relationships for 12 years before getting married. Couples who are “newlyweds” after 12 years together may have much different financial needs than younger newlyweds with fewer assets.

“The concerns facing same-sex couples related to merging finances is not at all uncommon,” said Lake. “LGBT Americans recognize that access to marriage provides certain financial benefits and obligations, still, there is some anxiety around specific issues. This signals a real need, and desire, for more education. Wells Fargo has the opportunity to provide financial guidance and assist the community in making sound financial decisions.”

About the Survey
Versta Research conducted an online national survey for Wells Fargo among 1,132 LGBT (Lesbian, Gay, Bisexual, or Transgender) Americans between April 13 and April 27, 2016. Qualified respondents were non-students, ages 25–75, who are the primary or joint financial decision-maker in the household. The sample included 530 who are in same-sex marriages, with data weighted to reflect the overall LGBT population in the U.S. based on LGBT status and same-sex relationship status. The survey also included a similar national comparison sample of 365 Americans, weighted to reflect current Census data for gender, age, race, ethnicity, household income, and region. Assuming no sample bias, the maximum margin of error is ±3% for the full LGBT sample and ±5% for the full U.S. sample.*

About Wells Fargo
Wells Fargo & Company (NYSE: WFC) is a diversified, community-based financial services company with $1.8 trillion in assets. Founded in 1852 and headquartered in San Francisco, Wells Fargo provides banking, insurance, investments, mortgage, and consumer and commercial finance through 8,800 locations, 13,000 ATMs, the internet (wellsfargo.com) and mobile banking, and has offices in 36 countries to support customers who conduct business in the global economy. With approximately 269,000 team members, Wells Fargo serves one in three households in the United States. Wells Fargo & Company was ranked No. 27 on Fortune’s 2016 rankings of America’s largest corporations. Wells Fargo’s vision is to satisfy our customers’ financial needs and help them succeed financially. Wells Fargo perspectives are also available at Wells Fargo Blogs and Wells Fargo Stories.