How I became a techie: Susie Armstrong 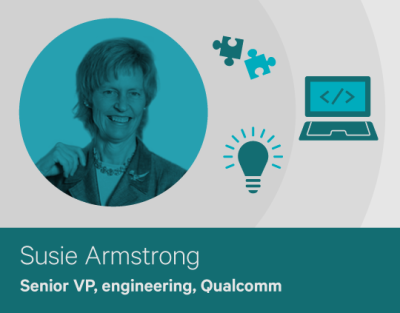 How I became a techie | Tumblr

"You can make a living out of having fun." -Susie Armstrong

In high school, I did very well in math and science. And I was going to become a veterinarian. I liked animals. I liked the science behind it. But after touring the Primate Research Center at UC Davis, I realized that I probably couldn't deal with the pain and suffering of any sort of medical field.

So I went to college, and I took my first programming class. And it was a puzzle. And it was really fun. And that was kind of the "aha" moment where I said, oh, this is a path that is very interesting. And then later I realized, oh, I could actually make a living out of this.

When I graduated from Cal Poly San Luis Obispo I actually had eight job offers, eight very good job offers. And so that really did verify that yes, you can make a living out of having fun. Out of programming.

Susie Armstrong is senior vice president, engineering, at Qualcomm. She was a pioneer in bringing internet protocols to the cellular industry, resulting in the first web surfing on a cellular phone in 1997, and Qualcomm's commercialization of packet data in 1998. And her mother is very proud!

How Virtual Reality for Teachers Can Improve Quality of Education

Why We Need To Prioritize Digital Transformation – Even in a Downturn