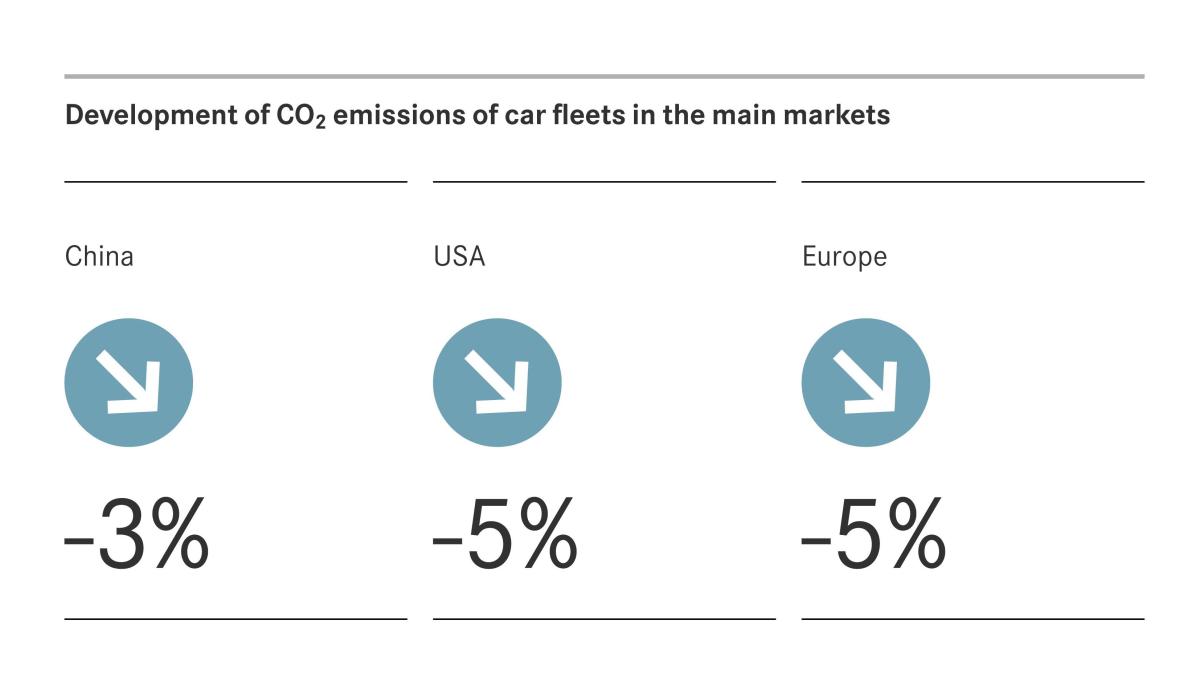 The largest share of primary energy consumption and CO2 emissions over the life cycle of a vehicle is attributable to the usage phase. In the case of a car with a combustion engine it is about 80 percent. The remaining 20 percent is consumed almost entirely during the manufacturing process. Vehicles with alternative drive systems have lower CO2 emissions during the usage phase. However, the primary energy consumption of these vehicles generally increases during production because of the energy needed to manufacture certain components such as batteries, electric motors, and electronic control systems. In the reporting year, the average CO2 emissions of the total fleet of Mercedes-Benz Cars in Europe amounted to 123 grams per kilometer. We have thus achieved a reduction by more than 20 percent in the last five years. In 2015, we achieved a reduction of 4 percent. We have thus already achieved our target of lowering the CO2 emissions of our new vehicle fleet in Europe to 125 grams per kilometer by the year 2016. In consideration of the expected average vehicle weight, we have now set a new target of 100 grams of CO2 per kilometer within the framework of our target program for 2021.

Fleet values in the US
In the US, fleet values are regulated by two co-regulating standards for the reduction of greenhouse gases in vehicle fleets: the Greenhouse Gas Standards (GHG) and the Corporate Average Fuel Economy Standards (CAFE). Separate target values are set for cars and light trucks for each manufacturer. If a manufacturer does not meet the GHG standards, the Environmental Protection Agency (EPA) identifies the vehicles from the manufacturer’s fleet to which the overrun of the limit is attributable. A penalty payment is then imposed on all affected models. The CAFE fleet value for each model year is determined on the basis of the number of vehicles sold and their respective fuel economy figures. For every 0.1 mile per gallon below the specified limit, the manufacturer is required to pay a fine to the government of US$5.50 per vehicle produced for sale in the United States. The CAFE fleet figures for Daimler vehicles in the United States have improved by 23.7 percent for cars and 20.6 percent for light commercial vehicles over the last five years. Our target is to reduce the fleet consumption of our cars and light-duty trucks on the US market by 25 percent by 2019 as compared to 2012, which is the base year for the currently valid CAFE regulations.

Fleet values in China
In China, domestically produced and imported cars are assessed differently. A differentiation is also made between sixteen weight classes. The fleet fuel economy target relative to the weight of Daimler’s “domestic” fleet was 9.3 liters/100 km, and the actual value achieved in 2015 was 7.5 liters/100 km. The target for imported vehicles was 9.6 liters/100 km, and 8.3 liters/100 km was achieved. We have set ourselves the target of reducing the fleet consumption of our cars in China by 25 percent in the period from 2012 (the base year of the current fuel economy regulations) to 2019. Our achievements thus far have put us on the right track. In 2015, the European Commission declared the LED technology Daimler developed for side lights, high-beams, and low-beams, as well as for license plate illumination to be an environmental innovation. The Commission issued a certificate confirming that this energy-efficient technology reduces emissions by at least 1 gram of CO2 per kilometer.

Daimler Sustainability Strategy Takes the Expectations of Stakeholders into Account