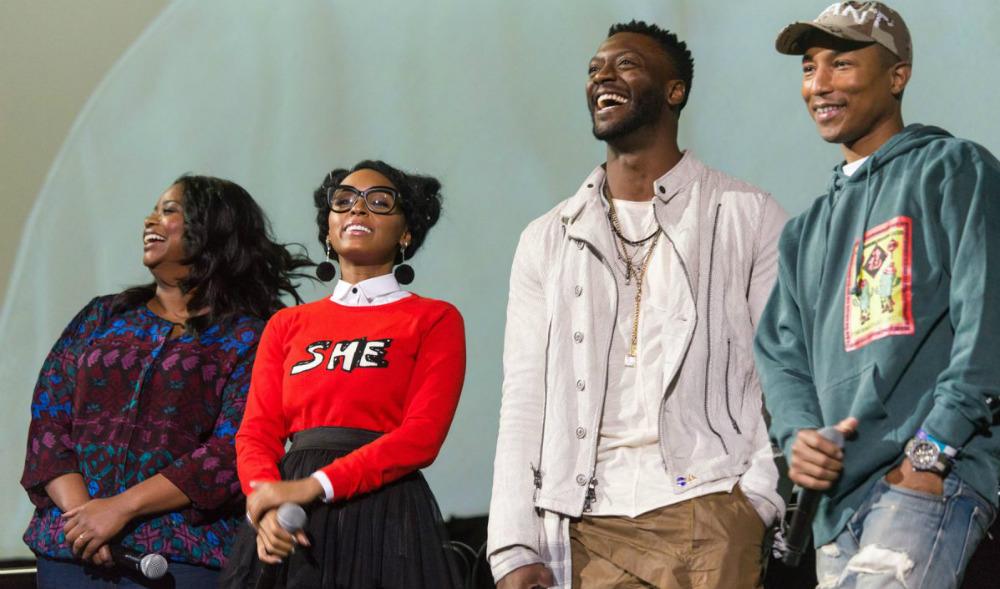 Nearly 10,000 young women from middle and high schools across Los Angeles County gathered at the University of Southern California’s Galen Center on January 10 for an exclusive screening of Hidden Figures, the hit film from 20th Century Fox that tells the true story of three female African American mathematicians who played crucial roles in the Space Race of the 1960’s. The LA Promise Fund for Public Schools organized the screening, which featured appearances by cast members Octavia Spencer, Janelle Monáe and Aldis Hodge, along with producer Pharrell Williams, all of whom spoke about their hope that the Hidden Figures story will inspire more women and women of color to pursue careers in science, technology, engineering and math.

“When I first heard what the story was about, which is three African American women who help get our first man into space, I thought it was fiction,” Spencer said during a Q&A with the cast. “When I realized they were real women who made real contributions, which we are still feeling the effects of today, I wanted to be a part of telling their stories so that we will never have people not getting the recognition that they so richly deserve… You are the master of your fate. Remember that.”

The LA Promise Fund invited female students from more than 100 public schools to the screening as part of its Girls Build LA initiative, which challenges young women from across LA County to use STEAM (science, technology, engineering, arts and math) principles to effect social change. The event featured a full day of speakers and presentations, including from Diana Trujillo, a Hispanic-American immigrant from Colombia who now works for NASA as the Activity Lead for the Mars Curiosity Rover, and Dr. Knatokie Ford, Senior Policy Advisor at the White House Office of Science & Technology Policy, who emceed the program.

“Take a look around. You all represent the depth and the diversity of LA County, and I am so very inspired to look at all your beautiful faces and all this amazing potential that you represent,” Ford said. “I hope that you will not only be entertained by this amazing film you’re about to see, but I also want you to be encouraged, and I want you to be inspired to think that you can do it too.”

21st Century Fox previously partnered with the LA Promise Fund in September 2015 for the West Coast premiere of He Named Me Malala, the documentary about the life of international girls’ education activist and Nobel Peace Prize Laureate, Malala Yousafzai. The event brought together nearly 7,000 girls from middle and high schools in the Los Angeles Unified School District and featured a special video appearance by First Lady Michelle Obama. Following the screening, students were treated to a festival on the L.A. Live Plaza, where 21CF organized a selfie campaign, encouraging girls to make a pledge to #StandWithMalala and take action in their schools and communities.