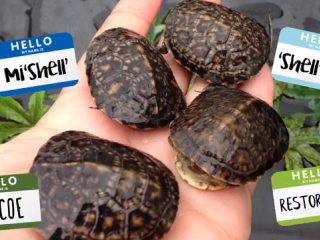 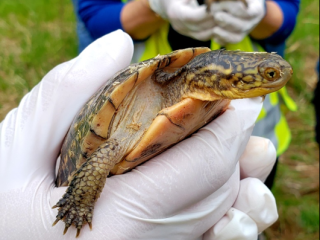 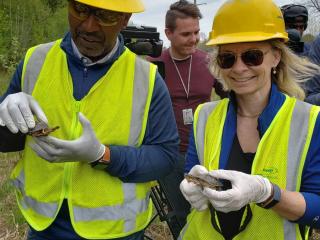 SAGINAW, MI, May 16, 2019 – Twelve rare juvenile Blanding’s Turtles hatched from incubated eggs were released today back into a turtle-friendly habitat created for them near Saginaw by Consumers Energy employees.

The eggs, two adults and a juvenile Blanding’s Turtle were rescued in 2018 from along the path of Consumers Energy’s Saginaw Trail Pipeline. The adults were moved to a safe location, where they laid 12 eggs that were incubated, hatched and raised by the company’s contract herpetologist over the winter. The juveniles are now large enough to be released.

“At Consumers Energy we demonstrate our guiding principle of ‘leaving it better than we find it’ every day. The Saginaw Trail Pipeline project and the rescue of these rare turtles reaffirm our commitment to preserving Michigan’s environment as we modernize our gas infrastructure,” said Charles Crews, Consumers Energy’s vice president of gas operations.

“Not only do we seek out endangered reptiles like the Blanding’s Turtle, we have safely relocated thousands of frogs, salamanders, snakes and turtles from the pipeline path and protected, enhanced, or restored more than 750 acres of land across the state last year alone,” he added.

The Blanding’s Turtle is listed as a Species of Special Concern and is protected by the Michigan Department of Natural Resources. It is protected across the species range and is currently being considered for federal protection.

While it has a lifespan of over 80 years, the Blanding’s Turtle does not reach sexual maturity until about 20. Hatchling and juvenile turtles suffer very high mortality rates from predators, particularly raccoons. It may take one adult female decades to produce enough turtles to help keep the population stable.

The turtles prefer shrub swamp wetland and open water areas with logs and stumps to bask, so Consumers Energy enhanced the area near where the females were found to give the juvenile turtles a better chance of survival. Felled trees that were removed to safely install the pipeline were strategically placed to create basking/hiding areas.

For more information about Consumers Energy, go to www.ConsumersEnergy.com.