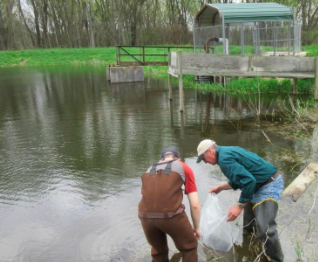 A volunteer and an MDNR official release walleye fry into the Muskegon River Walleye Pond. About 300,000 more walleye will be available annually for anglers thanks to upgrades there funded by Consumers Energy.

A multi-year $140,607 grant from the Habitat Improvement Account (HIA) has been used to install a permanent power source and provide three new pumps at the pond where walleye fingerlings are reared for stocking in the Muskegon River and other Michigan waters.

“It’s exciting to see how these funds are applied and to know they help increase recreational opportunities and enrich outdoor experiences for Michigan residents and visitors,” said William Schoenlein, Consumers Energy’s manager of hydro and renewable generation.

Having a permanent electricity source and reliable pumps will allow precise, automatic water level control at the 15-acre pond located in the Muskegon State Game Area. A high water level is optimum during the rearing period for the health of the young walleye. Keeping the water level low during the non-rearing period helps control vegetation and unintended species such as crayfish and frogs from taking up residence which reduces the number of walleye fry that can grow in the pond.

Also as a result of the project, MDNR personnel will save traveling from Plainwell, Mich. offices to fuel the World War II vintage diesel generator and keep the pumps running.

The MDNR estimates the upgrades will increase walleye fingerling production by 300,000 and save 108 hours of labor costs per year.

“These upgrades are a real boom to Michigan anglers, as they will help make more walleye available for stocking,” said Ed Pearce, fisheries technician supervisor with the MDNR. “As a bonus, the work will result in significant savings in our costs to operate the Muskegon River Walleye Pond.”

Historically, the number of walleye reared has varied based on the amount of maintenance performed at the Muskegon River Walleye Pond. The number of walleye fingerlings reared there dropped from an average of 700,000 per year from 1997- 2001 to a low of 124,800 in 2014, due to reduced staffing and mechanical issues with the pump system.

Crews installed a mile of electric lines underground to the Muskegon River Walleye Pond in November, 2018. The new pumps are expected to be installed and controlling water levels at the pond this summer.

Consumers Energy funds the HIA, which is administered by the MDNR, as part of its license agreement with the Federal Energy Regulatory Commission to operate its 11 hydro generating facilities on the Au Sable, Manistee and Muskegon rivers. When deciding which initiatives receive funding from the HIA, a MDNR fisheries management team reviews project proposals to determine the positive impact a project may produce.

Since being implemented into the hydro project licenses in 1994, Consumers Energy has contributed more than $9 million to the account.

Three other projects totaling $421,019 were funded this year through the program for fisheries research, habitat improvement and stream restoration:

A Better Way for Michigan