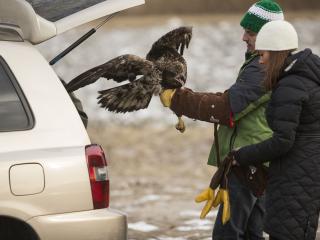 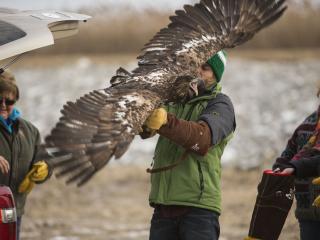 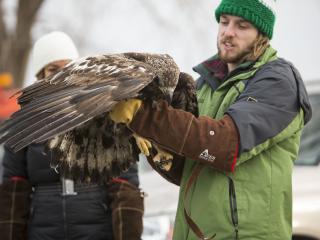 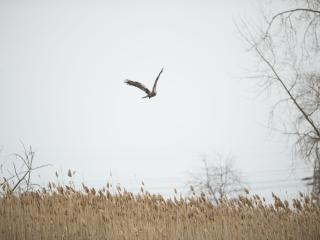 ESSEXVILLE, Mich., February 15, 2017 /3BL Media/ – Consumers Energy employees at the company’s Karn Weadock generating complex Friday celebrated the successful release back to the wild of a juvenile bald eagle nursed back to health after it nearly died from lead poisoning.

“Consumers Energy takes its commitment to sustainability and the environment very seriously. It is a privilege to be able to be part of an event where an eagle, the symbol of our national emblem, is being released back into the wild where it will hopefully continue to thrive,” said John Broschak, vice president of generation operations.

“I want to commend Consumers Energy for recognizing the importance of being good stewards of the environment, and for providing this important rehabilitation resource at the Karn generating plant for nearly 25 years,” said Sandy Miner of the Wildlife Support Team.

Miner said the flight pen is the largest of its kind in the state and is an ideal location because it is a restricted area where birds of prey can recover without a lot of human exposure. The warmer water surrounding the plant also creates a perfect environment for them to hone their hunting skills because fish and other prey are plentiful as are nesting areas. In the case of eagles, at this time of year Miner said the approximately year-old bird will certainly be welcomed by more mature eagles who will help it learn how to survive as well as socialize with others of its kind.

The eagle had been at the raptor rehabilitation pen on plant grounds for about two weeks being conditioned and cared for by the Wildlife Support Team before its release. It was found near-death in Gladwin County, suffering from lead poisoning after feeding on a deer kill that contained lead shot.

Dr. James Sikarskie, a wildlife rehabilitation specialist and associate professor with the Michigan State University College of Veterinary Medicine, and several veterinary students took on the challenge of saving the juvenile eagle, which was extremely lethargic and not eating upon arrival to MSU.

It took three chelation treatments, during which a substance is injected into the bloodstream to help cleanse it of heavy metals like lead, before the bird began to eat and show interest in its surroundings. Lead shot was also removed from the eagle using an endoscope.

For more information about Consumers Energy, go to www.ConsumersEnergy.com