Bacardi Gets Into The Spirit of Recycling Demolition Waste 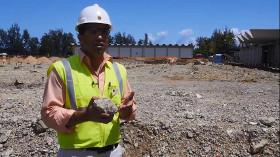 Spirits manufacturer, Bacardi has achieved zero waste to landfill on works to demolish six buildings at its rum distillery in Cataño, Puerto Rico, where it recycled 2300 tonnes of rubble as well as all of the steel from the buildings.

The company explained that it has constructed three new aging warehouses at the site, which it said is the world’s largest premium rum distillery, using tonnes of recycled concrete.

According to Bacardi it made both environmental and cost savings by recycling 150 truckloads of concrete as backfill in the ground works of the new structures.

“We took all the rubble from the demolition and reused it as backfill material in building our new warehouses,” says Julio Torruella, project director for Bacardi in Puerto Rico.

“This was a zero- waste project designed to reuse steel and concrete, rather than sending material to the landfill,” he added.

The company added that this not only eliminated landfill waste, but also reduced the need to buy new materials for the buildings.

As part of its ‘Good Spirited’ sustainability program, Bacardi said that it aims to eliminate landfill waste at all of its production sites by 2022.