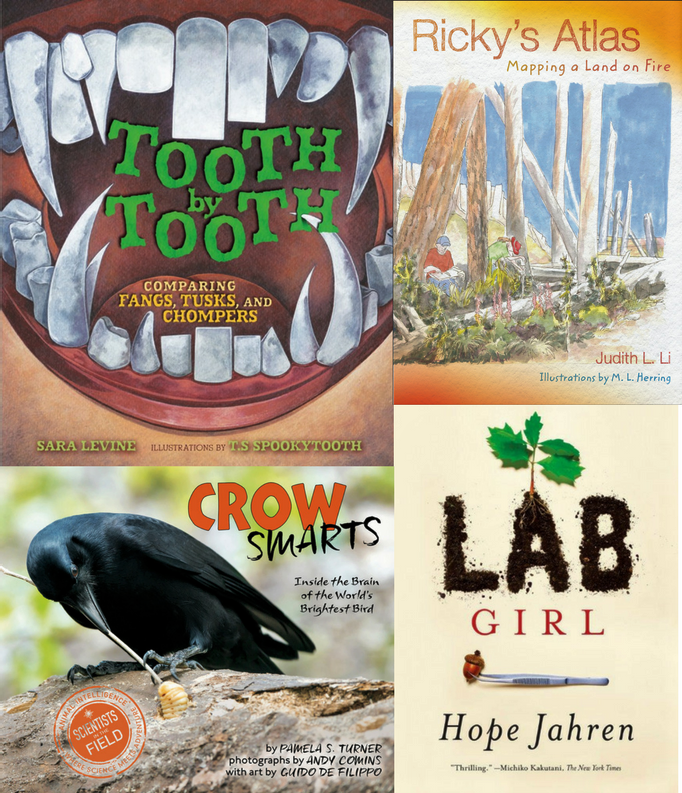 CHERRY HILL, NJ, February 1, 2017 /3BL Media/ - Readers will learn how to match a tooth to the correct mammal, discover the intelligence of crows, deepen their passion for plants and gain insights into wildfire-prone terrain just by picking up any of the winners of this year’s American Association for the Advancement of Science (AAAS)/Subaru Science Books & Film Prizes for Excellence in Science Books.

“Children can be seized by the excitement, power and beauty of science and the admirable people who do it. And they can develop a lifelong reverence for evidence that will serve them well, whether or not they become professional scientists,” said Rush Holt, AAAS CEO and executive publisher of the Science family of journals, in lauding the award program.

Through a variety of subjects, the winning books demonstrate examples of outstanding science writing and illustration. AAAS and Subaru of America, Inc. co-sponsor the prizes to recognize recently published works that are drawn from and inspired by sound science.

The award program, now in its 12th year, seeks to encourage the writing and publishing of high-quality science books that engage readers across all age groups and leave readers with a richer understanding of all corners of science.

Sara Levine, author of Tooth by Tooth: Comparing Fangs, Tusks, and Chompers, a children’s picture book that won the author and illustration prizes, captured the mission of the award, writing in a blog post: “In the lab, once students learn to differentiate types of teeth, they can identify them on individual skulls and use this to determine the animals’ feeding patterns. And, then, for fun, they can guess what kind of animals the skulls come from.”

The AAAS/Subaru SB&F Prizes for Excellence in Science Books will be presented during an event on 18 February at the 2017 AAAS Annual Meeting in Boston that begins on 16 February.

“For students of all levels, it remains vitally important to encourage both discovery and innovation in science amongst the leaders of tomorrow,” said Thomas J. Doll, president and chief operating officer, Subaru of America Inc. “Through the Subaru Loves Learning platform and our partnership with AAAS, Subaru continues its support for science education by helping recognize some of the most influential and informative works of the year.”

Amazing and bold illustrations like a floret of broccoli wedged between two molars and make this book a visual and verbal standout. The book is written in engaging terms that spark the imagination. Together, the appealing drawings and text convey lots of accurate information. Young readers learn how to differentiate teeth among mammalian carnivores, herbivores and omnivores. They are shown that humans share similar types of teeth. They are walked through the purpose of specialized teeth like tusks and can visualize the scale of an elephant’s tusk that is accented by a compact, red backpack. In the explanation of the absence of teeth in some mammals, readers are treated to an illustration of ants perched on an anteater’s tongue. Sketches of skulls successfully balance the study of natural history. The book’s accessibility is vital to readers just gaining scientific literacy. The book includes a useful glossary and suggestions for further reading. Because creatures are biologically accurate, yet whimsically presented, readers will enjoy learning about critters’ teeth.

In Crow Smarts, Pamela S. Turner makes the case for the New Caledonian being the world’s brightest bird. Turner and nature photographer Andy Comins join Dr. Gavin R. Hunt and his research team from the University of Auckland in field expeditions to observe crows using and producing wood-probing tools in the New Caledonian forest. The local species of crow uses sticks and makes hooked tools from twigs or the leaves of the Pandanus plant to dig out grubs from logs. Adult crows teach their young to use and produce such tools. Turner briefly covers the use of multiple tools by other animals – humans, chimpanzees, orangutans, and capuchin monkeys – and notes that only the New Caledonian crows and humans are known to make hooked tools. The book does a marvelous job connecting nature and nurture behaviors in animals. And, like all the other books in the Scientists in the Field series, it provides an intimate and realistic portrait of the researchers who have devoted their professional lives to studying nature.

Reading Hope Jahren’s Lab Girl is almost like reading three books for the price of one. In addition to being a memoir by a three-time, Fulbright-winning geobiologist, it is also a fascinating tutorial on botany, paleontology and soil studies. Of even greater value to school- and college-age readers, as well as parents and teachers, is how well the author describes the life of a real scientist as one who “doesn’t perform prescribed experiments,” but “develops her own and thus generates wholly new knowledge.” The author’s obvious love of science and the book’s exquisite writing show how thoroughly she has channeled and extended her parents’ interests. Lab Girls begins with Jahren accompanying her father to his teaching lab, with table surfaces so solid they couldn’t be damaged with a hammer and includes her undergraduate and graduate education, subsequent teaching positions and research postings as far afield as an isolated Arctic Ocean island. Jahren also addresses the compound challenges she faced as a woman scientist in a male-dominated profession, coupled with her eventual diagnosis as a manic-depressive. This book is one of the very few scientist memoirs that are also a great read.

Ricky Zamora and his mother travel from their home in Blue River, on the western side of the Cascade Mountains in Oregon, to his Uncle John’s ranch on the eastern side of the Cascades. Ricky uses his trip as an opportunity to draw maps of what he sees as the terrain changes from the western side of the range to the eastern side. As they approach the ranch, they witness a severe thunderstorm and lightning ignites a wildfire. Ricky leverages the experience to learn more about wildfires and document his knowledge on a variety of maps. The author uses a narrative, hand-drawn maps, illustrations and diagrams to provide rich content. In an easy-to-read style, the author contrasts the climate and vegetation on the windward and leeward sides of the Cascade Mountains, details how firefighters contain a wildfires and how wildfires can help the growth of vegetation and specific types of trees. The maps show changes in vegetation, elevation, amount of rainfall and include scales to show distance. The section of prehistoric fossils helps the reader understand that at one time, a prehistoric sea and sea creatures covered the region. This helps students understand the climatic differences of moist air traveling over a mountain range and creating lush vegetation on one side and a drier climate on the leeward side.

About AAAS
The American Association for the Advancement of Science (AAAS) is the world’s largest general scientific society and publisher of the journal Science (www.sciencemag.org) as well as Science Translational Medicine, Science Signaling, a digital, open-access journal, Science Advances, Science Immunology, and Science Robotics. AAAS was founded in 1848 and includes nearly 250 affiliated societies and academies of science, serving 10 million individuals. Science has the largest paid circulation of any peer-reviewed general science journal in the world. The non-profit AAAS (www.aaas.org) is open to all and fulfills its mission to “advance science and serve society” through initiatives in science policy, international programs, science education, public engagement, and more. For the latest research news, log onto EurekAlert! (www.eurekalert.org), the premier science-news Web site, a service of AAAS. See www.aaas.org.

About Subaru of America, Inc.
Subaru of America, Inc. is a wholly owned subsidiary of Fuji Heavy Industries Ltd. of Japan. Headquartered at a zero-landfill office in Cherry Hill, N.J., the company markets and distributes Subaru vehicles, parts, and accessories through a network of more than 620 retailers across the United States. All Subaru products are manufactured in zero-landfill production plants, and Subaru of Indiana Automotive, Inc. is the only U.S. automobile production plant to be designated a backyard wildlife habitat by the National Wildlife Federation. For additional information, visit media.subaru.com.

About Science Books & Film (SB&F)
Since 1965, Science Books & Film (SB&F) has been the authoritative guide to science resources, bringing expert information to bear on choices of materials for a library, classroom or institution. Published by AAAS, SB&F is the only critical review journal devoted exclusively to print and nonprint materials in all of the sciences and for all age groups. Every year, SB&F (www.sbfonline.com) evaluates nearly 1,000 books, videos, DVDs and software packages for general audiences, professionals, teachers students from kindergarten through college.

Teaming Up to Keep Park Waste Out of Landfills