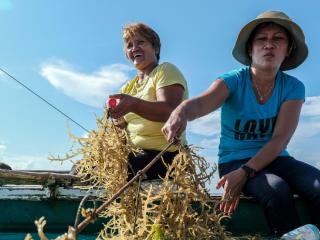 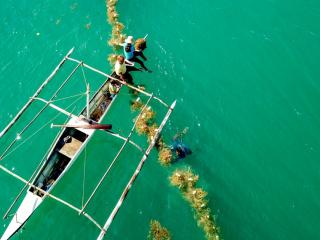 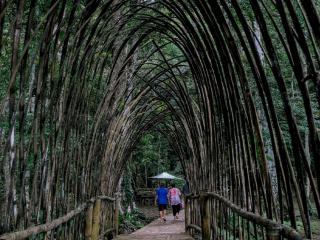 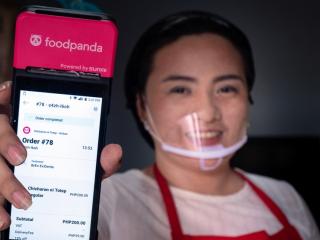 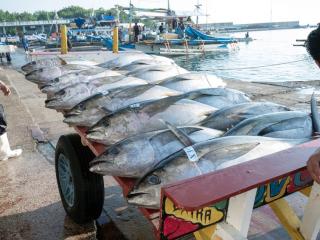 “Enhanced market linkages” and “value chain development” may sound like abstract economic principles, but for thousands of Filipino seaweed and cassava root producers, programs based on these ideas are emerging as economic lifelines.

“I am saving money and taking care of my family,” said Samat Nasa, a cassava farmer whose earnings increased by 300 percent when his local cooperative learned how to prepare and sell their harvest to a major commercial customer instead of small-scale local buyers.

Nasa’s farm is located about 90 minutes from the center of Zamboanga City, one of eight metro areas in the Philippines that have been supported over the last five years by SURGE. WSP staff in the Philippines have been key players in SURGE’s successes. In addition to working with the agriculture and aquaculture sectors, they’ve helped tourism operators strategize how to gain a bigger piece of the island nation’s visitor trade and enabled women micro-retailers to survive the pandemic through digital marketing.

SURGE is the flagship project of USAID’s Cities Development Initiative, a part of the agency’s Partnership for Growth with Equity that works with developing country partners to accelerate inclusive economic growth. SURGE aims to boost the economies of eight secondary cities in the Philippines and their surrounding peri-urban and rural communities.

“By fostering economic development in these regions, SURGE helps share the benefits of growth more broadly in the Philippines and takes pressure off the three largest metro areas—Manila, Cebu and Davao,” said David Hoehner, SURGE project manager for WSP. “SURGE will open up economic opportunities for traditionally disadvantaged populations, and through this, reduce poverty.”

Managed by the International City/County Management Association (ICMA), SURGE has provided a vast menu of assistance to the eight cities and surrounding localities, including Marawi City, since it began in 2015.

As a major sub-contractor to ICMA, WSP has a wide range of responsibilities—from helping local government officials plan for emerging climate change hazards to designing more efficient freight logistics for farmers and aquacultural producers; from leveraging public and private investments for enhanced tourism facilities to helping women micro-retailers procure the clear plastic barriers they needed to re-open safely in the pandemic.

Like all the experts and trainers implementing SURGE, WSP’s staff did more than provide training and technical assistance: they amplified the impact of their available budgets by maximizing participation, making connections and catalyzing partnerships. Those clear plastic barriers, for instance, were provided by a global beverage company that collaborated with WSP.

As WSP staff began working in Puerto Princesa—one of the eight secondary cities—city leaders were clear about one of their top priorities: seaweed production, an important crop used for foods, food additives and chemicals.

“The city government requested we help organize seaweed producers to develop a more cohesive plan for the seaweed industry,” Enriquez said. He and his colleagues helped form the Puerto Princesa-Palawan Seaweed Network—and its members and guest experts brought in by WSP quickly determined that farmers could increase their income with better post-harvest drying facilities and better access to market pricing information that would give them leverage with seaweed brokers.

Seaweed processors and exporters—most located far away in Manila or Cebu—were motivated to support the network because they wanted access to better raw dried seaweed. Eventually, government agencies like the Department of Agriculture and university seaweed researchers became involved in the effort.

“We were surprised to learn that they had been doing a lot of research and development for seaweed, but the results were not actually being disseminated well,” Enriquez said. By connecting the producers with major players in the seaweed value chain, leveraging government resources and obtaining price information that had previously been held close by brokers, SURGE enabled Palawan seaweed producers to earn more, access loans to expand production and create more sustainable livelihoods.

Leaders in Puerto Princesa, along with Legazpi and Tagbilaran, also wanted to grow their tourism industries. WSP experts advised them how to develop a plan.

“The cities did not have comprehensive tourism development plans,” Enriquez said. “They had patches of action plans that had come mostly from the national government. They hadn’t been updated and weren’t responsive to the emerging demands of the tourism industry.”

For Puerto Princesa, the plan called for more domestic and international flights into the city and new infrastructure such as a cruise ship terminal. Much of Palawan province was also ripe for growth in nature-based tourism, but many of its natural wonders required visitors to take long trips by slow boats or poor roads—and then to wait in reception areas with no Wi-Fi nor clean, modern restrooms.

“We concluded that all the amenities for nature-based tourism should be improved,” Enriquez said.

After these priorities were identified, WSP helped the city organize a forum for potential investors. And the tourism plans for Puerto Princesa and other cities helped channel public investment from local and national governments.

“In all our efforts, we are always looking out and forging partnerships with private sector groups and the public sector,” Enriquez said.

The pandemic required a major pivot in how WSP and other SURGE program managers worked with their partners to support local economies. When many women micro-entrepreneurs were shuttered during lockdown phases, SURGE assisted with transitioning their retail sales to online which helped them generate income to stay afloat.

In General Santos, the southernmost of the eight cities, work done before the pandemic to improve cargo logistics provided an important boost to the region’s tuna industry after lockdowns were enacted.

“The city government had asked us to help increase the flights for shipping tuna and other high-value and highly perishable seafood products such as shrimp,” Enriquez said. “We organized meetings with airlines. One of them, Cebu Pacific, the second-largest carrier in the Philippines, agreed to initiate all-cargo flights from Manila to General Santos starting in 2019.”

“When we had our COVID outbreak in early 2020, most flights out of General Santos were suspended. But Cebu Pacific’s cargo flights continued operating. That was a lifeline for most of the agrofishery producers in General Santos.”

This five-year, $47 million economic development project is set for completion in December, but Hoehner anticipates that the firm’s work within the Philippines to improve economic opportunities will continue beyond the conclusion of this contract.

“WSP has a long track record of working in the Philippines, strengthening value chains and fostering economic growth in the country’s poorer regions,” Hoehner said. “It has been a privilege to work with a very talented staff; to see our team work on so many fronts and to creatively respond to various crises that have confronted them in implementation.”

The New Shape of Water: Adapting to Climate Change

Getting Ready for Advanced Air Mobility

Steeling Ourselves for a Sustainable Future

From Landfill to Landscape: The Rebirth of New York City Parks