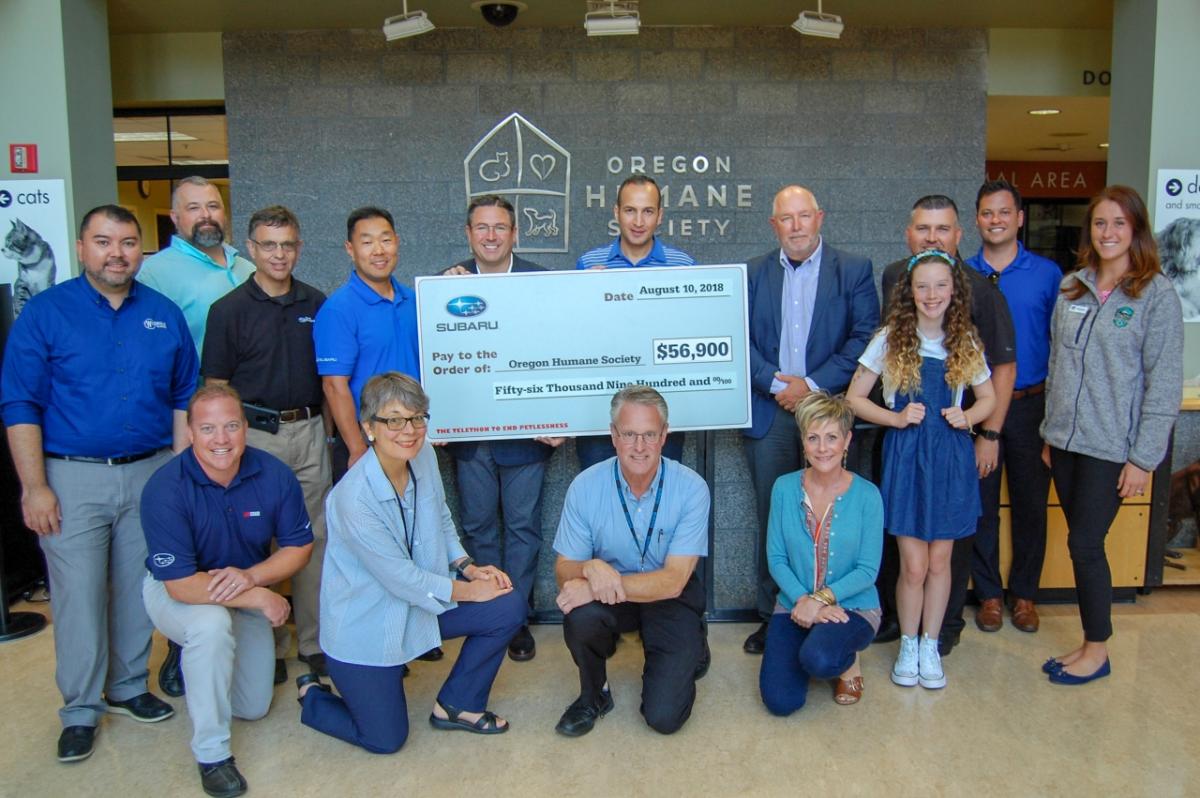 CAMDEN, N.J., October 31, 2018 /3BL Media/– Subaru of America, Inc. today announced the donation of nearly $57,000 to the Oregon Humane Society (OHS) as a part of the Subaru Loves Pets initiative to help improve the safety and wellbeing of animals in local Oregon communities. The gift marks the single largest corporate donation received by OHS in 2018 and is the result of the pets-focused initiative of the automaker’s Love Promise philanthropic platform. Seven Subaru retailers in the Portland metro area participated in the promotion in which $25 from each new car sale was allocated to OHS during the months of June and July. Participating retailers included Carr Subaru, Dick Hannah Subaru, Gresham Subaru, Lithia Oregon City Subaru, Royal Moore Subaru, Wentworth Subaru and Wilsonville Subaru.

“Subaru and our Portland Metro retailers believe in making the world a better place, for our drivers and their furry friends, and the Subaru Love Promise brings that vision to life,” says Jason Hirata, District Sales Manager, Subaru of America, Inc., Portland Zone. “Subaru Loves Pets was our first metro-wide Love Promise event bringing the Portland retailers together to celebrate OHS in its 150th year of helping the animals. We are proud to support OHS and its many great programs with this donation.”

Subaru has been a supporter of OHS since 2004 and has partnered on a variety of programs and events including Doggie Dash and Giving Tuesday.

“We are so grateful for this generous gift,” says Sharon Harmon, President & CEO, Oregon Humane Society. “These funds will go a long way in saving lives and caring for pets in need.”

About Subaru of America, Inc.
Subaru of America, Inc. (SOA) is a wholly owned subsidiary of Subaru Corporation of Japan. Headquartered at a zero-landfill office in Camden, N.J., the company markets and distributes Subaru vehicles, parts and accessories through a network of more than 630 retailers across the United States. All Subaru products are manufactured in zero-landfill production plants and Subaru of Indiana Automotive, Inc. is the only U.S. automobile production plant to be designated a backyard wildlife habitat by the National Wildlife Federation. SOA is guided by the Subaru Love Promise, which is the company’s vision to show love and respect to everyone, and to support its communities and customers nationwide. Over the past 20 years, SOA has donated more than $120 million to causes the Subaru family cares about, and its employees have logged more than 40,000 volunteer hours. As a company, Subaru believes it is important to do its part in making a positive impact in the world because it is the right thing to do.