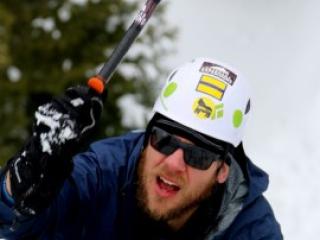 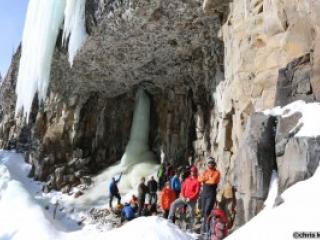 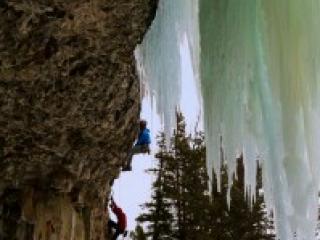 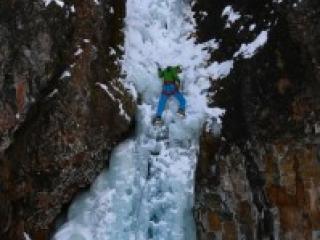 The North Face Ambassador Stacy Bare takes us to Bozeman, Montana, where he and The North Face athlete Conrad Anker teamed up to lead a group of military veterans on an ice climbing experience in Hyalite Canyon.

Mom: What are you doing in March? Any big adventures?

Me: Heading up to go ice climbing in Bozeman[1] with a bunch of other veterans. Remember last year?

Mom: Why do you do that? Go ice climbing?

Dad: Is Conrad going to be there? He’s a nice guy.

When I wanted to join the military they understood the desire and drive to be part of something far bigger than one’s self. They know intimately the joy that fuels selfless service; the feeling of having a clear mission at the start of the day and then 8 or 24 or 48 hours later being able to look back at the task, success or failure, knowing that it is at least completed. And they knew that the military, when I joined in 1996, provided the best avenue to all of those things along with camaraderie, adventure, and a healthy dose of discipline. I was too tall for the Navy, too dumb for the Air Force, but breathing just right for the Army.My parents never asked me why I would want to join the military, but they have asked a lot of questions about climbing. They live in the same small town on the western edge of the Great Plains where they raised my brother and me. The tallest point in town is a covered landfill. Climbing anything other than trees was not part of what we did in the ’80s and ’90s growing up. It is fair to be curious.

In the spring of 2007, when I walked out of the front gates of Ft. Bragg, I was confused by why we had fought the Iraq and Afghanistan war. I was even more confused about how I was ever going to find the same sense of being, mission, and camaraderie I had found in a close shaven jaw line and clean uniform.

My first response out of the gate was to eschew the often confusing and ego-driven veteran support network to seek the sense of adventure, camaraderie, and mission through a combination of intense graduate school studies and copious amounts of cocaine and alcohol. It worked for a time, but two years later — emotionally and physically exhausted and in a mountain of debt three months before the new GI Bill passed — I found myself on the front step of the Rocky Mountains. In Boulder, Colorado, 29 months after I left Bragg and Iraq, my buddy Chuck tied me into a 9.2mm rope and I took the first tentative steps out of my own dark mind.

That day I found a community in climbing and the outdoors, and though it couldn’t fill the gap left by my leaving the service, it would show me a world where all I had joined for in 1996 could be found again. Through climbing, I learned that one did not need to be a war fighter to be a warrior.

I think my mom knows this, too: We’re pretty honest in my family and she reads what I write on the Internet. However, it is fair to wonder why anyone would trade the relative safety of rock for large chunks of frozen ice that could peel off the vertical wall. Well, Mom, I think it’s because on ice and on Alpine, for me anyway — and for the 14 folks we brought together in Bozeman — ice heightens the sense of all those things we find beautiful in uniform. Standing before an ice floe you begin to sense just how big the world around you really is and the kind of adventure you’re about to start. Your mission is clear-cut: Get to the top of the waterfall. And, you don’t get much more selfless in service than belaying someone in the snow and blowing cold, especially when it’s someone you have just met.

So why ice climb? Why climb at all? Why convince other veterans to come from all over the country to Hyalite Canyon just outside of Bozeman, Montana?

Because for a few hours and a few days, we remind ourselves we are still warriors — and that makes every day living that much easier.

[2] The genesis for this trip started in 2012 when Conrad Anker partnered with the Sierra Club on an expedition I helped lead to spend time exploring glaciers in Glacier National Park. During this trip, we hatched our plan to run a clinic for veterans in Conrad’s backyard of Hyalite Canyon. The aim would be to bring along veterans who were looking to push themselves a little further out of the box for adventure and were committed to the goals of finding camaraderie, mission, and adventure. In 2013, the Sierra Club was able to fund, throughVeterans Expeditions and in partnership with The North Face and Montana Alpine Guides, the first veteran specific climbing clinic in Hyalite. The clinic is different than a lot of our other trips in that there is no large expeditionary goal. No mountaintop to climb, no rivers to run. However, ice climbing is an essential skill for people who want to go after big, technical burly peaks; and in other places around the world, big ice climbs can be worthy expeditionary goals. It should also be noted that Conrad met my parents in January. They were impressed.

More from The North Face

The North Face Explore Fund Awards $500,000 to Nonprofits Connecting People to the Outdoors

The North Face Expands Made In The U.S.A. “Backyard Project” Collection

How to Advance Toward Truly Local Economies: Lessons from a Breakthrough Experiment in Local Apparel