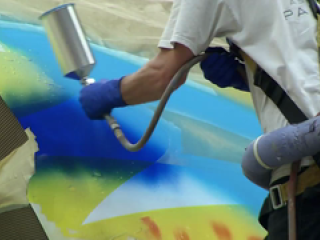 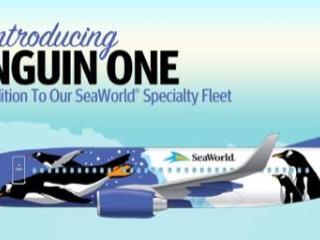 To celebrate this latest entry into the Southwest fleet with Customers nationwide, the companies launched a special three-day offer on vacation packages, including discounted park tickets and exclusive flight and hotel deals.

“SeaWorld has been an important partner to Southwest Airlines for 25 years,” said Kelly.  “Penguin One is a natural addition to the Southwest fleet and a great representation of the evolution of our partnership and our mutual dedication to travel, tourism, and family entertainment.”

The partnership between the two companies dates back to 1988, which began when SeaWorld opened in San Antonio. Southwest and SeaWorld launched their partnership in a high-flying way—with the introduction of a new Boeing 737, Shamu® One!

“Our partnership with Southwest Airlines helps create memorable vacation experiences for families traveling to our SeaWorld parks,” said Atchison. “Today’s launch of Penguin One takes our relationship to new heights that will continue to benefit travelers for years to come.”

The featured penguin species on the aircraft is a gentoo, one of the species found at SeaWorld Orlando’s new Antarctica: Empire of the Penguin™. The attraction includes a first-of-its-kind family ride that transports guests into the penguins’ icy world.

This morning’s ceremony celebrated the introduction of Penguin One in a spirited way as attendees waved black-and-white pom poms, enjoyed black-and-white-themed snacks, and cheered as executives christened the aircraft while SeaWorld’s Pete and Penny Penguin looked on.

In celebration of Penguin One, for three days only, Customers will receive a special offer when they book a flight, hotel, and theme park vacation package for three or more nights to select SeaWorld Parks in Orlando, San Diego, or San Antonio.  Customers will save up to $100 per hotel reservation ($20 per night) when using promotion code 72HRSEA at the time of booking.  For offer details visit http://www.southwest.com/html/promotions/click-n-save-sale-swav.html

Penguin One joins 12 other 737s in the Southwest fleet that carry a unique paint scheme: Shamu One, Shamu Two, Arizona One, California One, Colorado One, Florida One, Illinois One, Lone Star One (Texas), Maryland One, Nevada One, New Mexico One, and Triple Crown One (unveiled in 1997, recognizing five years of Southwest’s top rankings for on-time performance, baggage handling, and Customer satisfaction).

In its 42nd year of service, Dallas-based Southwest Airlines (NYSE: LUV) continues to differentiate itself from other carriers with exemplary Customer Service delivered by nearly 46,000 Employees to more than 100 million Customers annually.  Southwest is the nation’s largest carrier in terms of originating domestic passengers boarded, and including wholly-owned subsidiary, AirTran Airways, operates the largest fleet of Boeing aircraft in the world to serve 97 destinations in 41 states, the District of Columbia, the Commonwealth of Puerto Rico, and six near-international countries. Southwest is one of the most honored airlines in the world, known for its triple bottom line approach that takes into account the carrier’s performance and productivity, the importance of its People and the communities it serves, and its commitment to efficiency and the planet.  The 2012 Southwest Airlines One Report™ can be found at southwest.com/citizenship.

AirTran Airways, a wholly-owned subsidiary of Southwest Airlines Co., offers coast-to-coast and near-international service with close to 600 flights a day to 47 destinations.  The carrier’s high-quality product includes assigned seating and Business Class. As Southwest continues to integrate AirTran’s People, places, and planes into Southwest Airlines, Customers of both carriers may book flights at airtran.com and exchange earned loyalty points between both AirTran’s A+ Rewards® and Southwest’s Rapid Rewards® for reward travel on either airline.

SeaWorld Parks & Entertainment™ is a leading theme park and entertainment company delivering personal, interactive and educational experiences that blend imagination with nature and enable its customers to celebrate, connect with and care for the natural world we share. The Company owns or licenses a portfolio of globally recognized brands including SeaWorld®, Shamu® and Busch Gardens®. Over its more than 50 year history, the Company has built a diversified portfolio of 11 destination and regional theme parks that are grouped in key markets across the United States, many of which showcase its one-of-a-kind collection of approximately 67,000 marine and terrestrial animals. The Company’s theme parks feature a diverse array of rides, shows and other attractions with broad demographic appeal which deliver memorable experiences and a strong value proposition for its guests. In addition to its theme parks, the company has recently begun to leverage its brands into media, entertainment and consumer products. SeaWorld Parks & Entertainment is a wholly owned subsidiary of SeaWorld Entertainment, Inc., a publicly traded company (NYSE: SEAS). Copies of this and other news releases as well as additional information about SeaWorld Entertainment, Inc. can be obtained online at www.seaworldentertainment.com. Shareholders and prospective investors can also register to automatically receive the Company's press releases, SEC filings and other notices by e-mail.