The Power of Job Creation 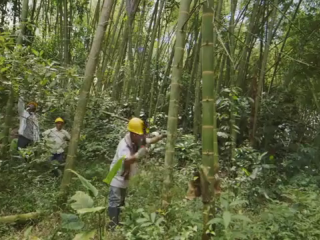 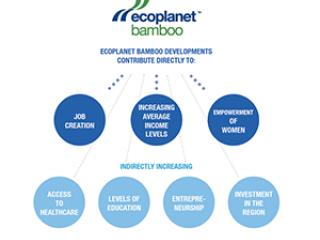 Poverty and the unsustainable use of land often go hand in hand for forest dependent communities across the developing world, leading to severe forest degradation and eventually forest clearance. In such areas, the development of stable livelihoods is arguably one of the most important aspects in the transition of a population from one depending on small scale shifting agriculture, to a cash economy that can co-exist within areas set aside for conservation purposes.

While the NGO sector plays a critical role in ensuring that such transition occurs in a socially equitable way, it inevitably falls to the private sector to ensure that such rural economies develop in a way that ensures continued improvements in quality of life over the long term, and beyond the scope of short term aid.

Within this framework, the development of stable livelihoods through job creation plays a critical role, and its impacts spread far beyond the direct employment of individuals within a community.

Until recently, the only option for smallholders to generate income in the remote El Rama area of Nicaragua’s Atlantic Coast was through the selling of small quantities of milk to aggregators, resulting in communities living well below the Nicaraguan poverty line. In a male dominated society, most of this limited income was squandered on entertainment, while women were marginalized and unable to provide education or adequate health benefits for their children.

The traditional time span for the assessment of social impact of projects is 5 years. Yet, despite being considerably younger, the indirect and widespread impacts of EcoPlanet Bamboo’s Nicaraguan projects are already being seen. Employment of over 350 individuals across a number of communities within the area has provided the framework for an entrepreneurial and business orientated rural society to develop.

The Gomez family is an example of such entrepreneurship. Previously limited to making a handful of raincoats sewn by hand each year, father Arturo Gomez saw an opportunity in the increased activity around EcoPlanet Bamboo’s 2,500 acre Rio Kama farm. He approached the company with a proposition to sell branded raincoats for employees. The El Rama region is a tropical one, and heavy rainfall is frequent and rarely halts daily activity. Now, 12 months later, Arturo and his son Lenin employ a team of 20-25 people and are in the process of installing a small factory to industrialize their operations that will enable them to provide raincoats to farms across the region. Arturo has reinvested his profits into other business developments, including inexpensive mechanisms for providing his community access to clean water.

Similarly, an EcoPlanet Bamboo supervisor saw an opportunity surrounding the large groups of employees working on each farm and used the money he was making from his now stable employment to open a local pool hall. Built as an addition to his house, his wife opens the center daily, after work on the farms comes to an end at 5pm, and employees and their friends and families can play unlimited pool for US$0.3 an evening. Formerly the family was living on less than $2/day, but the combined plantation job and pool center brings in an average of $12/day, allowing them to ensure an education and thereby secure a future for their children.

With such increases in development local authorities in turn become willing to invest in what were previously marginalized communities. The La Fonseca community surrounding EcoPlanet Bamboo’s Rio Siquia Farm previously had to walk the 15km in to El Rama town, as no transport services were available. Such lack of facilities had severe impacts on their ability to access both health and educational facilities. Since the flow of income into the community, a local bus service has added La Fonseca to their route, in turn facilitating the ability for the community to access services beyond their immediate vicinity. With the increased availability of transport, small shops have sprouted up around the bus stop, adding to the flow of income within the community.

The above are just a few examples from an area where a focus on the creation of stable and equitable jobs has led to increased economic activity far beyond the boundaries of EcoPlanet Bamboo’s commercial bamboo plantations and direct sphere of influence.

For more information on our projects please contact info@ecoplanetbamboo.com

As France Bans Plastics Demand For Biomaterials Will Increase

Bathurst - The Centre of the Universe

Why is EcoPlanet Bamboo Focused on Paper Towels?

What’s Happening to the Super-Alternatives? Algae- and Bamboo-Based Options