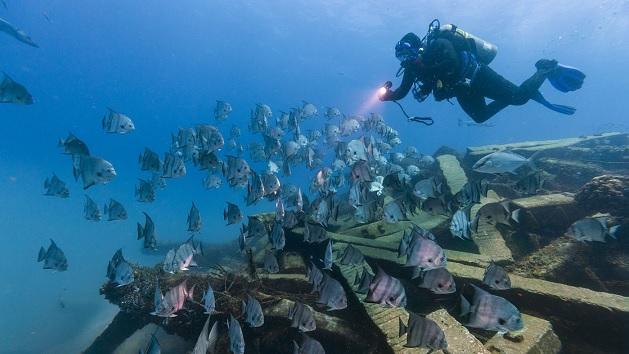 Just think of Dr. Richard Kline and his research team as gumshoes with degrees—and SCUBA gear.

The data in question? Well, that will help resolve an as-yet unanswered riddle—whether reefs, either natural or artificial, can capture and store carbon.

Research work has officially begun on a new marine study to determine the carbon sequestration potential of the Rio Grande Valley (RGV) Reef. The largest artificial reef in Texas lies 13 nautical miles northeast of South Padre Island in the Gulf of Mexico.

The carbon sequestration study—which could provide a seminal moment in the battle against climate change—was announced in May by the Friends of RGV Reef, a non-profit that created the reef in 2017, and researchers at the University of Texas Rio Grande Valley (UTRGV), led by Dr. Kline. The study is being funded through a $250,000 Fueling Futures grant from Enbridge.

“The research is a first of its kind anywhere,” says Gary Glick, President of the Friends of RGV Reef. “It is the first and most comprehensive study in the world to determine whether artificial reefs can capture or trap carbon—and may be a solution in dealing with our real-life climate challenges.”

Since its creation in 2017, the 1,650-acre RGV Reef has attracted millions of new fish and marine life species to the Texas Gulf Coast, such as endangered sea turtles, and has added to the biodiversity of the region. The majority of the artificial reef is constructed out of intentionally sunken vessels, concrete rail ties and cinder blocks.

“The research that’s underway is both multifaceted and comprehensive,” says Dr. Kline, Ph.D., a professor in the UTRGV’s School of Earth, Environmental, and Marine Science who has conducted research on artificial reefs for more than 20 years.

“Our team is seeking to quantify how much carbon is being captured by RGV Reef,” he says. “We are surveying . . . the biomass in the water column, which includes everything from the millions of fish who now live on the reef, to the mass of living microorganisms in the water and those that attach themselves to the reef like sea urchins and barnacles. We’ll also look at the carbon capture capabilities of the bottomland and the sediment, in and around the reef.”

All over the world, efforts are underway by governments, businesses and communities to reduce their carbon footprint through efficiencies, emissions reduction, and environmental initiatives like tree plantings. As a result of this study, reefs could become another important tool in combating greenhouses gases, a key contributor to climate change.

“Every nation that has a coastline may be able to build artificial reefs that could help in the climate battle, while at the same time restoring precious habitat and bringing back fish and other marine habitat around the world,” says Glick.

“That’s the reason this research is so important and really exciting. We can help improve our land and air, while nurturing the oceans back to health. That’s a real win-win for everyone—it’s a potential game-changer for the planet.”