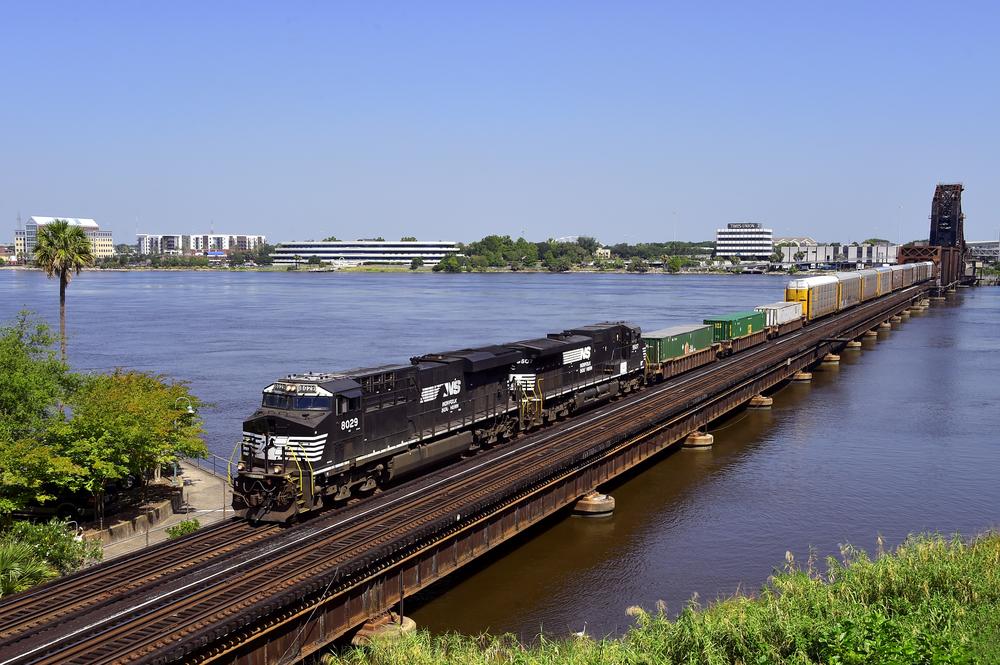 A Norfolk Southern train that moves intermodal and automotive traffic between Atlanta and Jacksonville, Fla., crosses the St. Johns River near downtown Jacksonville.

Hurricane Matthew brought heavy rains and flooding across NS’ service territory in Florida, Georgia, South Carolina, North Carolina, and Virginia. More than 13,000 people in those states sought shelter in Red Cross and community evacuation shelters as the storm moved up the coast.

“Many of our Norfolk Southern employees and facilities are located in these affected areas, and Red Cross recovery efforts are timely, effective, and vital,” said James A. Squires, NS chairman, president, and CEO. “We want our employees, customers, and community neighbors to know that Norfolk Southern is there to help where it’s needed most.”

Norfolk Southern employs 9,500 railroaders in the five states and operates over 5,000 miles of railroad there. For the most part, NS train operations have returned to normal since the storm moved up the Southeast coast.

About Norfolk Southern
Norfolk Southern Corporation (NYSE: NSC) is one of the nation’s premier transportation companies. Its Norfolk Southern Railway Company subsidiary operates approximately 20,000 route miles in 22 states and the District of Columbia, serves every major container port in the eastern United States, and provides efficient connections to other rail carriers. Norfolk Southern operates the most extensive intermodal network in the East and is a major transporter of coal, automotive, and industrial products.