Report finds rising pessimism, frustration and anxiety among Gen Z has contributed to an increase in youth activism and a collective demand for world leaders to take urgent action on human rights and environmental concerns 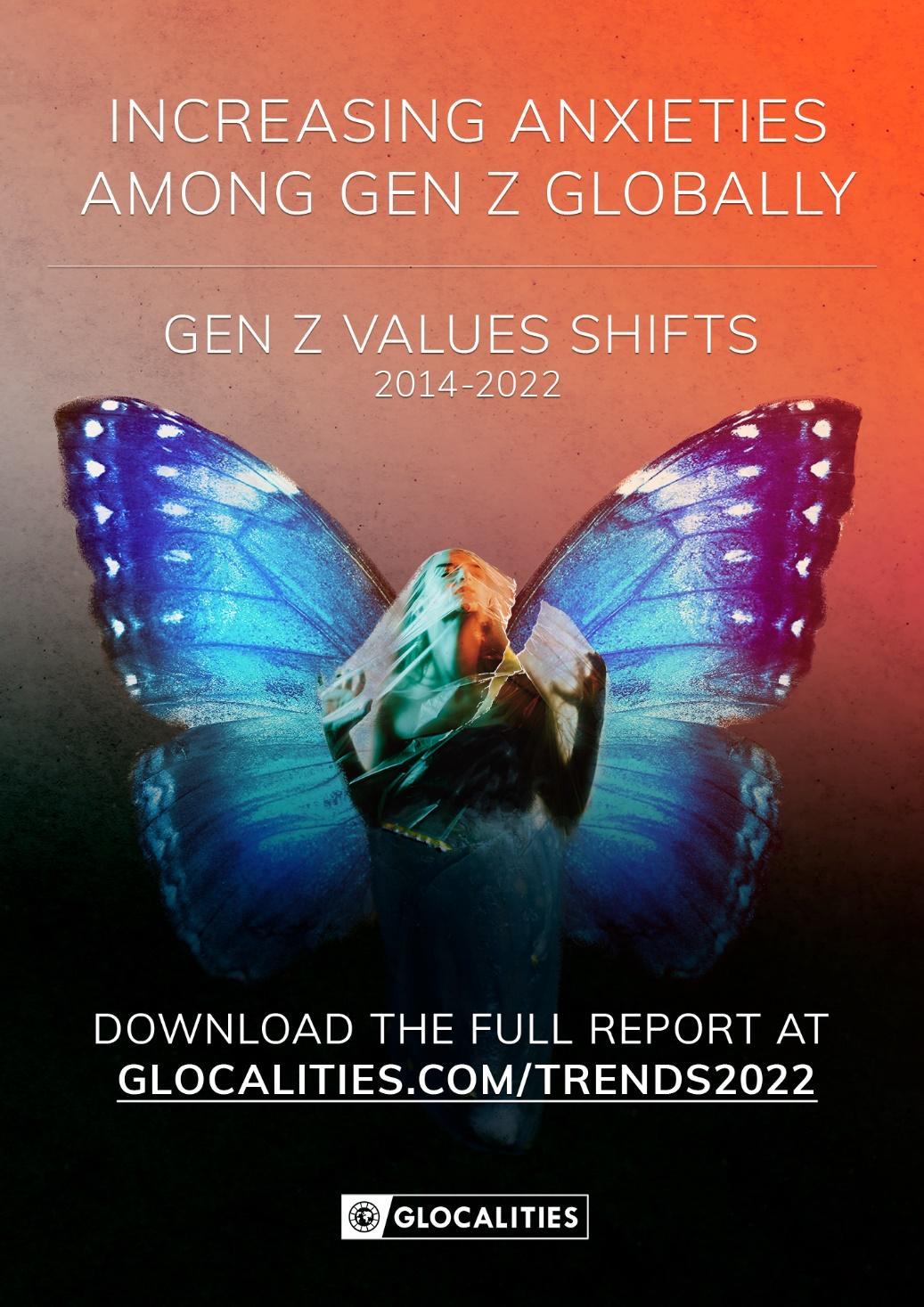 AMSTERDAM, November 29, 2022 /3BL Media/ - Today an in-depth trend study into the values, lifestyle and psychology of young adults from leading research agency Glocalities, in collaboration with international advocacy organisation Global Citizen, has revealed significant shifts of values amongst the young worldwide over the last eight years.

According to research, 47 percent of 18-24 year olds (Gen Z) feel the future holds nothing for them, with their dissatisfaction now fuelling an increase in emancipation and political engagement. The research further highlights that 49 percent are concerned about human rights issues, 47 percent about climate change, and 45 percent about extreme poverty. These concerns have become catalysts triggering the surge in activism currently seen across the world, with Gen Z taking their future into their own hands, and declaring the most pressing crises need to be urgently addressed by world leaders.

The most comprehensive trend study into values to date, across 20 countries between 2014 and 2022, is based on nearly 300,000 interviews and tracks shifts in values and psychology across all age demographics. The report highlights that post-pandemic Gen Z (18-24 years old) is becoming increasingly dissatisfied and pessimistic about their future, rising from 40 percent in 2014, to 47 percent in 2022. This increased pessimism partly explains the mental health crisis among younger people, as many of their hopes for the future have been shattered by the pandemic. This disillusionment is now being matched with an increase in political engagement as people everywhere demand action now. Government leaders need to demonstrate they are serious about addressing peoples’ concerns through delivering proactive and fully funded solutions.

The research findings include:

According to data from the Inter-Parliamentary Union, although more than half of the world’s population is under 30 years old, only 2.6 percent of the members of parliament are under 30 years of age, and less than 1 percent of them are women, further highlighting the underrepresentation of youth in political institutions.

Martijn Lampert, Co-Founder and Research Director of Glocalities said: ‘’A cultural revolution is on the way among Gen Z globally. In these times of polycrisis the new generation is being held back in its development and increasingly feels alienated and pessimistic about the future. These developments are visible in a global mental health crisis. At the same time, values convergence is taking place between East and West, North and South, showing new ways out of the crisis. Young adults in upcoming economies are increasingly emancipating while support for patriarchy is going down. This is visible in recent waves of protest against oftentimes repressive regimes that are unwilling to facilitate change. Young adults in advanced economies are increasingly searching for meaning, purpose, quality of life and spirituality.

The digital revolution has not only created a global marketplace of experiences and consumerism, but has also enabled the spread of emancipative values, spirituality, creativity and self expression. Gen Z, the highest educated and best connected generation ever in human history, is at the forefront of this profound transformation. The research shows that they are the pioneers of new routes for moving beyond the polycrisis that the world is now experiencing. The change makers among Gen Z are carriers of hope for a better future’’

Michael Sheldrick, Co-Founder and Chief Policy, Impact, and Government Affairs Officer, Global Citizen said: “Despite increased disenfranchisement and growing anxiety, we also see from this research a boost in interest in politics, as people demand action now. World leaders need to demonstrate they are serious about addressing these concerns. Promises on climate finance must be kept, financial institutions must go from billions to trillions in support, and emissions must be reduced at a faster rate.”

Volker Türk, United Nations High Commissioner for Human Rights reacts to the survey findings: “This report is of great relevance as it shows that human rights issues are a major concern for the younger generation, and that young people are increasingly interested in engaging in politics. Young people demand a better future. They need to be empowered to realize their full potential.”

ABOUT THE SURVEY
The Glocalities international trend survey is based on 295,166 interviews among 208,152 respondents from 20 countries. The Glocalities surveys were conducted in 2014, 2016, 2018, 2019, 2020, 2021 and 2022 in the first quarter of the year through the online research panels of Dynata and Kantar, two agencies that are specialized in international fieldwork. On average, the 20 countries that were included in this trend analysis have an internet penetration of approximately 76%. Quotas were set beforehand, and the datasets were weighed according to national census data. Each country has an equal weight in the total dataset when conducting international analyses.

The survey samples of 19 out of the 20 countries were weighted to be representative for the populations of 18 to 70 years old with respect to age, gender, region and education. The only exception is India, where we weighed the samples according to the educational distribution of the online population and to the offline population with respect to age, gender and region, due to the very low internet penetration in India. The questionnaire for the 20 countries included in the trend study was conducted in 13 languages and was (back) translated from the English source questionnaire by professional translators.

ABOUT GLOCALITIES
Glocalities is an Amsterdam-based international research agency that specializes in global insights based on values, culture and psychology. The Glocalities research program that started in 2014 now covers 35 countries in total. NGOs, companies and the public sector use Glocalities insights to connect with audiences, based on a deep understanding of trends, people and cultures. In the international Glocalities surveys conducted since 2014, we have incorporated several research instruments that provide a deeper understanding of people, such as values segments, universal archetypes and trends. These instruments make it possible to obtain a holistic view of groups of people and gain deeper knowledge of their drivers, aspirations and behaviors. Free reports on a multitude of topics such as the Sustainable Development Goals are available on our website. For more information, visit www.glocalities.com

ABOUT GLOBAL CITIZEN
Global Citizen is the world's largest movement of action takers and impact makers dedicated to ending extreme poverty NOW. We post, tweet, message, vote, sign, and call to inspire those who can make things happen — government leaders, businesses, philanthropists, artists, and citizens — together improving lives. By downloading our app, Global Citizens learn about the systemic causes of extreme poverty, take action on those issues, and earn rewards, which can be redeemed for tickets to concerts, events, and experiences all over the world. For more information, visit www.globalcitizen.org and follow @GlblCtzn.