National Grid on the Future of Storm Resiliency

Sep 6, 2016 11:00 AM ET
Campaign: The Democratization of Energy: Climate Change, Renewables, and Advancing the American Dream an eBook 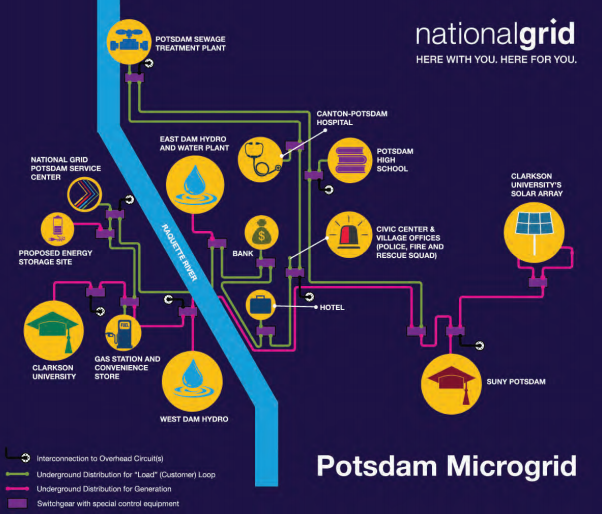 The microgrid is an opportunity to try new technologies while creating a regional storm restoration hub.

The following article is taken from the “The Future of Storm Resiliency” chapter of Dean Seavers’ Democratization of Energy eBook.

With the peak of hurricane season right around the corner, storm resiliency is top of mind at National Grid.  As global climate change continues to increase the frequency and intensity of storms during hurricane and winter seasons, we must improve crisis preparedness and response. We need to ensure that emergency services have the power they so critically need and that companies like us can focus on getting customers and businesses back up and running as quickly as possible.

I am keenly aware that one of our biggest challenges while responding during these storms is mobilization. With trees down and power out, it is difficult – if not impossible – to move equipment into the area faster.

Some impacted areas must rely on generator backup systems to provide partial power until proper resources arrive. To address this critical delay we need to “harden” the electric grid to maintain a supply to essential services like hospitals and first responders.

The North Country of Upstate New York is home to some of the nation’s most severe storms. That’s why we’re teaming up with Clarkson University, SUNY Potsdam, and the Village of Potsdam to create a system that we believe will maintain essential electric service for a safer, more efficient, and more timely restoration. The initiative, one of our demonstration projects under New York’s Reforming the Energy Vision (REV) is formally known as “The Design of a Resilient Underground Microgrid in Potsdam, N.Y."

What is a microgrid? In essence, it’s a localized grouping of electric sources that normally connect to the traditional centralized power network (macrogrid), but can disconnect and function autonomously like an island of energy during storms.

The key element of the microgrid will be a new underground distribution loop that interconnects critical energy supply and generation in the village with National Grid’s overhead primary distribution system. In the event of an outage, the underground system will separate from the overhead system, becoming the islanded microgrid that will deliver power to connected emergency service providers. This microgrid can provide power to essential services for up to two weeks following an extreme weather event, servicing not only the immediate area but also enabling the town to act as a regional hub for restoration activities.

Since the Potsdam Microgrid is a demonstration, we’re also looking at it as an opportunity to advance technology by involving multiple interconnected electric power customers and a variety of generation systems that promote resiliency for our customers and communities. Potential sources include a hydroelectric facility on the Raquette River, a twomegawatt solar installation at the Potsdam Municipal Airport and a combined heat-and-power (CHP) generation system at the State University of New York at Potsdam.

Additional generation needed by the town may be sourced through other innovative resources, including battery storage and hybrid fuel cells, technologies that have never been deployed in this kind of system before.

All combined, these generation sources could supply five to ten megawatts of power to the microgrid during extreme weather events.

This program is a chance for National Grid, the communities we serve, and the energy industry as a whole to envision the future. Do microgrids belong in every municipality? What’s the right mix of generation sources to protect against a wide range of extreme weather events? How should the microgrid be controlled and financed?

These key questions about the transition to the electric grid of the 21st century remain unclear, but with the Potsdam Microgrid, we intend to begin answering them.

And in the meantime, we’re addressing a significant need for our customers in the North Country of Upstate New York.

At Red Hawk Fire & Security, Dean’s most recent venture, he was a founder and served as President and CEO. Red Hawk quickly became the second largest independent fire and security platform in the U.S., providing integrated security solutions to large and mid-sized commercial customers.

Dean has a strong background in financial strategy, performance improvement, and operational leadership. At National Grid, his focus is on continuing the performance progress that underpins the company’s U.S. business while driving its Connect21 agenda of building the advanced natural gas and electricity networks that are the foundation of our 21st century digital economy.

Dean and his family have a home in Boston.