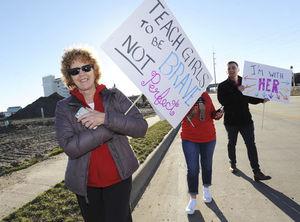 ST. JOSEPH, Mich., March 9, 2017 /3BL Media/— Shannon Sigmund likes to talk about women’s rights and is the first to explain that feminism isn’t just for one gender.

The St. Joseph resident was among the dozens of women who gathered at Plank’s Tavern on the Water on Wednesday to take part in Tennies & Toasts. The public event was put on by the Women’s Network, a Whirlpool Corp. employee resource group, as a way to celebrate women and raise funds for 100 Women Strong.

Sigmund opted to donate money to make a sign that she could carry during the 2.5-mile march that was part of the fundraising event. Sigmund used several colors to form the statement “Feminist: Any person who believes in the social, political and economic equality of the sexes.”

Continue reading on the Herald Palladium.