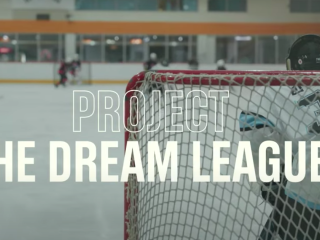 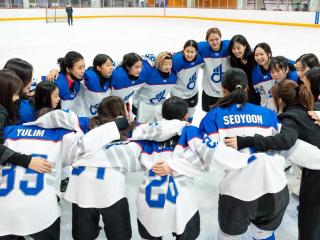 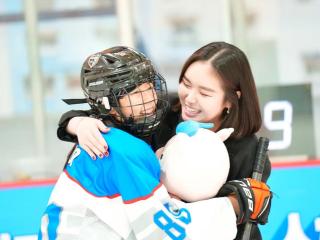 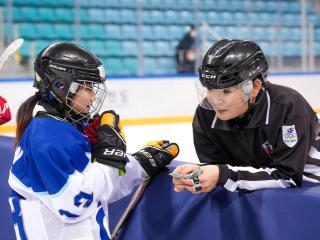 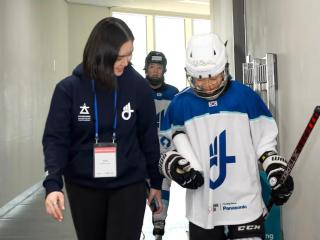 With one year to go until the Winter Youth Olympic Games Gangwon 2024, we speak with IOC Young Leader from Korea Sang Eun Lee about how she is fighting for gender equality by giving women and girls the chance to play ice hockey.

Sang Eun Lee participated in many sports as a child in South Korea, but when she joined a mixed-gender ice hockey team, she was treated differently from her male team-mates. Now an IOC Young Leader, she has used her experiences to found the Dream League, giving girls the chance to enjoy ice hockey in a safe, nurturing environment and potentially compete at the Winter Youth Olympic Games Gangwon 2024.

From the moment Sang Eun Lee was able to run, she was encouraged to take part in a wide array of sports by her parents, who believed sport should not be a privilege, but a core part of life. After a year of skating short track at her local rink, she graduated to longer distances, setting her on the path to becoming South Korea’s national speed skating champion in South Korea.

“That was the first moment I realised that I can really do great things,” she said. “That I have the potential to be excellent in my life.”

Unfortunately for Sang Eun, her sporting journey was not always so simple. While she enjoyed speed skating, the solitary nature of the sport and her introverted nature meant she was quite reserved and didn’t interact with many of her peers. She therefore decided to join the local ice hockey team in Gwacheon to try to build confidence and be part of a more social environment. However, the realities of a girl joining a predominantly male-dominated sport meant that she was often an afterthought to her coaches.

“I saw many girls being mistreated by their coaches, myself included. I had no dressing room and training was often at the late hours of the evening and ending after midnight,” she revealed. “I was already a really introverted kid and I wasn't able to recognise when I was being mistreated. Ice hockey was the sport that really got me thinking about inequality and how important it is for women to be able to advocate for themselves.”

Stepping back into sport

Following this experience, Sang Eun decided to take a step back from sport to focus on her studies, earning a bachelor’s degree in International Studies from Ewha Women’s University. Then, in 2017, she took her first steps back into the sporting world – in a new capacity.

With the Olympic Winter Games PyeongChang 2018 approaching, Sang Eun was eager to take part in the test events in her home country. After volunteering in the media centre at the 2017 FIS Ski World Cup in PyeongChang, she took a role as a team host and professional assistant for the Swiss ice hockey team at the Games the following year.

“It was the first time I experienced not being on the field of play,” she said. “I was able to think about who actually makes the Games happen, how entourages support athletes, and I learned much more about safe sport. When I was an athlete, it was hard to understand what overtraining and doping are, but as a team host, I learned about those.”

Inspired by her experiences in PyeongChang, Sang Eun was determined to continue supporting athletes and use sport as a tool for positive change. Her best friend, Geewon Yoo, had established the Dream Cup football tournament for children through the IOC Young Leaders programme, and she encouraged Sang Eun to apply for herself. And so, in 2021, Sang Eun was chosen as an IOC Young Leader and, the following year, thanks to the resources and support provided by the programme, she founded The Dream League.

“The biggest problem with women's ice hockey is that there are no games at all for players at the national level, so they can't improve,” Sang Eun said. “That's why I created the first-ever women's league in Korea, with six teams and around 150 players.”

Guided by the slogan “Let the puck drop for the girls”, The Dream League gives girls the chance to train and compete in ice hockey matches. Working with the Korea Ice Hockey Association, The Dream League aims to reduce the gap between men’s and women’s ice hockey and ensure that children from every province of Korea can participate. The project is further supported by the PyeongChang 2018 Legacy Foundation, which allows The Dream League to use venues from the Olympic Winter Games for training and matches free of charge. As these same venues will also be used during Gangwon 2024, The Dream League’s activities are a good opportunity for the Gangwon 2024 Organising Committee to test the ice, along with some aspects of operational readiness.

Fuelled by her own experiences of ice hockey as a child, and the challenges that she faced, the project is very personal to Sang Eun. Indeed, not only has she created The Dream League, but she has also founded her own team, the Dreamlinkers, made up solely of women, from the players to the coaches to the referees.

“Honestly, I didn't realise how much this programme would mean to the girls,” she said. “The interaction between the players and the coaches, being able to talk about what they experience as women in sport – it really helped everyone to feel comfortable for the first time in ice hockey.”

On the back of this project and her work helping athletes in PyeongChang, in 2022 Sang Eun was appointed to the IOC Athletes’ Entourage Commission, which advises the IOC on matters concerning supporting and protecting clean athletes.

The Dream League, meanwhile, is set to go from strength to strength in 2023, expanding to a two-division system and doubling the number of teams to 12 and participating players to around 300. Earlier this month, a Road to The Dream League camp was held for three days in Gangwon, the Gangneung Hockey Centre, for 50 girls and young women aged from 11 to 24. The camp was one of the pre-YOG events for Gangwon 2024.

With one year to go until the Winter YOG, and many of The Dream League’s players already representing their age group national teams, there’s every chance that we will see some of these athletes representing South Korea on the Youth Olympic stage in 2024.

The IOC Young Leaders Programme has been supported by Worldwide Olympic and Paralympic Partner Panasonic since 2017, and this will continue through to 2024. Panasonic, as the programme’s founding partner, is committed to supporting the IOC Young Leaders through different initiatives, for example providing its creative and technological expertise, along with its network of influencers and ambassadors, to inspire the Young Leaders and equip them with the skills and tools they need to enhance their projects.

Find out more about Panasonic’s support for the programme.