The Ice Age Is Proving a Very Hot Topic 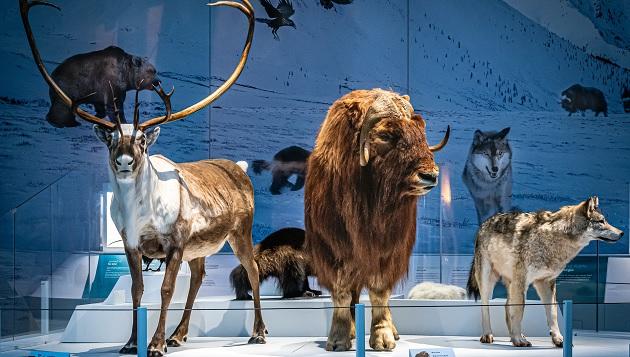 Planet Ice may be coming to a museum near you.

“Arctic foxes, wolverine, caribou and mastodons – we’ve got it all,” says Stacy Wakeford, Chief Content Officer at the Canadian Museum of Nature, which produced Planet Ice: Mystery of the Ice Ages. “This exhibition is a Canadian-grown experience about ice, the ways it has shaped our planet, and how important it is to preserving life as we know it.”

Planet Ice is a highly interactive experience aiming to educate and inspire visitors about the history and important role of ice on our planet. Borrowing concepts from a previous exhibition toured by the Museum of Nature that had a decade-long stint in the early 2000s, select specimens and artifacts have been given new roles to help present the importance of ice in the context of current times.

For an exhibition with such frigid contents, Planet Ice is certainly touching on a hot topic.

“We know the Ice Age is a really popular and highly engaging topic for families, so we wanted to use it to address the ideas of climate change through a perspective that puts an interesting twist on it,” says Wakeford. “Instead of saying warming is bad, we want people to believe that cold is great.”

The exhibition first opened in fall 2020, and it’s a particularly special one. While the museum generally brings in special exhibitions produced by other museums and science centres across the United States and Canada, Wakeford’s team successfully pitched a homegrown exhibit to produce and own.

“It was a really ambitious undertaking for us,” says Wakeford. “From soup to nuts, the talented team here at the museum did everything from design, concept, production to finally sending it on tour.”

Enbridge recently made a $25,000 Fueling Futures donation to the Canadian Museum of Nature as part of our commitment to building safe, vibrant and sustainable communities. The funding helped bring the Planet Ice project to life, and will support touring costs as the exhibition travels from museum to museum for the next several years.

At an opening event for the exhibit, Enbridge’s Dan Borris delivered remarks about the alignment of sustainability goals achieved by the partnership with the museum.

Planet Ice showcases more than 120 specimens, models, and artifacts (some never before seen) that illustrate how species—animals and humans alike—adapted and thrived in cold climates during the last glaciation period.

“These specimens are really quite spectacular,” says Wakeford. “In addition, we have models of Neanderthals, showing how our hominid ancestors evolved in cold, as well as ancient tools used by the Tuniit (Dorset) and Thule-Inuit peoples in Canada’s Arctic. These are from the Government of Nunavut’s collections, and it’s the first time they have ever been exhibited in the world.”

Visitors can even enjoy two “magical moments” that create the illusion of a woolly mammoth or American lion emerging from a snow-filled landscape. This combination of animation, artistry and technology is the result of a creative collaboration between the museum and Montreal’s award-winning multimedia studio, Moment Factory.

Planet Ice is the museum’s summer special exhibition, and will run through the Labour Day weekend. Located in Canada’s capital city of Ottawa, the museum can attract a whopping 400,000 visitors each year.

“It’s so thrilling to see people engaging with the exhibition and really getting the message,” says Wakeford. “They’re having a great time while learning something—I’m so proud of what the team has built.”