Finding a Home at Olive Garden 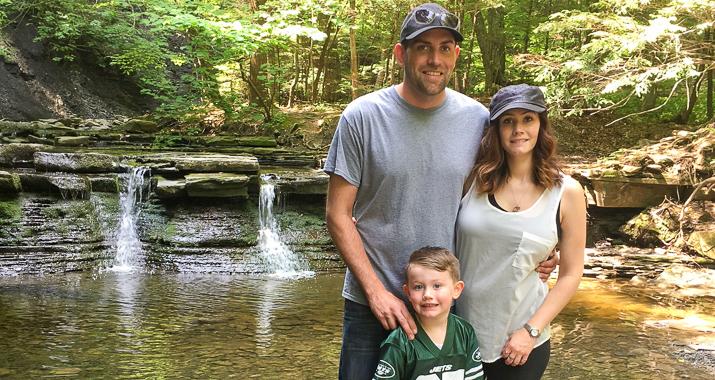 Olive Garden Director of Operations Ian Nason and his wife are expecting a second child, and he’s eager to delve deeper into this new chapter — his other growing family.

Finding a Home at Olive Garden

When Ian Nason thinks about adversity, he doesn’t view it in a traditional sense – an unfortunate event or circumstance – rather, he has a higher opinion of it. That positive outlook has helped him overcome the odds with hope and achieve much personal and professional success.

In August 2015, Ian was named a Director of Operations for Olive Garden. That promotion was a far cry from where he started his life’s journey.

His journey began in a scattering of states, 13 in all, mostly west of the Mississippi River. For the first 10 years of his life, it was just Ian, his two brothers and his father. Very often they didn’t have a place to call home or enough money to even buy food. But that troubled chapter of his life never slowed him down.

“I had a very traumatic childhood and upbringing,” said Ian. “I wouldn’t change it for anything right now. There were a lot bad experiences, but at the end of the day, they are all just experiences. It’s what you take from them that helps you later in life. I learned how to work hard as a kid. I knew no one was going to give anything to me. I had to go out and earn it. It was a struggle, but it became my work ethic. If I wanted something, I knew I had to work hard to get it.”

Ian recalls a particular moment in his childhood that molded him as a person and his outlook on helping others even at age nine.

"There is no goal that is too high." — Ian Nason

“I was in a grocery store without enough money to buy food and a little old lady paid for my food and told me to keep my money. That stuck with me my entire life. I now give back for selfish reasons because it makes me feel good, but it is truly important to me.”

The next 10 years of his life added more conflict and hardship, but a consistent theme surrounded the pain. Ian was not going to lose hope for his future. During this time, he was reunited with the mother he never knew. His family put down roots in Washington state for a short time while Ian was in high school, but moved again before he could graduate.

“I remember sitting with a counselor in high school being judged by my family history and being told my goals were too high and unrealistic. That always drove me to prove them wrong. There is no goal that is too high.”

He knew that not graduating from high school or college would make his goals more difficult to attain, so he put in the work on his own and earned his GED. Shortly after that, he worked his way up to a manager position with a sporting goods store but his ambition got the best of him again.

He relocated to New York and took on a role as an hourly busser at Olive Garden. On his first day on the job, he knew Olive Garden was the place where he was meant to be.

“I had a career before Darden, but when I moved to New York, I gave up my salaried job to work in the restaurant. I chose to be an hourly team member at Olive Garden and I loved it. What drove it home for me was during my orientation, learning about how Dave Pickens, the former president, started as a line cook. I was really inspired by that.”

He didn’t stay a busser for long. He quickly worked his way up to line cook, server, trainer and assistant manager. He knew if he put in the hard work and effort, he would continue to advance. His goal from day one has been to eventually become the President of Olive Garden.

“At Olive Garden, my motto was ‘Act as if’ – which meant when I was an hourly team member and wanted to be a trainer, I didn’t wait until I had the title. I did the job to help my co-workers. When I wanted to be a manager, I acted like a manager and presented myself as a manager. I worked really, really hard. I knew the company believed in me.”

Darden and Olive Garden did believe in him and instilled that hope in Ian when he was promoted to trainer and successfully opened 10 restaurants. He did so well that he took a giant step after he was named General Manager – he opened his own restaurant. For three years, that restaurant overachieved with Ian at the helm, so much so that he was promoted to his current role as Director of Operations.

In this new role, he takes the time to work with his restaurants to help them reach their goals and provides hope in the future for his teams.

“I spend most of the week in restaurants to work with the teams and coach the managers. I try to spend my time in restaurant away from the computers so I can truly engage the team.”

Being less than a year removed from his promotion, he knows he has a lot to learn about how to be the best he can be for his restaurants and team members. Because of the pressure he puts on himself, he regularly seeks out advice from more senior directors including his mentor, Don Diehl.

“It’s still a learning process. When I feel like I’m not being strategic enough or I can do something better, I reach out to Don to get some best practices. I was told a long time ago that you have two ears and one mouth, so you should listen twice as hard as you speak.”

Don and Ian go back four years when Ian was the Service Manager of Olive Garden in Burlington, VT, and Don was his director. Even then, Don knew that Ian had special leadership qualities in him.

“I  know all about his unfortunate upbringing, but I’m very impressed with how accomplished and focused he has become despite all his challenges.” — Don Diehl

“I remember as a manager, Ian completely changed the culture in his restaurant and entitled the team to self-manage themselves to meet his high expectations. He has a gift to change people’s behavior to be the best they can be.”

Mentorship is a two-way street for Ian, so he also volunteers his time to anyone who asks for it. He always makes time to talk to youth groups about the challenges in his life and how they can overcome them.

Ian instills hope in the kids and helps them understand that adversity is not the end, but rather life’s way of challenging you to work harder and to persevere.

“Growing up in a harder situation, many people think you are going to be a product of that environment, that it’s systemic. But that’s just not the case. I go speak to kids at the YMCA. I share my story and their eyes open up. I think for so long they think they can’t do things or achieve because of their circumstances. But when they hear my story, it gives them hope that they can do whatever they want.”

In his 12 years here, Ian has pushed himself to new heights with his hard work and dedication. He has also seen the depths of despair, losing both of his parents. But through those difficult times, Darden and Olive Garden became his surrogate family.

“Olive Garden has always been there for me and it means the world to me. When my mom died, I got a card from a senior executive and that really reinforced that we-are-all-family-here mentality.”

Ian and his wife have a four-year-old son and a baby girl on the way. He knows that his growing family will provide the newest chapter in his life, one that he is eager to face head on. “I am happy with where I’ve been and what I have overcome in life, but now I’m fortunate to be able to plant some roots with my family.”

Those same roots have been the foundation for helping others reach their dreams and understand the true meaning of adversity.

‘Every Day is Veterans Day’ for LongHorn Steakhouse Cook