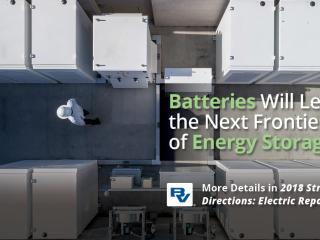 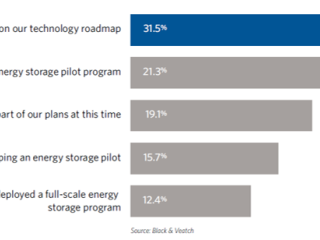 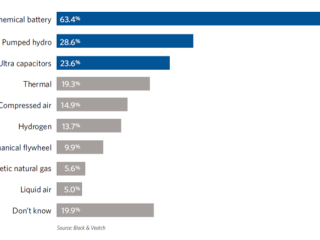 Bolstered by decreasing costs and strengthening regulatory support, demand for renewable energy is increasing as wind and solar photovoltaics continue to become more prominent contributors to utilities’ generation and revenue mix. As enthusiasm for renewable energy grows, wind and solar remain hampered by how much energy can be stored when generated to be used subsequently when energy is needed.

Intermittency and periodicity are two of the largest barriers to fully embracing renewable energy as a viable alternative to traditional generation. Renewable power may not be available when needed, or too much power may be generated when it is not. This feature of renewable power has spawned a growing need for robust energy storage that can smooth out this cycle, effectively harnessing the time-varying and geographically distributed energy supply and improving electricity availability and resilience.
Storage systems can address capacity constraints, improve power quality and reliability and allow utilities to effectively increase the
amount of renewable electricity generation on the grid.

According to GTM Research and the Energy Storage Association’s newly released U.S. Energy Storage Monitor 2017 Year in Review, the United States deployed 100 megawatt-hours (MWh) of grid-connected energy storage in the fourth quarter of the year, marking a cumulative 1,080 MWh deployed between 2013 and 2017. GTM Research expects that the U.S. market will almost double this total in 2018 alone.

A CHANGING REGULATORY OUTLOOK
Despite uncertain policy questions in Washington, D.C., states, regions and agencies continue to rally around renewable energy
initiatives, increasing the need for viable energy storage solutions. California and Hawaii have risen to the forefront as leaders in renewable energy and energy storage. California’s Public Utilities Commission has mandated that the state’s three investorowned
utilities install 1,325 megawatts (MW) of energy storage by 2020.

And just recently, California’s energy regulators passed a building code requiring most new, low-rise residential homes constructed after 2019 to have built-in solar-powered energy systems, making it the first state to go down this path. Hawaii continues to work toward its goal of attaining 100 percent green energy among its electric companies by 2045.

In February 2018, FERC ordered the removal of barriers to the participation of electric storage resources in energy services markets. This is a landmark effort to enhance competition and promote greater efficiency in the nation’s wholesale electricity market. This decision is significant because it enables energy storage providers to buy and sell in wholesale markets at wholesale prices.

Efforts are spreading beyond California, with regions such as the Pacific Northwest and New England, along with the states of New York and New Jersey, implementing legislation and tax incentives to promote renewable energy and energy storage solutions.

THE EVOLUTION OF DISTRIBUTED ENERGY

ENTHUSIASM GROWS AS PRICES DECLINE
Just as DVDs, high-definition televisions (HDTV) and computers seemed cost prohibitive when they first came to market, advancing technology and market competition soon brought down prices, making them accessible to most consumers. We can expect to see energy storage follow suit.

Today, the price of energy storage continues to drop, part of which can be attributed to the electric vehicle industry driving battery
cell production to a much greater extent than stationery energy storage. Spurred by the rise of EVs, lithium-ion batteries are declining in cost to the point where they are moving into broader, more price sensitive markets. For example, Tesla’s battery at the Hornsdale Power Reserve in South Australia was paid $790/MWh to absorb excess electricity from the power grid.

In the United States, Tucson Electric Power entered into a power purchase agreement with a 100 MW solar and 30 MW/120 MWh battery for approximately 4.5 cents per kWh. This project benefits from the fact that if a battery charges mainly from solar, it can receive the same 30 percent tax credit as the solar itself. Increased demand, spurred by electric customers who are saving money on their electric bills, is also driving down the cost of storage. Traditionally, utilities levied a demand charge on C&I customers based on the monthly maximum power draw, and in certain regions, those charges are significant.

But now we’re seeing energy storage begin to offer solutions. When building or facility electric systems are attached to battery storage, the latter can help offset peak power demand on the grid, preventing it from seeing the peak power draw. This helps spare customers the high costs associated with peak demand electricity consumption, such as on summer afternoons, when air conditioners are pumping and manufacturing is in full swing, or on winter mornings, when households crank up the heat.

BATTERIES LEAD THE NEXT FRONTIER OF ENERGY STORAGE
In addition to solid state batteries, suppliers are attempting to create classes of batteries with improved attributes over lithium. These new flow batteries use liquid instead of solid cells, and as a result, can hold a much longer charge by virtue of the size of the tanks storing the liquid. In addition, flow batteries do not suffer the cycling degradation attributed to lithium-ion batteries.

According to this year’s survey results, however, novel storage technologies such as long duration flow batteries, as well as high cycle life flywheels, are still not gaining broad acceptance; 44 percent of respondents were neutral on the importance of these technologies, and only 7 percent found them very important.

The data indicate that electrochemical batteries lead the way among respondents, of whom 63 percent see the technology as increasingly instrumental on the grid. This is followed bypumped hydro, ultra-capacitors, thermal, compressed air, hydrogen, mechanical flywheels, synthetic natural gas and liquid air (Figure 2).

MOVING BEYOND THE EARLY ADOPTERS
Today, energy storage is where solar was five to 10 years ago: bolstered by a lot of innovation and new startups, but with little standardization, lots of conflicting data and a lack of information as to what the technology actually represents. This confusion makes it challenging for developers and utilities to proceed to widespread adoption and for engineers to accurately size and specify
storage systems.

In addition, while costs are clearly dropping, storage solutions and renewable energy in general remain less economical than their next best alternatives for many firms and utilities. But increased competition, increased manufacturing and new regulatory controls should bring prices down further, even as tax incentives make it easier for developers and utilities to monetize offerings.

Optimistically, more than half of respondents in this year’s report said they see renewable energy resources becoming the primary source of generation of electricity in the United States within the next decade. This illustrates that the skepticism and reluctance of years past have finally given way to major line items — and in some cases, actual deployments — on utilities’ technology roadmaps.
Widespread traction is clearly gaining momentum, driven by technical innovation, regulatory acceptance, economics and environmental benefits.