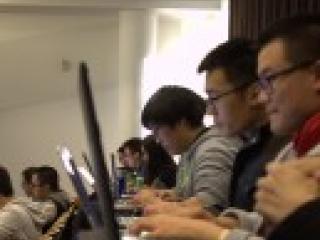 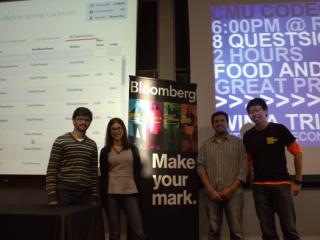 We still have a bit of “March Madness” going on at Bloomberg.

The latest installment of our campus-based Bloomberg Codecon competition came to Carnegie Mellon University (CMU) on March 17th. Over 100 students from Carnegie Mellon’s School of Computer Science tested their skills, attempting to solve six programming problems with varying ranges of difficulty in just two short hours. The stakes were high, with the top three finishers guaranteed an invitation to the Codecon Finals hosted at the Bloomberg Headquarters on May 1, 2015.

Codecon was created by engineers from Bloomberg’s R&D team to challenge developers with unique problems and encourage them to push their skills to the limit.  Questions are not only meant to be difficult (with 5% – 25% success rate) but to have real world applications as well.

The CMU competitors dove into the competition and rose to the challenge, with three finishers emerging in record time:

Aside from owning CMU bragging rights, Jakub, Raymond and Jason will  join students from the 11 other universities vying for the Bloomberg Cup. During the finals in New York they will  have the opportunity to compete side by side with their peers from around the US in the dynamic environment of our global headquarters at 731 Lexington Ave.

To date, Codecon competitions have taken place at Columbia, Cooper Union, SUNY Buffalo, University of Florida, UPenn, Virginia Tech and Stanford.  Remaining challenges will take place at Purdue (4/16) and MIT (4/18) before the finals competition on 5/1.

With only a month left, we expect the remaining competitions to be just as fierce as what we experienced at CMU. You can keep track of the Codecon 2015 standings and stay tuned for more updates on the competition and finals.