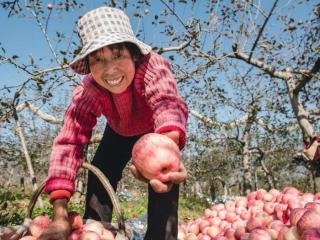 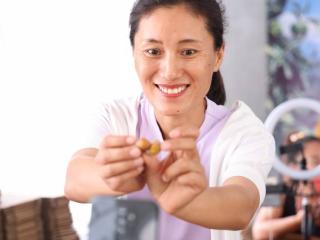 During the world’s largest retail event earlier this month, over a million eyes turned to a chestnut farm in rural China as 37-year-old Han Wenliang livestreamed sales of her produce.

“We saw viewers transform from strangers to loyal fans,” she told Alizila of the 1.5 million consumers who tuned into her stream with key opinion leader (KOL) Zhu Dan on Alibaba Group’s business-to-consumer marketplace Taobao during the 11.11 Global Shopping Festival.

Crops and computing may seem polar opposites, but Alibaba’s platforms have made it easy for farmers to try livestreaming e-commerce for themselves.

Many participated in the recently-concluded 11.11 promotion, and the gross merchandise value of over 46,000 agricultural SKUs – from cucumbers and carrots to apples and cherries – purchased during the campaign more than doubled year-on-year.

These farmers helped make the festival more diverse than ever before, according to the Social Responsibility Report released by Alibaba on Nov. 10.

“This year’s 11.11 has been the broadest and most diversified participation from across society. New livestreaming hosts, well-established brands, young entrepreneurs, overseas brands, farms, fisheries – they’re all here,” said Trudy Dai, Alibaba’s President of Core Domestic E-commerce during an online briefing in October.

Also known as Double 11 or Singles’ Day, the 18-day online campaign dwarfs Black Friday and Cyber Monday combined and is an opportunity for brands of all sizes to access the largest consumer market in the world in purchasing parity terms.

This year 290,000 brands took part and 70,000 brands participated for the first time, including some merchants like Han selling their harvest straight from their fields.

Taobao Live hosted over 100,000 livestreaming sessions from rural merchants, including many farmers, between Oct. 24 and Nov. 11 this year.

‘We see Taobao Live has introduced a new way of doing business for farmers and entrepreneurs,” said Chui Xue, President of Industry Development and Operation Center of Taobao and Tmall.

Han, who hails from a secluded corner of Hebei province, is both.

“It is difficult for us locals to break through into mainstream awareness, but Alibaba has shown us a whole new world with new opportunities,” she explained in Mandarin.

Zhu invited Han on her livestream during 11.11 to share how she grows the chestnuts and the area surrounding her farm.

“Qinglong County is quite remote, situated in the mountains. It’s very hard for people to be exposed to the outside world,” Han noted.

During livestreaming sessions on her own Taobao channel, Han is able to make that leap and offer her 4,000 followers, including many urban Chinese consumers, a glimpse of life in rural farming regions.

E-commerce channels have broadened the horizons of Chinese farmers in more ways than one.

Like many members of her village, Han and her family previously sold chestnuts at lower wholesale prices to businesses, which would resell their products at a higher price to stores.

Livestreaming has allowed her to connect directly with consumers and her success on Taobao Live inspired some 200 of her community to follow suit.

“People now know about us and can shop directly from us on Taobao Live,” explained Han, who has opened her house to neighboring farmers to use for their own livestreams.

But the global shopping festival pushed awareness of farmer-run livestreams to a whole new level, as around 16.64 million platform users bought up 35.49 million agricultural products in the first two weeks of Double 11 sales.

Han hopes the spike in interest will sow more seeds of opportunity in her community.

“People are getting to know about Qinglong chestnuts thanks to Taobao Live,” she said.

How Brands Can Support Sustainable Consumption in Asia