Canada Has the Potential To Lead the Global Energy Transition

‘We produce it cleaner than everyone else, and others want it,’ Enbridge’s Colin Gruending tells Energy Disruptors Summit 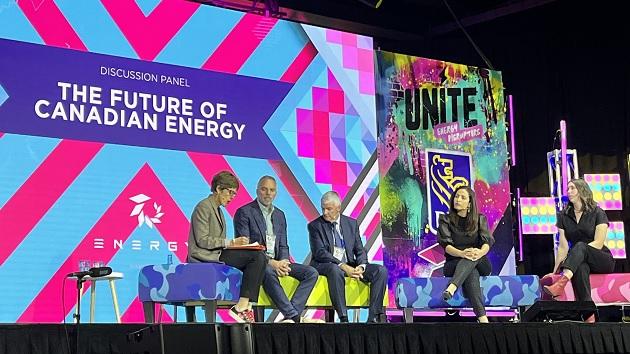 When it comes to energy and to the energy transition, Canada has yet to embrace its vast potential to lead.

This observation was offered up by panelists on Tuesday evening at the Energy Disruptors Summit in Calgary, during a mainstage discussion entitled The Future of Canadian Energy. The panel of four included Colin Gruending, Enbridge’s Executive Vice President and President, Liquids Pipelines.

“Canada has everything it needs to meet the world’s energy needs,” said Gruending. “We have more energy than we need, we produce it cleaner than everyone else, and others want it, so let’s go!”

Simply put, Canada’s bounty of natural gas—which is among the world’s cleanest—could be turned into liquified natural gas for export, which would go a long way towards displacing dirtier fuels such as coal, particularly in the generation of electricity.

Greunding noted that Canada’s struggle to get its clean energy to market goes even further than lost opportunity. The country—with its many advantages—has a “duty” to the world in the battle against climate change, he said.

Panelist Nagwan Al-Guneid, director at the Business Renewables Centre-Canada, a Calgary-based non-profit working to grow Canada’s renewables industry, identified Canada’s patchwork federal and provincial environmental policy, especially around emissions targets, as sending the wrong message to investors. The inconsistency and antagonism between jurisdictions inside Canada are hindering considerable wind and solar potential in Alberta and other provinces, she said.

“Canada needs certainty. When a province like Alberta is not showing up as a partner in the national commitment to decarbonize, and there’s fighting against the feds . . . against the environmental community, it’s a narrative that’s not helpful. It’s creating big investment risk,” Al-Guneid said.

This marks the third Energy Disruptors conference and the first in-person event since 2019. The conference continues through Thursday, Sept. 22.