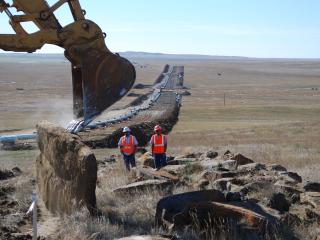 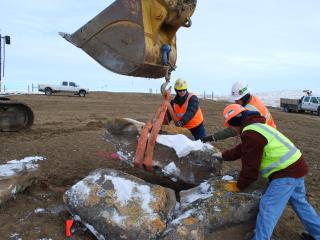 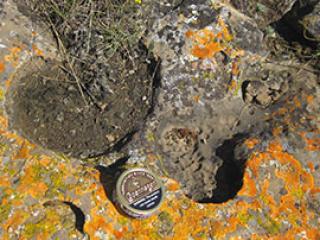 Atop a natural rise in the gentle rolling hills in Carter County, Montana, looking across the grasslands as far as the eye can see, is a cluster of nearly 40 boulders of varying sizes. Some of them are quite large and covered in brightly colored lichen while others are smaller, nearly hidden under the brush that has grown up around them.

One special rock, however, reveals something sacred — a depression in the stone rubbed smooth from generations of spiritual offerings made there to Mother Earth by American Indians as many as 500 years ago.

That find in 2010 proved important because it ensured the previously unknown site would be protected for hundreds of years to come. It also laid the groundwork for TransCanada’s Native Americans Relations Policy, which recognizes the significance of the land and traditions, and the importance of building relationships based on mutual trust and respect.

“How we separate ourselves is really quite simple — we respect traditional territory,” says Lou Thompson, manager, U.S. Tribal Relations, TransCanada.

The unanticipated discovery was made during the construction of TransCanada’s Bison Pipeline Project, a 303-mile gas pipeline that begins in northeastern Wyoming and travels east through Montana and North Dakota before connecting with Northern Border Pipeline in North Dakota.

School Is Expensive, We Can Help

Safety Matters: Carrying Out Safety in Our Every Day