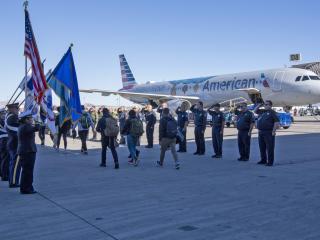 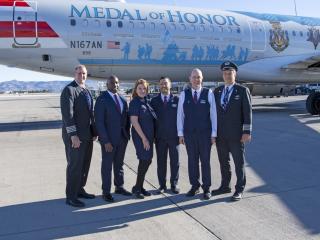 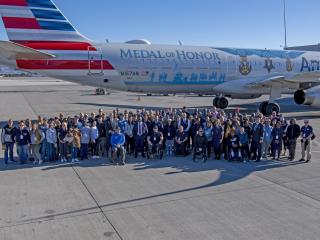 FORT WORTH, Texas, December 1, 2022 /3BL Media/ - This past Veterans Day weekend, American Airlines hosted wounded and ill servicemembers from Walter Reed National Military Medical Center and their guests at the 13th annual Salute to the Troops event in partnership with MGM Resorts and the USO. American and its partners continue to build on a long history of supporting military servicemembers — past and present — and honoring their selfless sacrifice.

An all-veteran crew, who volunteered their time and talent, transported the group of 190 participants from Washington, D.C. to Las Vegas. They flew onboard Flagship Valor — an Airbus A321 with a special livery dedicated to recipients of the Medal of Honor, the highest award for military valor in action.

“My time in the Navy was my proudest moment, so I wanted to work this flight to give back to other veterans,” said American Airlines Flight Attendant Josh Williams. “Having the military camaraderie is rewarding, and it brings me back to when I was active duty. It feels good to give back and be part of a company that acknowledges my sacrifice and the sacrifices of others who gave their life to the military.”

Salute to the Troops has been held annually for more than a decade and offers active servicemembers an all-expenses-paid trip to enjoy four days in Las Vegas. The group received a warm welcome from American team members at the airport and a police escort to the hotel, where hundreds of people gathered for a welcome procession at Mandalay Bay. This weekend, they will participate in a variety of activities, including dinners, live performances, musicals, and a tour of the Hoover Dam and Red Rock Canyon. The trip promotes fun, relaxation, and healing and serves as a small thank you for their service.

“This Veterans Day weekend serves as a unique opportunity for me and my fellow servicemembers to build on our experiences and the camaraderie that we’ve built during our service to this great nation,” said Army Veteran Jeremy Haynes. “But it would not be possible without the support of MGM Resorts, USO and American Airlines, as they put a lot of effort to ensure that we recognize and celebrate those who have served our country.”

American supports the military community year-round, which includes supporting nonprofit organizations and utilizing its fleet of aircraft for special missions like Salute to the Troops. In May, American celebrated the 250,000th veteran to participate in the Honor Flight program — a historic milestone for the Honor Flight Network, a nonprofit organization that provides veterans trips to visit the nation’s capital and the memorials erected in their honor.

To Care for People on Life’s Journey®. Shares of American Airlines Group Inc. trade on Nasdaq under the ticker symbol AAL and the company’s stock is included in the S&P 500. Learn more about what’s happening at American by visiting news.aa.com and connect with American on Twitter @AmericanAir and at Facebook.com/AmericanAirlines.

Advocating for Equal Treatment for the LGBTQ+ Community

Building on a Long-Standing Commitment to Pay Equity