From Wildomar to Rosemead, High Schoolers Get an Edison Scholars Surprise

Thirty seniors will receive a $40,000 scholarship each in their pursuit of a STEM degree. 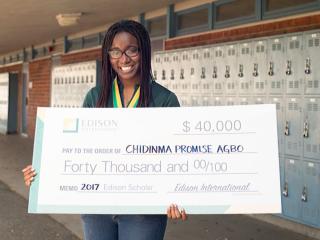 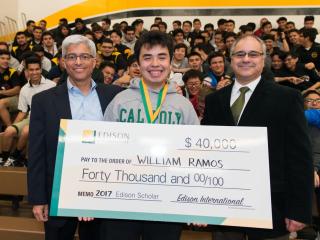 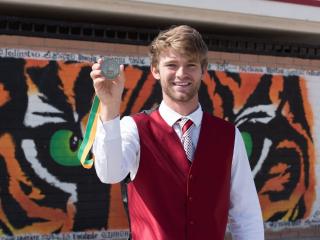 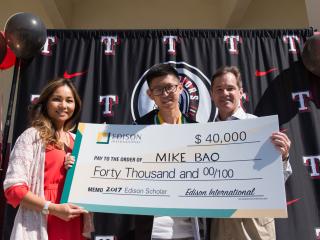 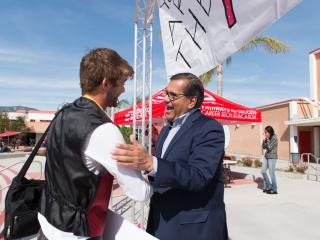 When Promise Agbo, 17, was 6 years old, her father would often take her outside to look at the stars in the sky.

Ten years later, she accepted an internship at NASA where she was able to work on the Mars Mission. Her idea: a hybrid spacecraft that once deployed would break off into a satellite and land rover. Her idea was so good it was presented to the NASA administration.

“I like to explore something that we never knew about,” said Agbo, who hopes to one day work at NASA as a space flight engineer. “Ideas can come to fruition. If you dream a good idea, it can come true.”

The Norwalk High School senior has a GPA of 4.47 and has so far been accepted to 15 colleges. Her dream of attending Stanford came closer to reality Wednesday when she was surprised at a school assembly with an Edison Scholars award.

One of 30 students to be selected, Agbo will receive a $40,000 scholarship paid over four years. Since 2006, Edison International has awarded about $7.7 million in scholarships to 580 Edison Scholars. The program is funded entirely by shareholder dollars, not customers.

In addition to academic success and financial need, students must plan to pursue STEM (science, technology, engineering or math) degrees at an accredited four-year college or university. Applicants must also live in or attend a high school in Southern California Edison’s service area.

William Ramos, 17, is a senior at Don Bosco Technical Institute in Rosemead. On Monday, he learned that his dream of attending California Polytechnic State University, San Luis Obispo to pursue a degree in chemistry had become a reality.

“I heard you have big dreams,” said Pedro Pizarro, Edison International president and CEO, as he handed him an oversized green, yellow and white check for $40,000. “William, you earned this, and we are very proud of you.”

“I promised my parents that when I go to college, they won’t have to worry about a thing,” said Ramos, an aspiring teacher, as his fellow classmates cheered their support at a surprise assembly. “Now, with this, everything is relaxed. It makes everything so much easier.”

This year alone, Edison International will give out $1.2 million in Edison Scholars awards. The 30 winners represent the diverse communities across SCE’s service territory, from Hanford to Newport Beach.

In Wildomar, Dylan Dickerson, 17, a senior at Elsinore High School, was recently recognized as the school’s valedictorian. During the ceremony, he was also named one of this year’s Edison Scholars.

As he held back tears, Dickerson — who hopes to attend the University of California, San Diego and major in mathematics — accepted the $40,000 check and thanked Gaddi Vasquez, Edison International and SCE senior vice president, Government Affairs, who was on hand to deliver the award.

"This is just an amazing blessing,” said Dickerson.

Mike Bao, 17, a senior at Troy High School in Fullerton, was already doing real analysis and statistical mechanics at a young age.

With a $40,000 check from Edison International, his dream of earning a physics degree from Harvard is now a giant step closer.

“I want to prove to the world that science is cool,” he said.