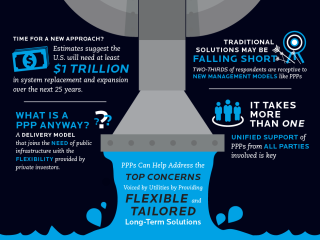 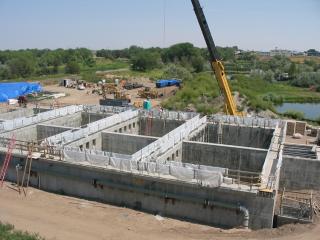 Water and Wastewater Industry Can Address Funding Challenges through Public-Pri…

As water and wastewater utilities are challenged to minimize rate increases while balancing limited budgets – complicated by deferred maintenance, chronic underinvestment, competing projects and compliance mandates – one solution to consider is the public-private partnership (PPP) model.

“The PPP model can restructure and provide capital to help the utility manage its existing system assets or implement new capital improvement projects,” said Bruce Allender, Chief Operating Officer of infraManagement Group LLC (iMG), a wholly owned subsidiary of Black & Veatch. “Additionally, it allows the transfer of risk from the utility to the private sector while protecting the ratepayer. It provides for the optimization of life cycle costs and alternative management of these costs.”

Allender said another variation on the PPP model is leveraging the water and wastewater assets of a city to fund citywide needs, such as economic development initiatives or unfunded pension liabilities.

The most significant hurdle in broader PPP adoption is the lack of understanding of the model and subsequent uncertainty and distrust, Allender noted. Education is the key to help utilities and cities understand how they can leverage the PPP model to support their cost of service and mitigate risk for their ratepayers. More industry association and government initiatives are aimed at helping cities to better understand the benefits of a PPP for their utility.

“There are varying definitions of PPPs, which often create confusion in the market,” Allender said. A broader definition of a PPP is that of a delivery model that joins the need of public infrastructure with the capital, risk transfer, life cycle asset management, optimization of life cycle costs and flexibility provided by private investors.

“The PPP model can be tailored to fit specific utility and city needs,” he added.

Francesca McCann, Business Development Director for iMG, who has extensive experience with investment and PPPs, said it is important to distinguish PPPs from outright privatization.

“Privatization implies selling the entire assets of a given entity, while through a PPP, the government entity retains ownership of the assets – facilities, pipes, right-of-ways and pumps,” McCann said. Depending on the specific agreement, the government can then turn over the operations, maintenance, investment or finances of the organization.

“PPPs are truly a partnership between the public and private sector, not an asset sale,” McCann said.

While use of the PPP model in other sectors, particularly transportation, is common, the market for PPPs in water and wastewater is still relatively nascent in the U.S. Despite successful implementations globally, in the U.S, large-scale, privately financed water and wastewater projects are few. However, McCann said there is a growing trend toward at least the consideration of the approach.

“Political constraints – often based on misdirected skepticism of privatization – have kept PPP solutions largely at bay in the U.S.,” McCann said. “This is occurring even as the industry openly questions how conventional financing strategies, such as higher rates or municipal bonds, can meet a ballooning bill for system replacement and expansion.”

For instance, the American Water Works Association has conservatively projected the tab for replacement and expansion at more than $1 trillion over the next 25 years. The figure only reflects drinking water assets and doesn’t account for systems such as wastewater and stormwater.

While municipalities are still relying heavily on traditional funding mechanisms, including ever-declining state revolving funds and grants, there does appear to be an increasing receptiveness to new management models, such as PPPs. According to the 2016 Black & Veatch Strategic Directions: U.S. Water Industry report, two- thirds of survey respondents said they might or would consider a new management model to help fund or manage assets.

Benefits of a PPP

There has been a significant movement in PPP models over the past few years that is beginning to address the traditional barriers that have prevented PPPs from being more commonly used by the water sector. Key attributes of various models include the ability to: