Tech-and-Trades Mastery at the 'Olympics of Skills' 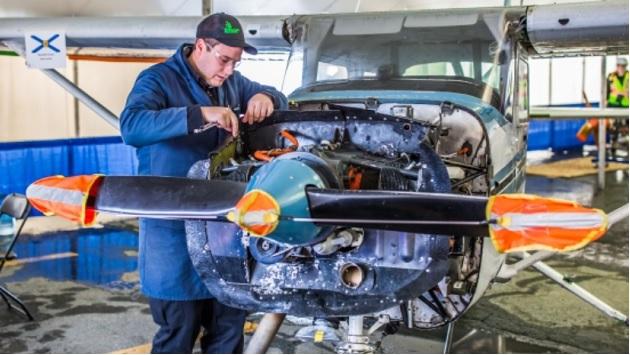 It’s a common dream for many to turn pro—but in pursuits like soccer, hockey, volleyball and . . . machinery?

That’s a possibility with Skills Canada, and its Nova Scotia chapter has been performing exceptionally on a national and world stage for years in skills pertaining to trades and technology.

“We have provincial, national and world skills competitions to which, in a non-pandemic year, we send people all over the world to compete against the best,” says Jennifer Lambe, Partnerships Manager at Skills Canada - Nova Scotia.

“It could be a plumber from Cape Breton that goes on to be the greatest plumber in the world—but you have to know the opportunity is there.”

The national body of Skills Canada was established nearly 30 years ago out of a need to increase awareness and encourage uptake of careers in the trades while the workforce struggled to maintain workers due to retirement.

Skills Canada - Nova Scotia is one of many chapters that make up Skills Canada and sends its top competitors all over the world to compete on a world stage.

Skills Canada - Nova Scotia offers no shortage of training for almost every hobby and activity under the sun, and the pandemic forced the organization to get even more creative in how it could provide students with hands-on learning—while maintaining social distance.

Enter the Try-A-Trade® program, which gives teachers an opportunity to register their class for activities such as cooking, carpentry, photography, machining, and graphic design.

“We had hoped to reach 500 kids in a few months, but after only a couple days after registration opened we were already full,” says Lambe.

In late 2021, the Maritimes & Northeast Pipeline, an Enbridge company, made a $5,000 Fueling Futures donation to Skills Canada - Nova Scotia as part of our commitment to improve quality of life in communities near our operations. The funding helps the organization fund travel for competing teams, deliver programs and more.

“It’s really partners like Enbridge that make what we do possible.”

Every two years, competitors from across Canada take part in the WorldSkills Team Canada Selection Event. In 2019, one of Nova Scotia’s own, Zach Walsh, was selected to represent Canada in the refrigeration and air conditioning category in Kazan, Russia. Walsh put on a memorable performance that earned him a Medallion of Excellence.

Over 10,000 students are reached each year through the many mechanisms of Skills Canada - Nova Scotia, from presentations to workshops to videos and competitions.

The virtual offerings of programs developed during COVID-19, like the Skilled Future Virtual Experience, are here to stay, but Lambe and her team are looking forward to returning to their core mission and making hands-on, hands-on again.

“We care a great deal about gender parity in the trades and encouraging open workspaces for any individual regardless of their background or belief,” says Lambe.

After wrapping a successful 2021, the organization is looking toward the national competitions this spring, with full confidence that they’re on track.

“Labour jobs demand people—that’s it. It’s going to pave the way in our economic recovery, and we want to make sure these career paths are accessible and visible to anyone who could be interested in it.”