Small Talk: How Bayer Is Keeping an Ear to the Short Stature Corn Conversation 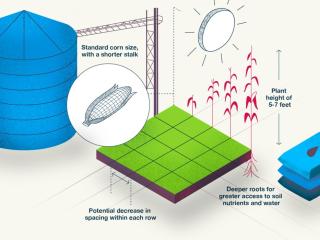 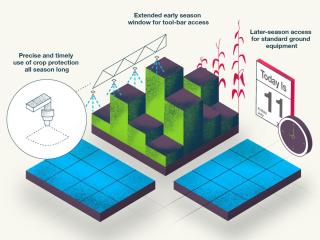 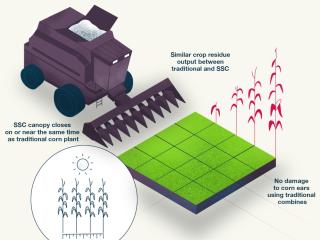 With several successful trials complete and others underway, Short Stature Corn (SSC)* continues to evolve from a “what if?” to a potentially beneficial reality. As more growers take notice, they naturally have plenty of questions around how this new-look corn crop might take shape in their fields.

Let’s explore five of the most common SSC questions we’re receiving so far – and begin unhusking the facts around this unique innovation.

How can a small plant return a sizable yield?

It’s easy to automatically associate taller corn plants with higher yield, and see smaller plants as either sick or non-productive. However, SSC is neither of those things. It isn't a miniature version of other corn varieties. Besides the shorter stalk height, SSC maintains similarly sized leaves, ears and general agronomic characteristics to taller traditional varieties.

In fact, SSC's size provides advantages that can help farmers achieve an even greater yield compared with their counterparts. The shorter and more stable stalk enables growers to access their fields with equipment later in the season while also enabling closer and higher-volume planting. Once planted, SSC varieties' roots can explore a broader soil range faster than their traditional counterparts, accelerating the potential for better access to the water and nutrients critical for standability and durability.

Will SSC require a change in my crop residue management processes?

Growers may see the "short corn" name and assume these plants will produce less crop residue (including roots, husks and disposable materials). However, while SSC does produce less stalk material, the remaining plant biomass resembles that of its taller counterparts and is responsible for neutral or potentially more residue management compared to current varieties.

The similarity in crop residue output between traditional corn and SSC largely stems from planting density. By itself, a single SSC plant produces roughly 10 percent less crop residue than a single standard corn plant. However, since growers are likely to capitalize on SSC's size and plant more seeds per field, the increased number of plants in play creates nearly even or more crop residue overall. With that said, we do not expect any significant change in crop residue management processes.

The management and optimization of SSC relies on the same core crop management pillars (such as nutrition and mitigation of diseases, pests and weeds) as traditional corn. If anything, SSC will give growers greater control over their fields and allow for more careful and deliberate crop care throughout the season.

SSC offers growers greater flexibility to apply crop protection, nitrogen and other critical inputs more precisely and when needed, rather than through single, widespread and more burdensome applications. The crop's structure, which features both a canopy that closes at or near the same time as traditional corn plants and embedded herbicide tolerances, also complements growers' weed management efforts.

Additionally, SSC's distinct characteristics offer growers the potential for an extended early season tool-bar access window, all while ensuring season-long access for standard ground equipment (with a clearance of at least 5 feet).

Will I need to purchase new equipment to adopt SSC?

No, growers will be able to use their existing planting, harvesting, and nutrient and crop protection application machinery to introduce and manage SSC within their fields. As an added bonus, SSC creates new possibilities for growers to use their equipment more strategically and efficiently throughout the growing season.

Even at a reduced height, SSC stalks still will go through traditional combines and growers can drive over and through fields as normal. With that said, we continue to test and evaluate SSC's performance across a variety of terrains and field structures to ensure compatibility with a host of global land dynamics.

While we have seen early SSC varieties perform well in drier climates, it's too soon to know if SSC is more drought tolerant. We continue to test SSC's response to varying environmental conditions – much as we evaluate herbicide and pest resistance traits – and remain committed to delivering seed varieties that meet growers' needs.

SSC is on the horizon for Bayer and the growers we serve, and we continue to trial, pilot and characterize hybrids around the world. Given our progress, we're optimistic that customers will have the option to try SSC for themselves within the next few years.

In the meantime, we're encouraged by growers' initial curiosity and excitement around SSC. We look forward to continued dialogue as we move closer to commercialization. Keep the questions coming - I welcome the chance to answer them!

*Note: Bayer currently is pursuing pilots and field testing with Short Stature Corn varieties developed through traditional plant breeding, and our commentary reflects observations from this approach. We additionally are evaluating biotechnology and gene editing approaches to SSC for potential future application. 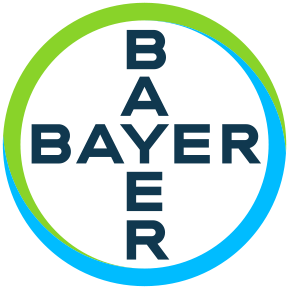 Bayer: What Does Agriculture Need?