Edison International is partnering with the nonprofit to help veterans reintegrate into the community. 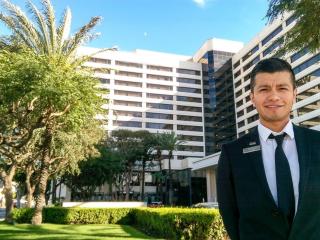 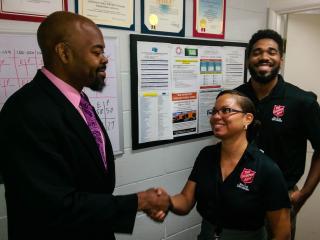 Cris Zavala, a 15-year Navy veteran from San Diego, relocated to the Los Angeles area in 2016, seeking a career change and a new start, knowing few people in his new city. Thanks to help he received from the Compton office of the Salvation Army Haven Veterans Employment Services Program, he discovered a new career.

“I was looking for something maritime-related,” said Zavala. In the Navy, he assisted with radar operations and plotting courses for ships. He left active duty in 2009 as petty officer second class and remains on reserve duty. After 2009, his employment included part-time work as a deckhand and first officer on dinner and private event cruises.

Zavala’s “career coach” at the Salvation Army helped him structure his resume, practice interview techniques and choose attire for interviews. The coaching helped him land a job as a front desk agent at a large hotel near Los Angeles International Airport. Now, after one year, he is planning to earn a diploma in the hospitality industry.

“As long as you’re committed and give it your all, you’ll get results,” said Zavala, whose success story mirrors hundreds of others across Southern California resulting from the Salvation Army’s Community Integration and Employment Services Programs.

“One of the ways Edison honors veterans is by providing charitable support to programs that help them thrive once they’ve returned to civilian life,” said Lisa Woon, SCE principal manager of Corporate Philanthropy. “We are investing in organizations that are providing vital job training services to help address the employment needs in our community.”

According to Lisa Anderson, the Compton chapter’s community integration manager, the program assists about 200 veterans each year. The goal is to get veterans employed within three months. “We stay in touch with them for up to nine months” to monitor their progress, she said, and help them overcome obstacles to staying employed, if needed.

“It can be as simple as helping a noncomputer-savvy veteran set up their email account and learn to apply for jobs online,” said Anderson, who noted that the program achieved a 78 percent placement rate last year. “Some of our veterans need interview clothing or transportation, which we can fund.”

For Maribel Velasco, an Army veteran who served in the 1980s as a mechanic and retired as a specialist in 1991, the program provided a range of support services after she was laid off from her job last January.

“They gave me some job leads, sent me to job fairs,” she said. “They gave me money to buy clothing for job interviews at a time when I couldn’t spend money on clothes.”

“Maribel just needed someone to encourage her and tell her she could do it,” said Krystina Robinson, Velasco’s career development specialist.

With the program’s help, Velasco landed a temporary position at a freight forwarding company in August and was made a full-time employee in December.

“It’s really rewarding work, but it’s a two-way street,” said Robinson, whose husband is on active duty in the Air Force. “We do the coaching, but they have to be dedicated to their job search.”

To hear more from veterans at Edison and to explore current job openings, visit edison.com/veterans.